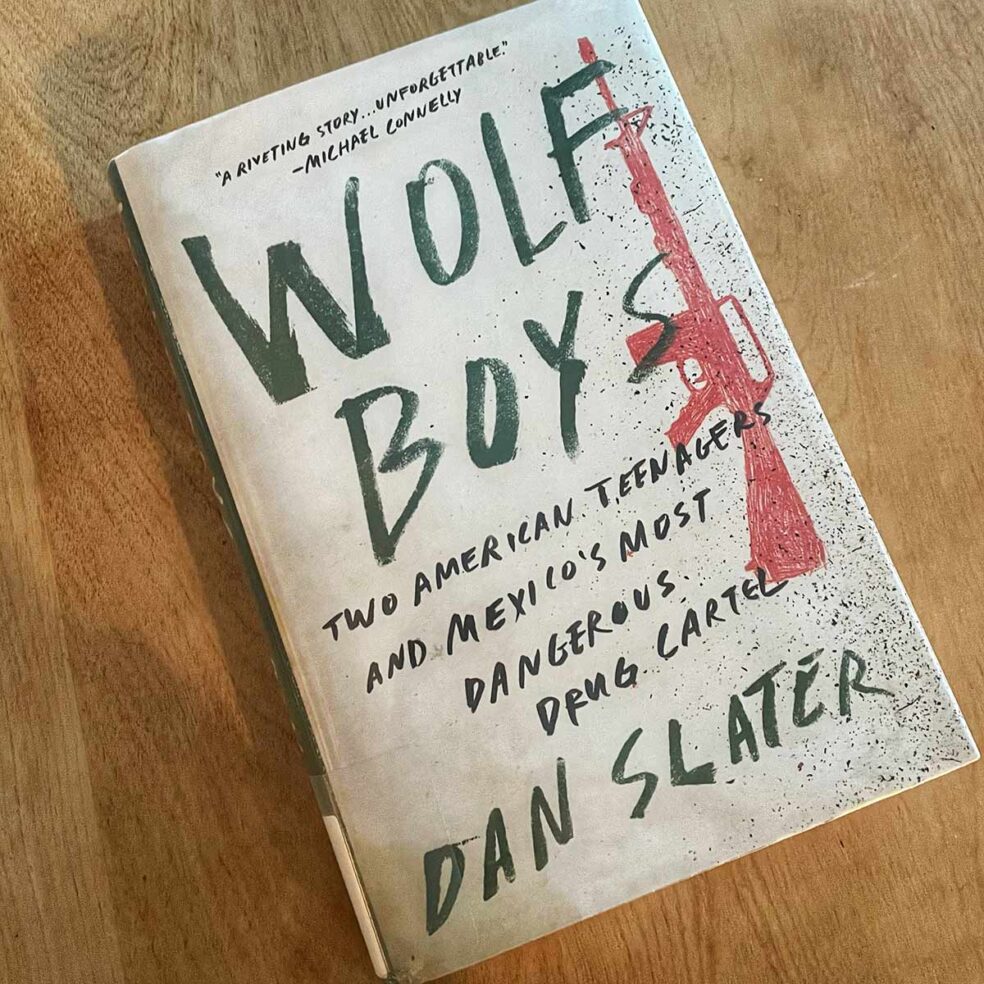 Sometimes I get accused of reading too many books like this. People ask me what I am reading, I tell them, and they make some comments about not wanting to read this kind of book because they find them too depressing. And then they wonder how our society got where it is. I read books like this because I am learning about our culture and society. The good, the bad, and the ugly.

I am continually amazed at how little people know about their city, their state, and their country. (How about those Americans who don’t know New Mexico is part of the US for example.) Dan Slater’s Wolf Boys covers Laredo and Nuevo Laredo a piece of the world that I used to know fairly well. And my family at one time had a tiny business in the area. I even know a relative of someone mentioned in this book and talk about learning, I was afforded an entirely new perspective on just how these folks made their money.

Wolf Boys at its heart is a tale of two worlds. This side and that side. Told through the eyes of a “spillover” kid, an American boy working for the cartels, and a cop on the American side working for the DEA and the Laredo PD. Cartels, hierarchy, plaza bosses, torture, jealousy, power, corruption, greed, survival, lack of options, and legacy of the lavadita. Not to mention the drugs north, guns south model that most Americans still seem unclear about.

There is a lot to love about this book, and I know love might be an odd choice of words but if you are fascinated by the history of this story then this book is well worth your time and effort. I love Mexico and used to love South Texas. Other than telling you to get it, read it, I’ll share ONE thing about this book that even I was still somewhat amazed by. Spillover. Meaning the drug war in Mexico spilling over into the US.

The cartels are now operating in close to 250 cities in the United States. This part is not that shocking. What IS shocking is the full-on battle for Laredo. Cartels hit teams pulling off daylight assassinations, kidnappings, extortion, etc. Brazen. And cops on the take. This is real and this is now.

Last year I got pulled over, again, in Southern New Mexico while trying to work on a project. He approached my car asks me what I’m doing. I tell him. He says “You can’t do that and you can’t be here.” Both of these statements were entirely false and frankly a breach of my rights but that was not how I took it. I was on a public highway inside the United States. What we meant was “If something happens to you I’m the one who has to come and try to save you and I don’t want to go where you are going.” This, I totally understand.

And for anyone who wants to direct the blame in one direction, at Mexico, think again. We are the world’s largest consumer of illicit drugs. The demand is insatiable. Why? Go ahead, take yayo and mota out of it. You still have the prescription drug war. There is something lacking in us, in our culture and society that drives us to guns, drugs, and violence. Before we aim the blame we need to take a good, hard look in the mirror.