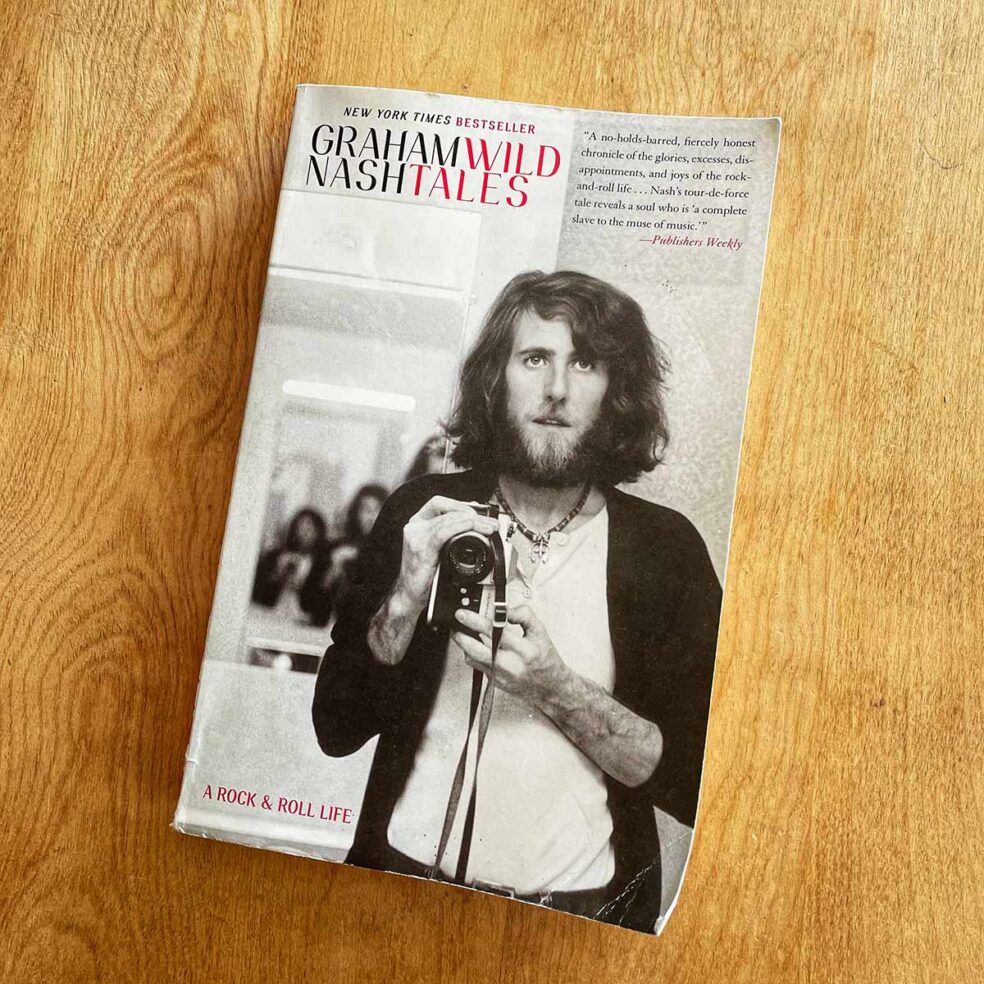 Being a rock star, cool. Being a photographer, cool. Combine them both and what’s not to like? Combine them both and get one Graham Nash. Wild Tales, by musician/artist Graham Nash, is in some ways precisely what would expect from a rocker turned author, but in other ways is a personal and professional history lesson with chapters meant to pull back the veil.

I love music, and I believe the period from the late 1950s to the early 1980s was the most profound period of the modern music era. Just take the 60s and you have an endless legend. Same for the 1970s. And Nash was right in the middle. From an impoverished Northern England town, his odds of realizing the dream were slim at best. And yet there it began with his “eight pints a night” bandmates, underground, bunkerlike clubs, and tooth and nail tenacity to get it done. Born from these ingredients was “The Hollies,” and the rest, as they say, is history.

Nash is honest, heaping praise on the deserving while aiming pencil-beam sentences at those prickly in parts. I’m sure each of these scenarios has juicy backstories.

What I took from this was Nash’s intense love of music. Through the breakups and mendings, the blizzard of cocaine, and the egos that run parallel to talent of any kind. Through it all, f^%$ the rest. Play the music. Even after the partnership with Crosby, Stills, and the wildly unpredictable Neil Young, when you think “there is no way these guys will ever talk to each other again let alone play together,” somehow things would gel. At least enough for a night or two.

I also loved the insight into creative collaboration. Songwriting in particular. Joni (Mitchell) would write a song, someone else would hear and ask “Can I have that?” Same for CSNY and a wide range of others including some would never think to put together. I’m sure this still happens, at least to some degree, but the era that Nash came alive was lighting in a bottle. Geopolitical awakening, war, and a rapidly changing global society. (Some would say nothing has changed.) Walls were built, corruption became mainstream, lines were drawn in the sand but the music began to blow it all apart.

On top of all this, you learn about Nash’s love for the camera and his close relationship with photographers of the era. Henry Diltz, who is one of the coolest photogs I’ve ever met, and one of the funniest, as well as Joel Bernstein who was a close, close friend of Nash for forty years. The “Nash Era,” was also the era that launched a subset of writers and photographers as well. From Dr. Thompson to Annie, Marshall, Claxton, Law, Kirkland (80+ and still shooting every day.), and many, many more.

For those of you LA types bent on looking at life through a small rectangle, you might remember the print operation “Nash Editions,” which was one of the first high-end, boutique-ish print ops of the digital print era. Iris on to inkjet when nobody quite knew what that was. Just think about this, any book that mentions both Jimi Hendrix and Henry Wilhelm is a total fuc^%$# anamoly.

Full disclosure, my wife’s favorite band of all time is CSNY and she actually knows Graham a little bit through her time at Canon. Hell, I met Graham once, and David Crosby and Rob Lowe of all people….on the same night. Thank you Santa Barbara Bowl. I’ve also been dragged to more than a few CSNY shows where my wife would promptly ditch me while making her way to the front row. (She is a master at this.) I would end up nursing a drunk guy who was about to fall off the top row at the Staples Center while screaming, “This is IT, these guys are NEVER going to play together AGAIN.” (True and painful story.)

Lastly, this book makes you want to play music. My guitar is now in the living room and man do I suck at guitar. But it doesn’t matter. My singing voice could be classified as a biohazard but that doesn’t matter either. Because later today, thanks to Graham, I’ll be belting out Judy Blue Eyes at top volume while mangling my three chord limit.