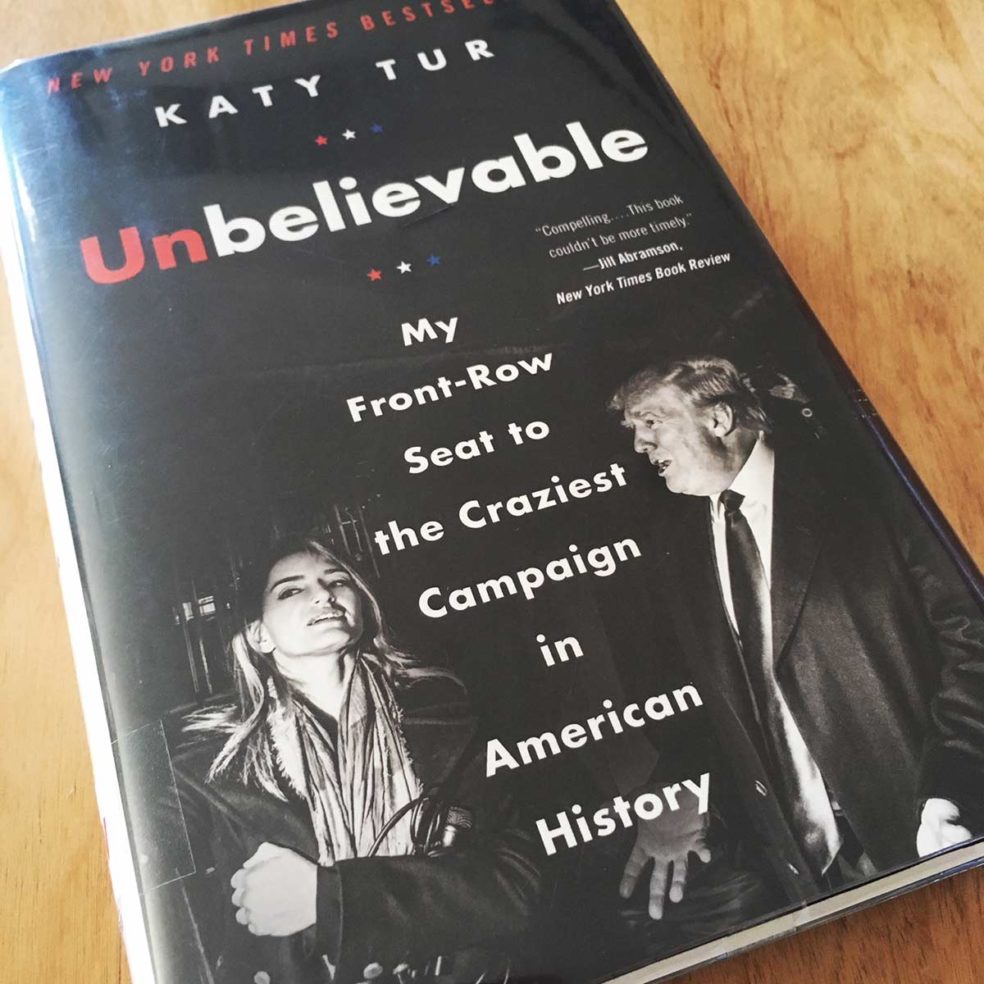 This book is a train wreck, which is why I read it. You know going in what you are about to find, most of which has already been well played out over the past year, but the small behind-the-scenes details are so strange, odd, awful and puzzling it’s so worth the rage or depression you will embrace after the first few paragraphs.

I LOVE political journalism, and over the past decades we have seen some truly amazing work in this field. This work, like all other forms of journalism, has been so watered down, so politicized, so trivialized in a race for speed and celebrity correspondent juice that most of what comes out today is the kind of coverage akin to skipping a flat stone across a pond, or sewage treatment holding tank in this case. But, if you are like me you will continue to consume any and all books covering politics. By the way, I’m not bagging on Katy Tur’s book, not at all. It is precisely what I expected it to be. And remember, a book like this comes fast, hot and heavy, so what you should aim to learn from a book like this might only be one or two small things you didn’t know before.

This book directly and indirectly reminded me of a few things I already knew but still want to deny.

1. We are a racist country.
2. We are a sexist country.
3. We lie.
4. We are as corrupt as any other country, competing for pole position with N. Korea, Venezuela, Russia and China to name a few, but a significant portion of our population refuses to believe this and still lives under a 1950’s idealistic view of what America is.Compounded by the fact that even discussing this reality makes someone “anti-American.”
5. The Freak is the embodiment of all these things, a racist, sexist pathological liar who creates his own reality on a minute-by-minute basis in an attempt to enrich himself at the expense of ANYONE who gets in the way including nature.
6. The Republican Party went to bed with The Freak. They didn’t want to but once they knew he was the only horse in the race they firmly and enthusiastically saddled up and got behind this loser and should never ever be allowed to forget this action. (The Paul Ryans of the world. Watch what happens with these bozos if The Freak is found to have obstructed justice.)

The Freak behaves like a multiple personality disorder case when he is around Tur, who as you can see by the cover image, is NOT an unattractive human being, and I’m guessing his behavior, in part, is due to the fact he is enamored with her but is also in denial about how repugnant he is. (This brings up topics I want no part in touching, but based on my own personal experience in journalism, women take a beating doing this work, for all kinds of unfair reasons, so next time you see a professional, female journo just know, she’s earned it.)

Another piece I enjoyed was her take on why journalists are so despised. Yes, The Freak caused so much hate during the campaign that the journalists covering him required private security, but Tur’s point is that journalism shows us, tells us, things that we don’t want to hear or see or even understand. Let’s just take The Freak’s “pussy” comment. Just this week the evangelical right said “Oh ya, all that shit, he get’s a mulligan.” And even The Freak himself said a few weeks ago, “Oh ya, that tape, that’s not my voice.” And 46 million people said “Yep, that’s not him.” We now live in a world where we write our own narrative. What’s lost? Math, science, truth, fact, compassion, understanding and critical thought.

“Unbelievable,” is a fast read, like the content being covered, but it’s worth the time and energy.