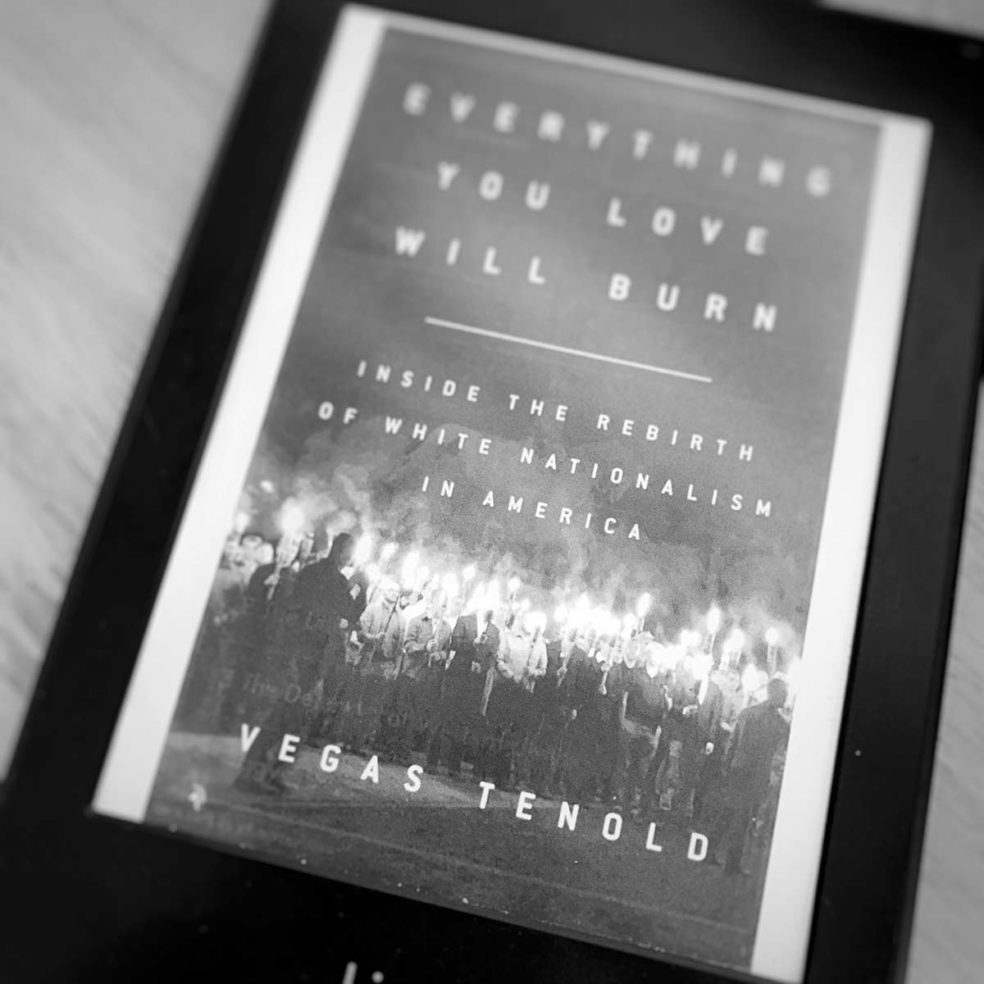 White Nationalism is a truly odd thing. This book does a solid job of helping people like me comprehend the nuances, the ideology and the mission of many of these groups that seem to be coming out of the woodwork these days.

But before we get into this let me say the author of Everything You Love Will Burn, Vegas Tenold, began this book years before Donald Trump was even uttered in political circles and long before the “alt-right,” or “hard right” or whatever else you want to call these people came to the level of prominence they have today.

This book begins with a bit of history but quickly becomes a personal narrative of both the author, who is a journalist who somehow got access to these folks and a few prominent members of the White Nationalist community. Although the hardcore KKK style and skinhead style WN are out there, the new breed is a much scarier version that comes on soft and easy as they try to slowly indoctrinate others to into their fold.

A few takeaways for me. Many of these folks are lost and lonely. They are searching for belonging and the Internet has made community building, regardless of how alt these communities are a relatively simple procedure. Also, there are many, many divisions within the groups, and most of these groups have been around for a long, long while but have ebbed and flowed in terms of membership.

I also found the Trump angle interesting. I think one of the misconceptions of White Nationalists was that they were totally behind Trump from day one. I certainly thought this. Apparently, many were not. Most had WILD views of Hillary Clinton, as they did with Obama. Things like Obama worked for the UN, and the UN was secretly training inside the United States so that they could subvert then take over the entire county. And oh, by the way, the UN created ISIS. So Trump was the lesser of two evils, believe it or not. The WN knew and still know that Trump is racist and does support their ideology when it comes to race but almost immediately, once he had their votes, he left this community out to dry. (At least in their mind.)

They weren’t smart enough to understand they were being conned which is what Trump has done to everyone around him for his entire life. Some of the WN groups were talking impeachment of Trump almost immediately after the election. (Although they are still behind him in many ways and are building their support as Trump makes less and less effort to hide his racism while ramping up talk about the wall.)

Finally, Jews. Call me clueless but I had no idea the primary evil for the WN crowd is, and perhaps always will be, the Jews. You know all the sad rants. The Jews run all business, all banking and all of Hollywood and faked the holocaust. They secretly fund and run all the abortion clinics because their goal is to eradicate white people. Personally, I found this the most bizarre part of the entire book and also one of the most alarming parts. I just kept thinking “Here we go again.”

One of the most startling aspects of the last four years for me is hearing my right-leaning friends making apologies for what our president and his right-leaning cartel have been doing and saying. “Oh, he’s just joking,” they say. Or, “Oh, that’s just Trump being Trump.” Have we not learned a thing in the last fifty years?

I’ll just say this. Students at two schools near our California house were caught making Nazi salutes, playing Nazi music and were also caught handing out Nazi literature on campus. The synagogue closest to our house was spray-painted with swastikas. And my right-leaning neighbors attempted to do two things. First, they denied any of this happened and claimed it was all….wait for it…..”fake news.” And the second thing they did was downplay the seriousness. “Oh, that was just a joke.”

Perhaps the underlying message here is two-fold. Ignorance and hate. Our population as a whole is poorly educated. And we’ve allowed corporations and disparity of wealth to take over and become the norm. The rich get richer and the poor get ground up and consequently, there are A LOT of unhappy people. And the Internet has created a blanket of hate that permeates much of life. I recently read an article about two long-distance cyclists feuding over style and strategy and I just kept thinking “We are the dumbest species to ever walk the Earth.”

This book should be mandatory reading. Get it, read it.