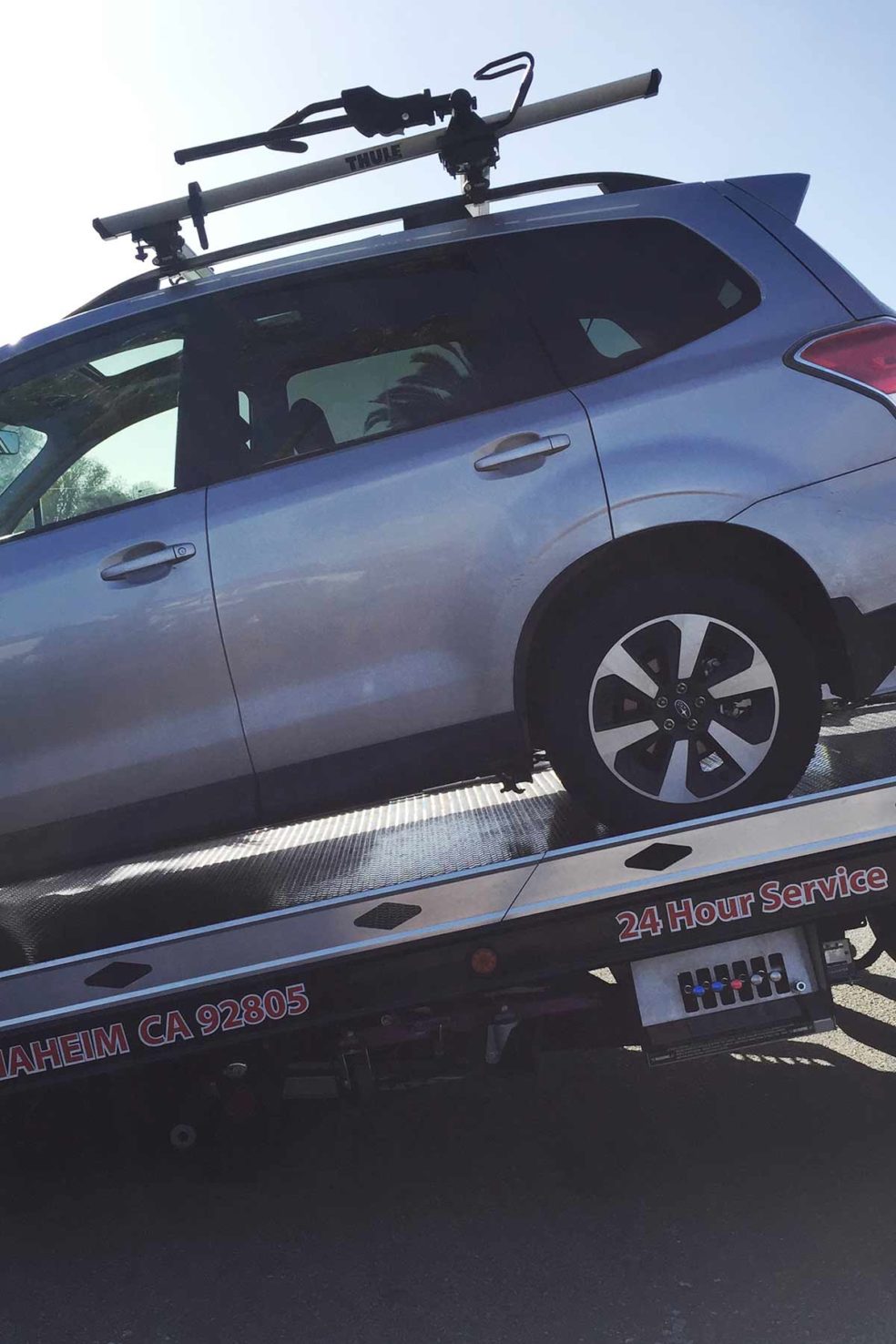 My 2017 Forester getting towed from my house.

I really wish I didn’t have to write this post, but I know some of you are also looking at Subaru, so you should know what’s happened with me before you put money down on a new vehicle. I wrote one post before about what I liked and didn’t like about the car but things have changed dramatically. I know this isn’t creative based blogging, and it certainly doesn’t have anything to do with photography, but it’s still relevant because I know some of you are car shopping.

Where my nightmare begins…

1. I special ordered a Subaru Forester 2.5i Premium, 6-speed-manual transmission back in the September timeframe. I had to order one without actually driving one because not a single dealer I visited had a manual transmission. I’ve always loved a manual shift, so I ordered the vehicle and began the wait. I was super excited about this car because I had just lost my VW to the emissions scandal and was looking forward to not only getting a new car but one that would allow me to go to some of the places I couldn’t go in my VW. A little over two months later my Subaru arrived and was delivered to my house. Only one problem….it was the wrong car. They delivered an automatic transmission. I took the high road and said “Hey, accidents happen.” To her credit the person at the dealership called and said “This is entirely my fault.” It was nice to hear someone own up to the mistake, and I thought I would just have to wait a little bit longer. Two days later they found another car and had it delivered to my house. I was somewhat stunned but happy to have a car.

2. The first few times I drove the car the engine was cutting out. Mostly at highway speed on acceleration. Just slight, quick, hiccups. Like a clogged fuel injector. Quick hesitations. I returned the car to the dealership less than a week after purchase. I thought maybe it was bad gas, so I found out when the car was delivered to the dealer and how long it had been on the lot. Subaru also said “It could be bad gas.” But the car hadn’t been on the lot long at all. They hooked the car up to the computer and it said all was well. The mechanic drove the car and said it was fine. I drove the car with the mechanic and couldn’t get the car to repeat the issue, however we didn’t take it on the highway.

3. I then broke the car in over the next 1000 miles. The engine was still cutting out but with no pattern at all other than on acceleration to highway speed, and even then it wasn’t, and still isn’t, consistent.

4. I drove to Texas for the holidays. On the return trip I smelled burning oil. I checked under the car, checked engine compartment but couldn’t find any leaks.

5. The day after my trip my low oil light came on. I called the dealer and was told “Don’t drive it, we are going to tow it back.” I called Subaru roadside and they towed the car from my house.

6. The car sat at the dealer for a week. I would get a call every few days “Hey, we haven’t looked at it yet but it’s in line.”

7. The dealership asked me to let them drive it for 50 miles. I said “No problem.” After another four or five days they said “We can’t recreate the problem.” I asked how much oil they had to add to my car and they said “TWO QUARTS.” My car had burned two quarts of oil in the first 4000 miles. This should have been an immediate “Okay,we’ll swap the car,” but it wasn’t. Subaru has had HUGE issues with oil burning in the past, but I was under the assumption these issues were over, but what I’ve learned now is that oil burning issues are still very much part of the present. Look no further than my car.

8. So I drove the first 4000 miles with an engine that wasn’t running right. What did this do to the life expectancy of my car?

9. They want me to drive it another 1200 miles for another test.(Why we need another test after two quarts is beyond me.) My schedule called for me to drive to New Mexico, which is 1600 miles minimum but I told them there was no way I was driving that car to New Mexico in the winter. So now I have to change my plans and work schedule because my brand new car isn’t right. (Oddly enough NM was where I was most excited to explore in the new Subaru.)

10. I forgot to mention the throttle sticking. Again intermittent. Sometimes on startup and sometimes when I’m downshifting and push in the clutch, let off the gas, the throttle spikes to 3000 RPMS’s instead of dropping. When you put the car back in gear and let out the clutch the car takes off. Oddly enough, this might be the most dangerous issue but is the least of my worries at this point.(They admitted it was too high on cold start, at least at times.)

11. I had plans to modify the car. I already installed a trailer hitch and my racks, but I was also aiming at seat covers, wheels, tires, skid plates, etc. I cancelled all orders. This is a total bummer because I was drooling over the Sparco Terra wheels and General Grabber AT tires.

At this point I think I’m on my own and in an “oil burning protocol” with a brand new car. Now I have two quarts of oil rattling around in my brand new, 2017 Forester, and each time I get gas I’ll be checking that dipstick. I haven’t had to do this since…….EVER. My last two Toyotas never burned a drop of oil, neither did my VW. My neighbor’s two-year-old Forester…doesn’t burn oil either. Oh ya, my mom’s Crosstrek……doesn’t burn oil either. Now I’m putting my personal and professional life on hold, for 1200 miles, so I can finish a protocol that ends in either miraculous recovery or total engine replacement.

PS: To be fair. As I’ve mentioned before, there are many things about the Subaru I love. Visibility, bad weather driving capability and it’s economical. I’m not an 8000 mile, lease driver who lives in the city. I’m a 20,000 mile a year person who lives in two places and spends copious time in the backcountry. I need a car I can trust, and so far this Forester clearly isn’t it.