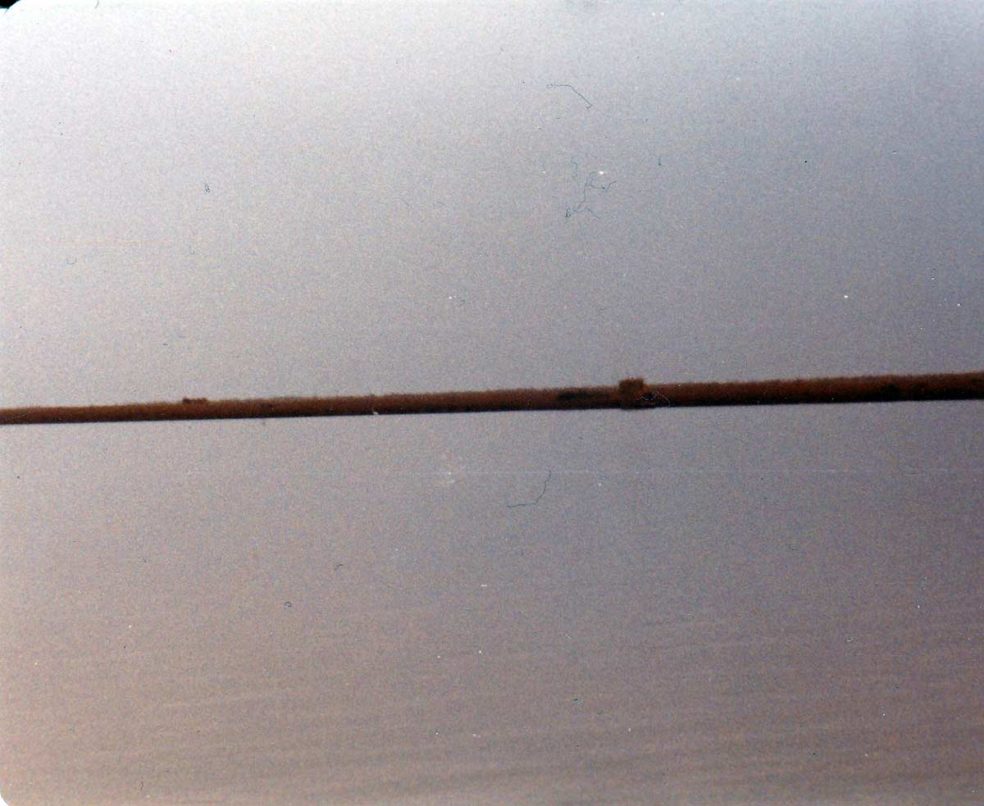 I’ve come to an important conclusion. This is the single worst photograph ever made. This image was made from an airboat on the Texas coast during a duck hunting expedition my father and I undertook in the early 1980s. This horrific “capture” was made with a Kodak Disc Camera.

My father didn’t like photography or photographers for that matter and really didn’t have much patience for the arts in general. Were he alive today he would be voting Republican and would be totally in favor of cutting back any funding related to the arts. The only thing I ever witnessed him photograph were hunting and fishing expeditions and each year he would make a single photograph during our Christmas celebrations. For him, a typical roll of 35mm film would only include about eight frames total three of which would be from separate Christmas “shoots.” Seriously, one frame a year. The rest of the frames would most typically be accidents. He would then run out of patience and get the film processed at the one-hour lab down the road.

Here is the takeaway. Something triggered this photograph. He and I were in the same airboat traveling at high-speed across the shallow bay but I never thought of making this picture. For some reason, something in this landscape forced him to make a mental and physical decision. He then had to take off his gloves, dig into his jacket pocket and retrieve the camera. He then had to frame this thing while traveling at high speed in high wind. Something in this tragically mundane scene passed through his retina, passed into his cerebral cortex which in turn triggered his muscular system to act. This scene. The one in the image above. Think about that.

This is why finding yourself as a photographer is so important. My father had no intention of ever showing this to anyone other than me. Today, I get the feeling that many working photographers are ONLY shooting for the audience. If you do this, and only this, you will never actually find yourself. And it is a guarantee you will never make original work. It is quite possible that one of you will look at this image and say “It’s not THAT bad,” or “I’ve made worse.” Again, that is my point.

This image might suck beyond belief but this image is HIS image. This is one of the rare moments in life when I’m going to encourage you to be greedy. I’m going to encourage you to make the worst photographs you have ever made as long as they truly belong to you. A friend just sent a link to a recent photo essay that is getting buzz. We both looked at the work and said: “Yep, it looks like work that this magazine runs, every single one of their features looks the same.” Photographers, especially self-taught photographers, just cruise what is getting published and they copy what they see. The checklist of color, lit, medium distance, posed and produced all ingredients that shorten the amount of time required to make the actual work.

After dad died I went through his truck attempting to clean out his belongings. In the center console, I found a plastic Russian camera. My first thought was “Ah, the old man was working for the Ruskies.” But I then pieced together that it had been a giveaway of some sort. In the camera was a roll of film. About eight frames. I processed it but the time and temperatures were too much. Nothing but grain. I’ve often wondered what the Hell he was doing with this thing and what prompted those eight frames. I’ll never know.