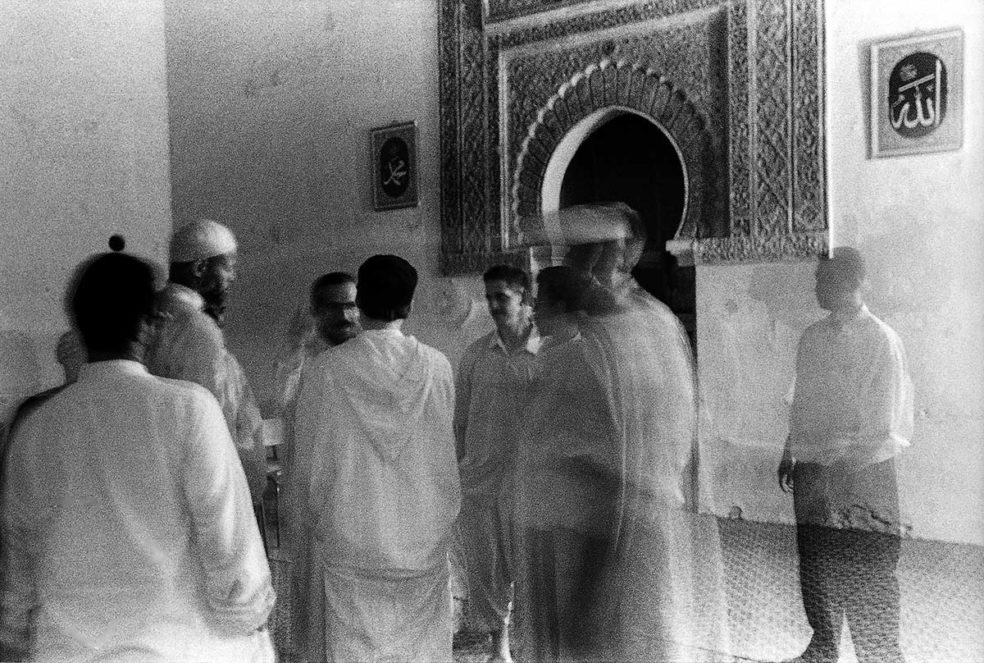 “How would you like to go to a place you would never be allowed to go on your own?” he asked. “Yes, of I would like to go,” I answered. “But I’m with three other people.” “None of us are Muslim and two of us are women,” I added. “No matter,” he said. “Follow me.”

We turned back toward the medina and began walking single file behind him. Leica with 50mm around my neck, second body safely in my belt pack. “How is this going to work?” I wondered as we moved deeper and deeper into the labyrinth that is Fez.

I’d known “him” for several years now. Our relationship off to a rocky start after he asked me not to photograph him. “No problem,” I stated then accidentally did precisely what I told him I would not. There were words exchanged, mostly his, but I deserved his wrath, at the time. A year passed and we encounter each other again. This time he was intrigued more than anything else. “You are still at this particular story?” he asked raising eyebrow. “Yes, I have a hundred reasons to quit but I just can’t,” I answered. “Ah, maybe you are a secret Muslim,” he said snickering. Something unspoken transpired. A bridge crossed. A trust founded by perseverance. And now, looking up as I exit the medina, seeing him standing motionless, staring back at me. “I’ve been thinking about you,” he said.

Deeper, darker alleyways. Long gone are the sights and sounds of tourism. Surrounded by one of the oldest places I’ve ever been. A musky earthiness, damp and coated in a fine layer of smoke and ash.

The mosque was rumored to be one of the oldest on Earth. The latticework of construction unlike anything I’d ever seen. “The camera is going to be a problem,” I said to him. “No, it won’t,” he said. “You are free to work.” “And so are your friends.”

Shoes off, silence. Small rooms lit by single bulbs. Men and boys. And then the songs began. Scriptures, passed down generation after generation. Nothing written. Just the text and cadence of song. I am the piece that does not belong but the camera and my curiosity are my permission. I work silently. 50mm, 35mm. Bouncing in then out.

Photography in this place is about boundaries and knowing precisely how close you are to the electric fence of the ethical dilemma. I am never in the right because I am taking, so what I’m given must be given freely and without the notion of reward or it is tarnished. Once tarnished it is dead.

Weak light. Dim. Wide open at f/2, handheld at a quarter of a second. Breathe. Elbows in, braced. There is for a single frame. That’s all. If I’m pure of thought, pure of mind and photographically fit I will walk from this place with more than memories. And if not I will suffer a pain specific to my curse.

“It was good to see you,” he said. “And you as well,” I answered. Outside now, alone and deep inside the medina. Light splintered down through religion, thought, history and earthen dreams of empires. His form, in white, turns a corner and disappears.