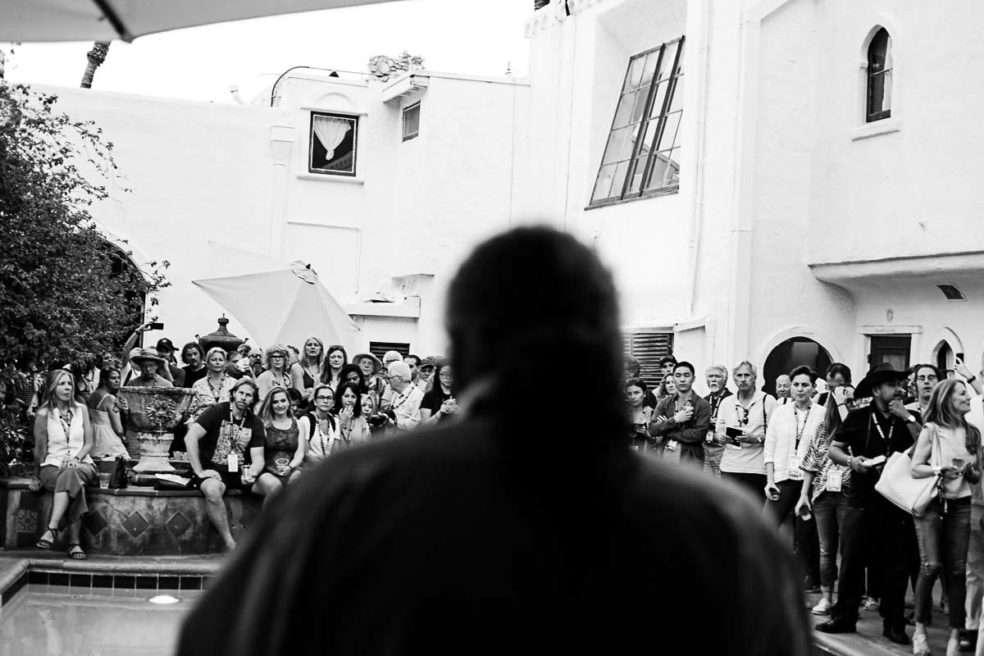 Every May I land in Palm Springs for the festival and sometime late on Sunday I see Jeff Dunas, the human behind the machine. I look at Jeff and each year I wonder the exact same thing. “How does he do this?” “Why does he do this?” Around the pool at Korakia stand hundreds of people from around the world including a list of faculty that reads like the who’s who of the last sixty years of premiere photography. What genre? All of them.

The “how” of the festival must certainly be an eight to nine-month planning and scheduling affair, and for this Jeff deploys a full staff. They are everywhere. In the hotels, on the streets, driving shuttles, transporting classes to the remote peaks and deserts and also manning every air-conditioned inside post like classrooms, seminars and portfolio reviews.

The “why” question of the festival is more difficult to define. Jeff is odd. Not in an “I collect spores, molds and fungus,” kind of odd. Just odd in the sense that he has a very particular background in photography, publishing, printing and connecting people. He is capable of doing things that others aren’t. And he’s got the respect of the widest range of photographer I’ve ever seen. Certainly, it would be easier to learn Mandarin or find enlightenment or explore chaos math than produce this festival but for some still unknown reason, he continues. This is year…..thirteen? I think.

You know me, people. I’m not that social. I like the quiet. I like being alone. And yet last night I probably spoke to at least a hundred people I know really well and another fifty I was meeting for the first time. For anyone who spent part of their life in the photography industry this is ____________(Enter preferred holiday celebration here.) in May.

In the course of one hour last night I got to talk and eat with five of the most incredible photographers walking the Earth. I knew four of the five, and the fifth was a tough sell but I broke him down with enough questions to stun Alex Trebek and then it was off the conversational races. If you are nice I’ll tell you who they were. You will be jealous, or if you are an Instagram photographer you will have to look them up. (On Saturday I told an IG photographer I was going to the festival and also listed some of the faculty and he had never heard of any of this nonsense or any of these people for that matter. This should not surprise me at this point but it still does.)

My goal here is simple. Collect, listen, take notes, get feedback, learn what’s new and co-teach a two-day bookmaking class. I will be posting daily if possible. Also, I did run into the Fuji guys. There were words exchanged, questions asked. Even a potential plan in place, but for what will remain secret for now. It’s probably a long shot.