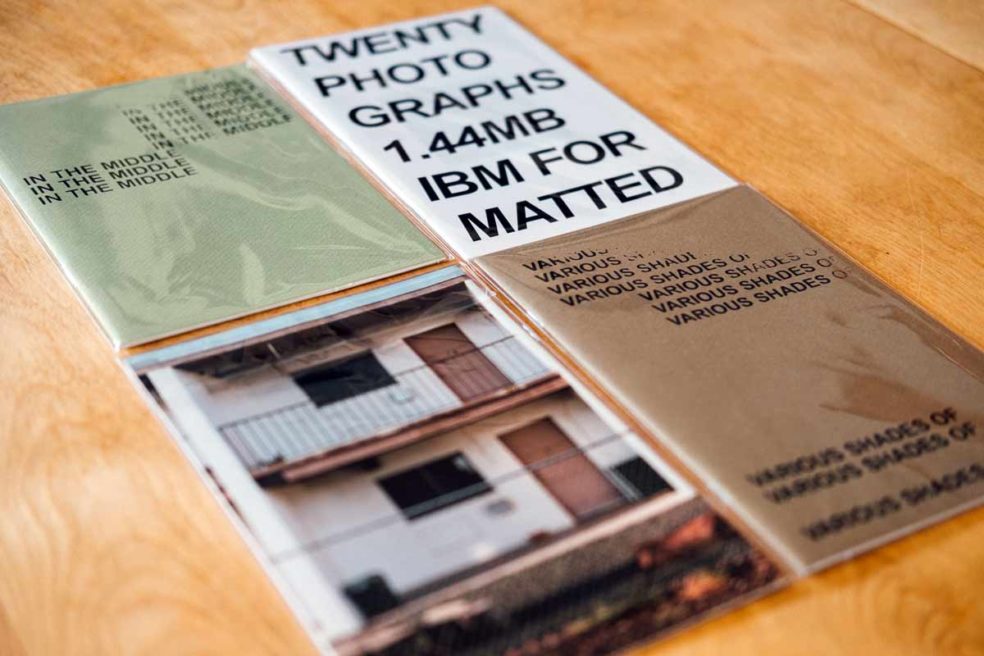 Yes, yes, yes, I’ve written about Nate Matos many times, but he’s the only Nate I know so I’m going to keep going until he is dead. And, he’s really, really good. He keeps MAKING THINGS. This new series is classic Matos. Cool, simple, clean and cohesive. The reflections of a compulsive collector of images. Nate seemingly just dreams things up and then goes and does them. No pretense. No massive ego. No need to wave flags of following. He just does it. Ahhhh, so refreshing. Here is a dose of reality and explanation from Nate. An Arizona Motel:
Littered throughout the American Southwest live housing that has seen a unique form of gentrification. Towns that once offered state routes as a main street, letting passers by choose to stop for the night have been bypassed with freeways just outside of town. Left alone, motels have been repurposed to tourist attractions, abandoned, or used for storage.
‘An Airzona Motel’ is a short photo essay of one of these structures. Sitting behind a simple fence has rooms filled not with people, but instead paint cans and hardware of all types. Color Theory:
Each cover in the ‘Color Theory’ series is screen printed, leading to variations in ink and consistency a direct correlation with the varied familiarity found within. This first print run is only 15 copies of each publication. This is a project I’ve been working on for some time, and I feel is the next iteration of my earlier exploration into the repetitive and monotonous themes I first established in my 2016 series ‘Blandscapes’. Similarly, after the first printing it is an open release with no established end date or limit to quantity of publications. I do know there is a third and potentially fourth release planned beyond these first two. Various Shades of:
The first release in my ‘Color Theory’ series of publications; ‘Various Shades of [brown]’ is an exploration of the warmth of brown hues found within the man-made landscapes of California and the American Southwest. In the Middle:
The second release in my ‘Color Theory’ series, ‘[green] In the Middle’ looks at the contrasting environments of trees and other plants living within urban environments. 20 Images 1.44mb IBM Formatted:
A series I first presented on at the (now closed) Newspace Center for Photography in Portland, Oregon. This limited publication is part of a mixed medium interactive photographic exhibit.

For this project, I created a taxonomy allowing me to categorize a collection of nearly 1,000 photographs. Each image divided into primary and secondary annotations and stored on an individual floppy disk. As the disks are labeled with the contents, they are then re-photographed for the collection shown in this publication. The series of images published are all that is presented to the viewer unless they are able to see the series in person. Doing so allows them to interact with the disks, selecting images they want to see, and loading them into the viewing cart. This series was built as a way to bring the viewer into the photographic process. By forcing them to touch and imprint their personal choices into the images they see, the photographs are no longer disposable images flashing before them online but a part of them.

You can see my prototype display in the video here:

If I had to describe the category of photographer that Nate belongs to I would say “outsider.” I say this with fondness not as a barb. What I find interesting today is that vast majority of work I see, great work, is being done NOT by industry people who are locked in to the way things “have to be done,” but “outsiders” who just do what it is they want to do. I’m even seeing people who used to be entrenched in the idea of what the photo-industry was 20-years-ago who now realize that world is gone and they are branching out. Opening up photo cafes, becoming lens based artists instead of straight photographers or joining NGO’s as staff and NOT as contract photographers. I’ve never spoken to Nate about this, so he might entirely disagree, but he’s not here right now and it’s my site. So there.

If you don’t read his site you should start, and while you are at take a look at his store.