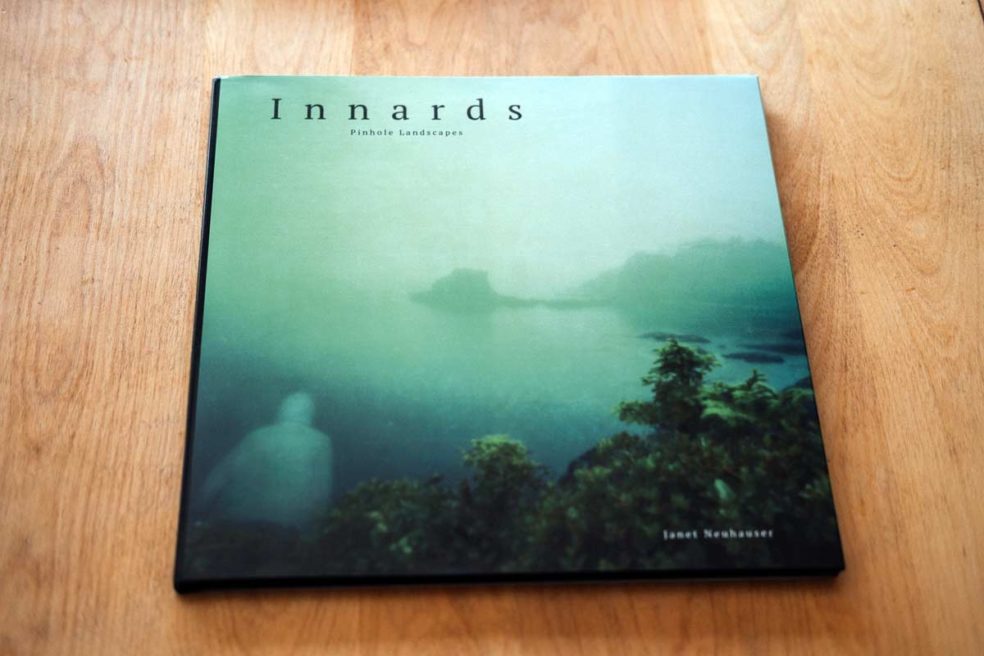 This is not a post about Janet Neuhauser’s photography. That I will leave to you to research and understand, but just know she is a committed pinhole photographer and someone who has been at the photographic trade for many years.

I met Janet last year during a workshop in Seattle. Anyone who can endure my talking for two days deserves some kind of medal. Nobel, Gold, whatever. All worthyIn fairness I was teaching with Michelle Dunn Marsh who brings a lot to the table.) I’m writing this post because of what happened AFTER the workshop. I’m writing about this because I think Janet’s technique in regard to bookmaking is something we can all learn from, and I also believe it’s an intelligent method when it comes to Blurb.

The book you are looking at is a TEST book. Yes, you read that correctly. A test book. By this time, I’m guessing Janet is on her second, third or fourth test book. But let me back up a second. Janet took a workshop. Step one. She wanted to know a bit more about the publishing process. During the workshop she refined her idea, her body of work and her ideals in regard to the book. Step two.

She then reached out to me for advice. Step three. I gave her small ideas, suggestions, etc. but little more than minor hints about making test books, saving money here or there, materials options, etc. She then made her first test book. Step four.

Then came refinement. Step five. Although I could sense her desire to nail the book there was no panic, no crazy demands, no massive amounts of stress which could have reduced the effort to something not worth doing. Her refinements came in the form of font choice, text style, paragraph size, page numbers, the density of typography, paper choices, cover font etc. These are all the things we need to refine, and by doing tests and being okay with admitting you might not have made the right choice the first time Janet worked her way to the promised land.

Far too often I see photographers in particular place incredible demands on themselves, demands for perfection, often on their first attempt. This is not only unrealistic but it also takes the fun out of the entire bookmaking process. Just chill my camera loving friends.

I want you to look at some of the details because you might see something you like or even something you don’t like. That is entirely okay too. Just wanted to say “thank you” to Janet for sending me an early version of the book. Congratulations Janet. Onward.