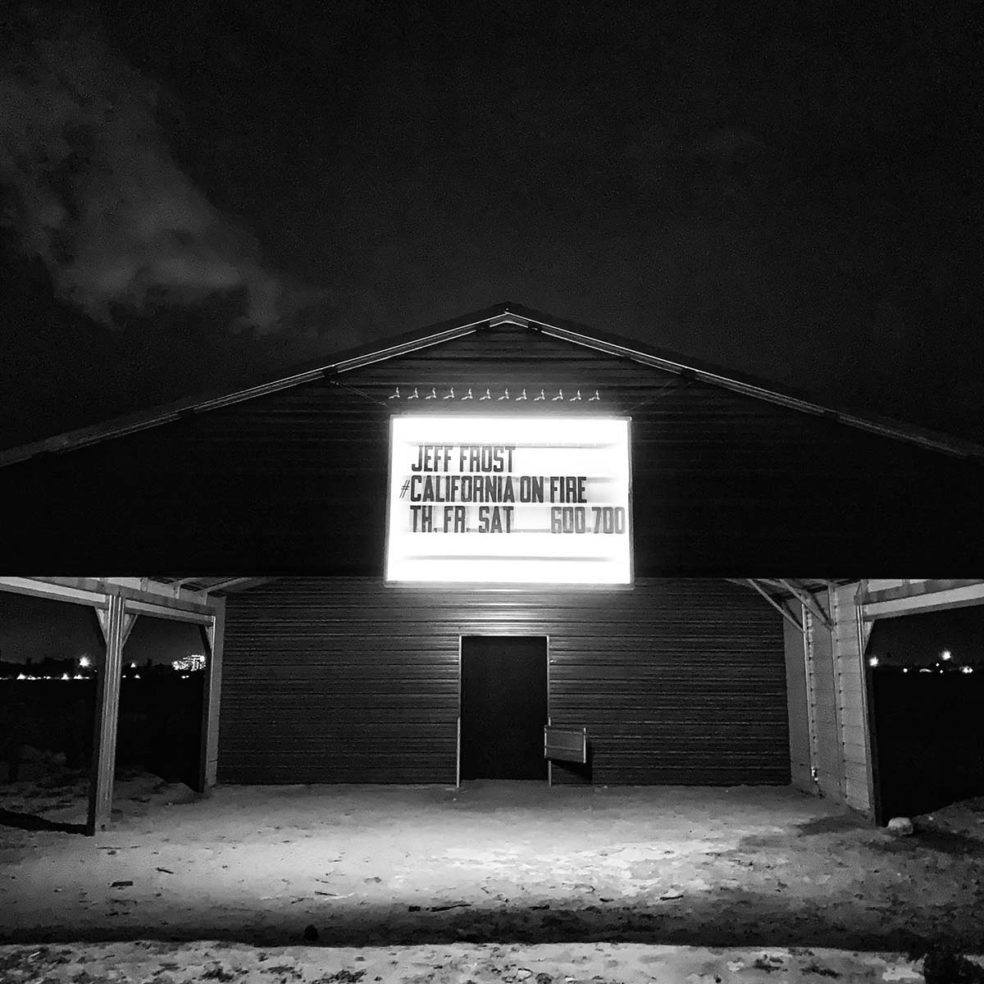 What do you get when you combine five-years of intensive fire coverage, an abandoned camel barn, a custom built screen and a pulsing sound system? You get a unique, cinematic experience, and you get twenty-five minutes of “Holy Shit,” filmmaking.

Much of Jeff’s work is tied to the desert. He found what I believe is an old barn used to house camels and turned it into a small cinema with a very large screen. Wooden benches to place to our asses, a pumping sound system and a fine layer of dust coating our bodies and our things. And then it began.

No script. No dialogue. Just one chapter after another of the fires unfolding across our state. Now, why does this film work? Thanks for asking human masses. It works because each viewer can interpret the film in a myriad of ways. What I see, what I interpret could be entirely different from you. The film stands as an art piece, a sound piece, a warning or even a celebration of sorts when it comes to the men and women putting it on the line to battle the angry elements.

One thing you need to understand is the amount of work it takes to pull something like this off. Frankly, most “artists” couldn’t do it or simply wouldn’t do it. If you JUST take the principle photography alone it’s very obvious that most photographers would never commit to this level. Not even closeThe scouting alone would be overwhelming.) Then throw in the fact he’s using so many different rigs, motion, still, audio, etc. I have trouble loading a roll of film these days, so the idea of leaving my life behind and driving in a full-on fire zone isn’t really in my realm of comprehension. Luckily, Jeff doesn’t seem to mind doing this exact thing. Over and over, year after year. And then you have to cut it, and cut it again and again and again. And then you have to find a way to deliver it. I was especially impressed by his ability to go from intimate up close, handheld segments to long range, compressed, tilt-shift scenes made miles from the actual fire.

The fires are a wildly fascinating topic. They too, like many things in our world, have become politicized. This never helps. Fire is tied to human DNA, but the world we have invented for ourselves, a strange one at best, doesn’t play well with the elements. The film points you in multiple directions but it’s up to you to draw the conclusions. It’s also up to you to take the time to understand what these fires mean, how they are changing and how we need to be far more intelligent when it comes to the spinning rock we all live on. (Or the flat pizza like object for those of you not into spherical things.)

If you live in California my advice is to go see a screening of this film. Go see it where we saw it. And for those of you living elsewhere, wait and hope it gets released in wider distribution.