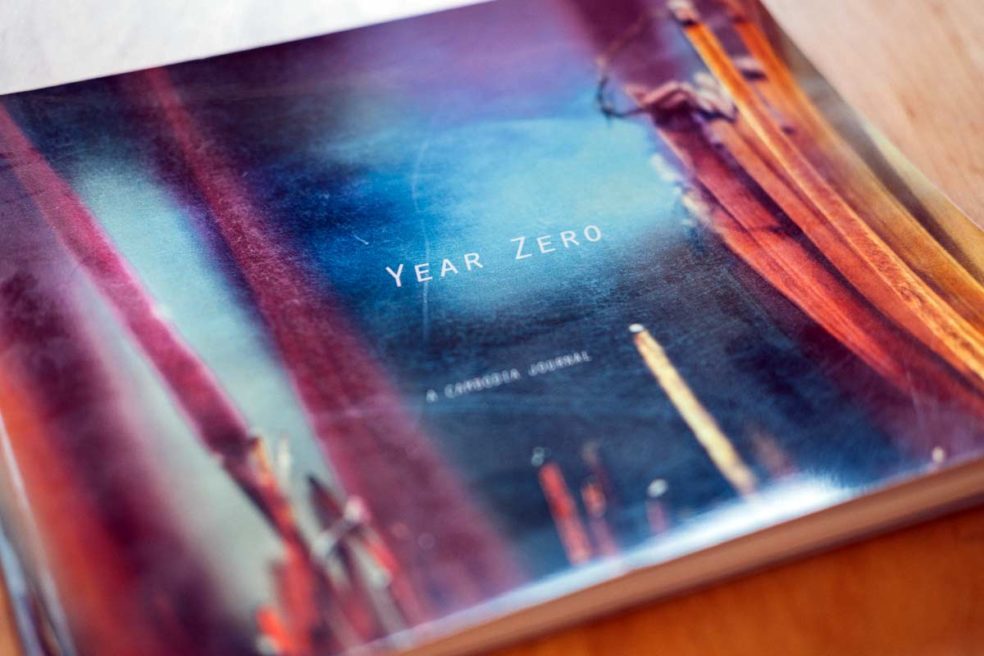 I recently had the need to downsize, to thin out, eliminate and make those tough decisions. Does it stay or does it go? As you can imagine, I’ve got a stockpile of books that could keep an oil drum burning for months on end. I’ve collected hundreds of books from others, which I’ll keep, and I’ve also made hundreds of my own, many of which I’ve decided to part with. I recycle, I shred, depending on contents.

One book I stumbled upon drew me back to a distant time of intensive photography partnered with unbridled yet misguided bookmaking passion. Cambodia was one of my earliest trips as a photographer. 1996. Parts of the country were still no go zones, the hotel lobby had a guy with an AK as the concierge and most of the nights were peppered with gunfire. My first night in country was the last day of the River Festival where a million Cambodians line the riverbank in Phnom Penh. Someone threw a grenade in the crowd and it was off to races. Running blindly through the unlit streets not knowing where I was or where to find a place to ride out whatever was coming. Oddly enough, nobody was killed but the event set a subliminal tone for the entire trip which saw me drifting in and out safe areas as as places that required diligence and security.

Two weeks before my trip I met a stranger in a cafe in Laguna Beach. There were no empty tables so I offered him a chair at mine. “I spend most of my time in Cambodia,” he said. “I’ve always wanted to go,” I replied. “I need a photographer,” he answered. Two weeks later he greeted me at the airport in Phnom Penh. Flying in I was amazed at the density of green. The plane was nearly empty and the crew eyed me with mild curiosity. In the seat back in front of me was a copy of “Soldier of Fortune.” The cover story was “Nuns under fire in Cambodia.” I didn’t read any further.

At the time I was a Canon EOS 1 and zoom photographer mostly. Two bodies, two lenses, 20-35mm f/2.8 the 70-200mm f/2.8, but I also brought along my Leica M4-P and 28mm, which would ultimately change my photographic life. I had a duty, an assignment people. It was that easy at the time. He had a need, I had a 35mm solution and Goddamnit if money wasn’t exchanged. My buddy was opening a law school, of which there were exactly ZERO in the entire country. I covered the bases for him, but we also began to stretch our legs.

We ventured north, south, east and a short distance west. There were high speed drives through no land where the driver would say “Stay low in the backseat, I’m going as fast as possible and I’m not stopping for anything or anyone.” This might sound scary or brave but let me assure you it was neither. I didn’t care about anything other than making pictures. It was my lifeblood. Anticipate, prepare, wait, wait, wait, pounce. There was no preview, no laptop, no internet, nothing. It was f^%$%$#l beautiful.

All I had to do was plan and shoot, react and shoot. Then came the KNOWING of what I had or didn’t have. Anyone who lived through the film era knows how powerful this drug is. It was everything. Knowing but not being positive until the glow from the lightbox punched up through the layers of dye and into your retina. You did it motherf$%$#@#. Or, you missed and lived with the knot in your stomach and the desire to erase all memory of what you let slip by.

Cambodia was a deck of unpredictable cards and it was hot. Hotter than anywhere I had ever been. I was soaked in sweat from the time I emerged from the shower to the time I fell exhausted into bed, often times buzzing from too many beers at The Foreign Correspondence Club where I got to hang with a strange assortment of odd ducks. Tiger Beer and Al. Yep, that Al. It was heavy, and short run to my hotel. And I mean run.

The Leica began to emerge as my tool of choice. It so fit my idea of what an image should be. Small, light, nearly bombproof, literally. Quiet. Unobtrusive. Simple. No battery. Just a metal box that got out of my way and allowed me to focus on the ingredients I knew I needed. The Leica was and is a primitive tool but when you need a hammer or a long-blade saw there isn’t much else that’s ever been better. I began to leave the Canon in the room as I moved into the world as a rangefinder guy. A single snap here. A single snap there.

Returning home to the sterility and blandness of Laguna was cruel. All I could think about was going back to Asia, but there was a new wife, a job and the rest is a self-inflicted wound of should of, could of.

I made my edit and began to build a book. I was clueless and in a rush. A deadly combination as evidenced by these pages. The title, “Year Zero,” a good one perhaps. But the font choice, size and placement, not even close. The type treatment, too large, too wide and too unrelated to the work at hand. Typos, poor structure, no soul. A mess. An all around mess. The images, okay, there was something to work with.

I shopped it around, the work that is. One photo editor, a young woman based in Los Angeles, didn’t know what Cambodia was, or where it was, and asked why anyone would have any interest in such a place. Just for kicks I asked her about Vietnam and drew a complete and total blank. She then admitted she was an executive assistant but when the photo editor quit they gave her the job. And she admitted she only hired the good looking photographers who had accents. I knew my days in photography were nearing an end. (I should have quit back then but endured another twenty-years.) To her credit, it was a travel magazine, not a news magazine, and nobody else in their executive offices seemed to know anything about Cambodia either. (Like the UN spending more money on the 1992 Cambodia mission and all previous missions combined.) These facts don’t sell ads.

This book no longer exists but I hope this post helps some of you make better decisions than I did. Think, study, practice, double check, make test books, learn, learn and keep learning. Books are complicated. They demand our best if we believe the book will live beyond our ego and insecurity. You simply cannot make anyone care now, and a is only a reality for less than one percent of the human population, and even that one percent is elitist to some degree, but this is OKAY because those of you who see the world through small rectangles or squares know there is no pill to kill the craving. Books have been with us for a long, long while and will continue to be regardless of what we hear about their demise. Encapsulation is perhaps more important today than ever before. Add curation and the stakes get even higher. We can’t be all knowing, all seeing or all understanding without help. These pages, tightly edited and delivered properly, will serve as our guide.