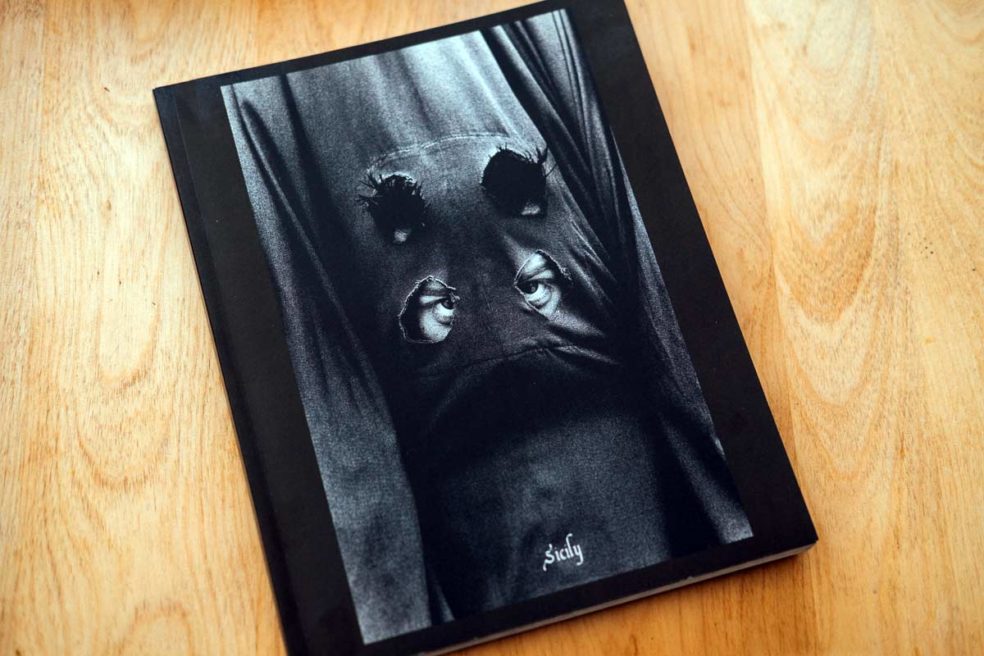 I’m in the midst of packing up a ton of books. Consequently, I’ve found a myriad of my past sins, including this baby. A version of my Sicily book that should have never seen the light of day. Thankfully I printed just one, realized my mistakes and moved on. This, my people, is called bookmaking.

I’ve spoken about the photographic aversion to making test books, but if you give your trust to Uncle Dan I will promise you the benefits of making test books will far outweigh the angst you will feel when attempting to make something “perfect” without putting in the required experimentation.

Okay, the good. I started with a solid body of work. This project took four trips to Sicily over a five-year period. So there’s that. This was heaven on Earth from the photographer perspective. I would board a plane in Los Angeles and approximately ninety-six hours later I would stagger out of the terminal in Palermo a sweaty, filthy, stinking mess ing flown through Frankfurt, Rome, Geneva, New York, Chicago, Milan, Paris or various other lesser known garden spots on my way to the small island of Sicily. No mobile phone. No laptop. No connection to ANYTHING back at home for three solid weeks.

This entire project was completed with two, small Leica rangefinders and one medium size bag of held securely in my XRAY bag, a device that both saved my film but also caused several near fist fights in airports none keen to provide my desired hand check. Switzerland, in particular, was filled with douchy anti-American sods who universally denied by right to have my film hand inspected all the while telling me I was almost assuredly a terrorist of some sort. I digress. (Did I mention my mom’s family is Swiss?)

I like my combination of ingredients in this book, at least to a certain degree. First, I used softcover which saved me a massive amount of on the book itself. So by saving on the cover material, I was able to spend more on my favorite high-end paper, Proline Uncoated. (This was another mistake actually, but hang in there.)

Now, photographically, I’m one of those strange creatures who does shoot a fair number of vertical images. In fact, a REALLY famous war photographer once looked at this body of work and the ONE thing he said was “Wow, you shoot a lot of verticals.” Tool.

Anyway, I chose the portrait format 8×10 book simply because I prefer that format to the standard landscape. Nothing wrong with either format. So, running the verticals was . Boom. Full page with border. I kept the border the same on the horizontals BUT I ran them , across the gutter, like I’d done a hundred times before.

And this is where things went off the rails. The softcover book with thick paper and high page count equals a book that does not open very far or very well. Think Layflat, then forget about Layflat and realize you got the opposite. Not good for viewing full horizontals across the gutter.

Two more glaring errors. First, the cover sucks. It’s just bad and boring and might even make a goat sick. Lack of originality. Lack of design. Lack of typography knowledge and execution. Reminds me of a bad spring break decision ending in a long and lonely jail sentence.

I also used the wrong paper. Sure, it’s my favorite paper, but it sure is the wrong paper for this particular book. I need something with more contrast and a deeper black. Now, the Proline Uncoated DOES have a super solid black for an uncoated stock but it’s not what I was after. I should have used the Pearl version instead. (I was 100% sure Uncoated was the right choice when I hit print.)

Finally, there is no story here. Yes, the images tell a solid visual story, but there just isn’t copy to inform and help the reader along. Nor is there any copy breaking up the nonstop imagery. You might think this could be a good portfolio instead of a book but it really doesn’t work for that purpose either. Yes, I managed to make a book with absolutely no purpose. Your welcome.

This book screams “rush job.” And yes, the work had received a bit of press, so I was excited about the potential but my excitement clearly outweighed my bookmaking ability. Probably still does, but that is another story.