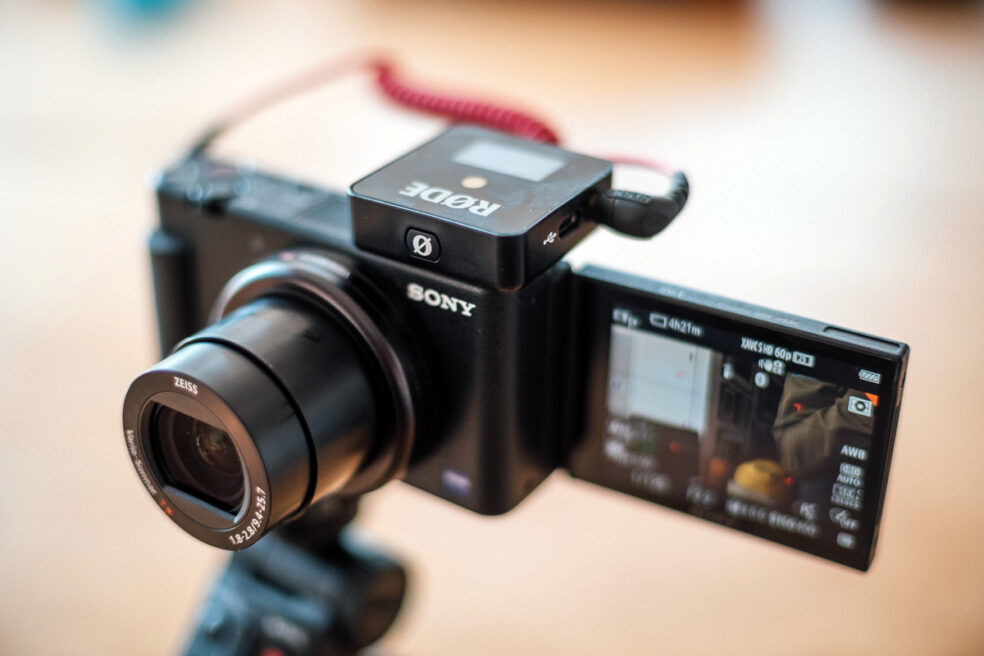 Hey, you know when I said I would never do a gear review? I lied. Hahahahahahaha. NOT FUNNY. This is going to be short and sweet. Want to know about the menus? Call Sony. Want to know if this camera works and how I use it? Read on my motion capture friends, read on.

The Sony ZV1 is often referred to as a “vlogging camera.” Good thing because that is how I’m using it. This camera is TINY, affordable and very, very simple to use. And it’s capable. In fact, it is capable of far more than I am.(4k) The camera fits in the palm of my hand. Full disclosure, sometimes I just put it in my hand and stare at it. Don’t judge me.

The camera comes with a small, dead cat wind screen which fits right into the hot shoe. Nice move Sony. Now, the built in mic is okay but most vloggers are using an external shotgun mic. I, on the other hand, love using my Rode Wireless Go mics in partner with the Sony. It works, it just works. So simple even a 51-year-old child can use it.

The camera came with a “vlogging kit” which includes a super cool and usable Bluetooth grip that doubles as a mini-tripod. I have used this grip every single time I’ve used the camera. The grip allows me to make a still image, start and stop my recording, zoom in and out and also has a C1 custom function button as a shortcut to my most used menu items.

Okay, okay, okay, the menus. Sony has a troubling reputation when it comes to menus, which to some degree I understand coming from using Fuji for the past five years. Fuji menus are the best I’ve seen. And the easiest to use. However, the Sony menus, at least on the ZV1, are very simple and straightforward. In fact, I setup a C1 set of most used items and since that time I have never ventured back into the menus, at all.

Why did I want this camera? Small, affordable and stabilized. I needed something to round out motion coverage, something stabilized, that allows me to move and shoot. Now, this is not a GoPro. GoPro stabilization is off the charts good but the angle of view and the quality are often lacking, at least for me. The Sony fits in with the myriad of other things I am required to carry and the stabilization works well.

I often find myself using the Sony for both on camera vlogging as well as for short clips that in the past I would have had to use a tripod and XT2 to acquire. The entire rig is small enough it goes with me everywhere and fits inside any and all of the bags I carry.

I have three batteries but have never even used a full battery. The eye focus tracking works like a charm even with sunglasses and the image quality at 1080 is more than adequate and the one time I shot 4k I could not believe how good the footage looked. Of course my computer crashed and I had to burn candles and chant to bring it back. I promise to never shoot 4k again.

If you are looking for a small motion cam then make sure you take a look at this baby. If you want a real review then by all means search for a real filmmaker. You know, someone who will do one of those maddening “Twenty-nine reasons to use the Sony ZV1 and nine reasons not to,” films. I’d rather eat a lightbulb.

And finally, if you want to see footage than just check out my YouTube Channel where everything I make is now utilizing this camera. Now, time to prep for the next unboxing video…………………………………..