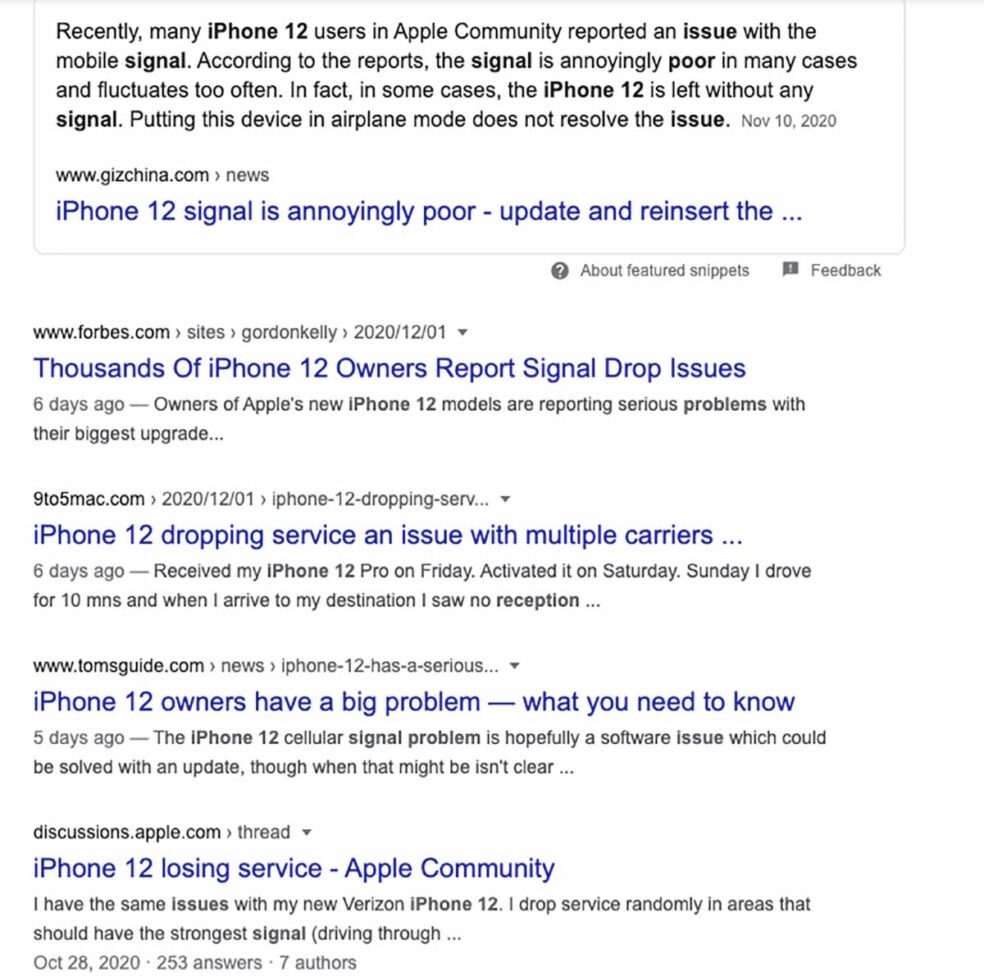 I cover this in my upcoming podcast but if you are considering upgrading to the iPhone 12 I would seriously consider waiting. I lease my phones and when I got the email I was eligible for the upgrade to iPhone 12 I did so, as I have with the prior generation. Big mistake.

From my experience, this phone has two major issues, and when I say major I mean things that make the phone nearly unusable. Battery and mobile signal reception. When I opened the box from Apple I noticed the new form factor and design and said “Oh no.” The phone looks and feels like a larger version of the iPhone 5, a phone I loved, but a phone that suffered from two major flaws. Battery and reception.

I bought my iPhone 5 in Sydney and took it back a few days later asking for a replacement due to a faulty battery. The salesperson at Apple said, “No, all the batteries are that bad.” The phone also had horrible reception. So when the iPhone 12 arrived and it looked like the five I was concerned.

My day today. Same cell carrier, same cell package, same locations. No signal. Or diminished signal that makes the phone unusable. Phone calls, Zoom calls, Internet. Barely doable. And at times impossible. My wife has an iPhone 7 with my exact same plan and she is fine. Standing next to me the difference in reception is night and day. This morning I was on a Zoom call with our entire company attempting to warn them about the phone and unbeknownst to me, they couldn’t hear me. This turned out to be the joke of the day. “Case in point,” someone said as everyone laughed. “I’m only hearing every third word.”

I spent an hour on the phone with Apple today but nothing we did had any effect on the situation. I told them I didn’t care about the battery issue. The real issue was the lack of signal. Apple of course said “We have never heard of this issue,” which is what they always say dating back to my iMac G5 (faulty power supply), Macbook (faulty hard drive), and my PowerMac G5 (inherent bug they admitted was there but were unable to fix.) Anyone out there with a butterfly keyboard? Ya, you get my drift.

This post is just a warning to wait. When I express concern about Apple, more than any other brand by far, I’m usually met with skepticism, rage, accusation, and denial and today was no exception. I got “My phone is fine.” “It must be you, Milnor.” “I’ve never heard of this.” On and on and on and on. By the attached image you can see it’s not just me. I don’t hate Apple. But I have to be real about their products especially when I’m spending money on devices so flawed they keep me from doing my job.

Again, Apple apologists, I’m just saying “wait.” That’s all. This is not, I repeat NOT an attack on the brand. Settle down. Call me picky but I’d really love a signal with my phone. I know, a lot to ask. Software patch? Replacement phone? Great, I’m all ears.

MORNING UPDATE: Okay, quick update. Again, NOT hating on Apple here. Just passing this along in case it helps. Good news, I was able to use my phone as a phone. My sister called as I sat at the breakfast table and my first thought was “I have to go outside and uphill to get this to work.” I was wrong. However, here is the odd part. 5G, gone. LTE, gone. 4G…….yep. Back to a 4G signal with three bars. This is a first. Have not seen this at my house in a year. This is the good news. The bad news, the phone no longer works as a hotspot with 4G and the phone is my ONLY internet. So I am now in the van in Santa Fe as I am no longer able to work from home with this phone. Take this for what it is, but it is very clear to me this phone does not work like the last gen and has taken a step back in regard to the signal. If you live in the city, probably not a big deal. If you work from home and use the phone for your job then this is a major problem. Also, yesterday Apple recalled the iPhone 11. Not all of them but a lot from what I find. But, the 11 was better. Keep it and wait out the wrinkles in the new phone.