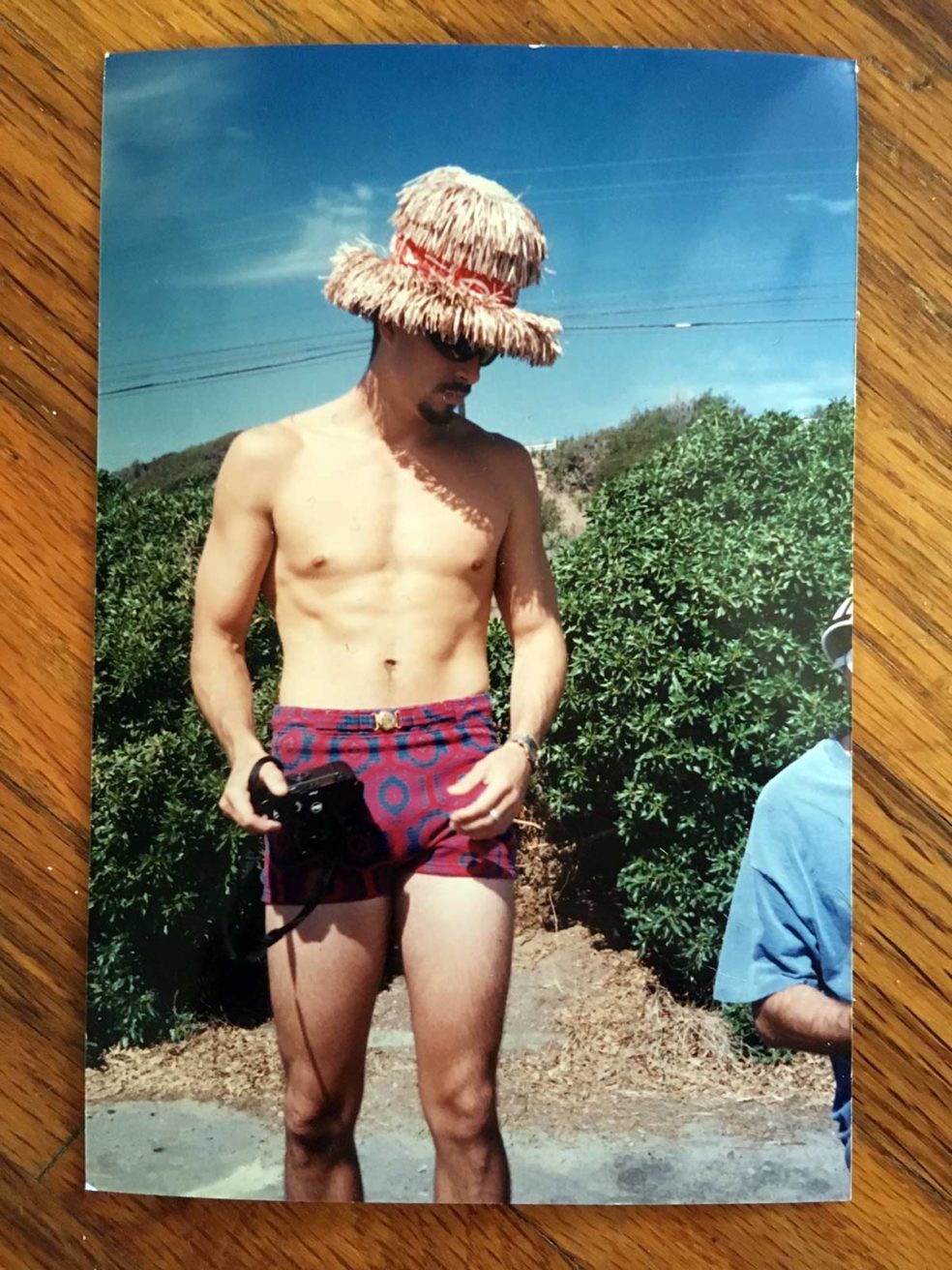 I’m not proud of this moment but that’s me. There is no denying it. This is photographic evidence of just one of the MANY times I’ve sold out. The case in question dates back to the Southern California of the late 1990s. The only personal object in this photograph is my trusty Leica. The rest, props in a long-standing, entertaining charade that was my career at Eastman Kodak. More specifically, Kodak Professional.

Don’t get me wrong, I loved my time at Kodak. I worked with fantastic people, we had great products and life was SLOW compared to the hectic nonsense of today. When I started at Kodak I had no mobile phone and no computer. It was heaven. Oh, did I mention they gave me a company car? A jet black Pontiac Grand Prix with a broken side mirror and a faulty electrical system. The doors would lock and unlock endlessly as I drove down the tarmac, and sometimes at stoplights, the trunk would open by itself. “Thunk.” I called the beast The Millenium Pontiac and would make the jump to light speed anytime I drove south to San Diego across the open expanse of Camp Pendleton, a location I viewed as offering “unlimited speed.”

I would also use the entire inside of the car as a drying rack after marathon, all night darkroom printing sessions at my friend’s underground lab. (No joke, this was literally a hand made cave created when my friend’s father tunneled into a mountainside.) I would lay out my prints (Kodak Ektalure Paper.) on the seats, dashboard and rear window then drive triple digits on my way north.

Kodak was a compromise. All jobs are for the most part. The question is how far are you willing to go? How much will you give up to gain? Taking the job was easy for me. My salary when I started was around $37,000. I thought this was more money than I could ever use and my first thought was “Cool, I’ll have enough to donate to other people,” which I did. (The following year I got a MASSIVE pay increase after Kodak realized the California cost of living was astronomical compared to Rochester, New York.)

I had never worked for a legendary company like Kodak so culturally I had a lot to learn. I was also asked to do things I loved and other things that made me shake my head. Again, every job I’ve ever had consisted of these same ingredients. I was a hot tub installer once, not a job I recommend, and had to do a TON of things that made me question humanity in general.

My boss at Kodak was awesome. He is no longer with us but I think about him on a regular basis. On my first day on the job he approached me with a perfectly straight face and asked if I could grow a beard. I assured him I could grow something resembling a beard, kinda, and when I asked why he said: “How do you feel about wearing women’s clothing?” Before I answer he said “Hang on,” and took off to talk to someone else. I began to wonder what kind of crew I was running with. A few months later I was in full makeup wearing a dress in the back of a convertible driving through Venice Beach. It’s a long story. Was it a sellout? Probably, but totally worth it.

A few days ago I told a friend I was pondering the idea of getting a Leica, full-frame digital camera body. Wait, wait, wait, let me explain. (There are so many now I don’t even know which one.) Yes, I love my Fuji system and have no plans to sell it. For the money, in my opinion, Fuji makes the best system you can buy. Capable, logical, small and affordable. But it’s not full-frame and the imagery, especially the daily stuff I make, does not look like my film-based work of yesteryear. (By far my best work.) No matter what I do with the Fuji system it will not replace the look of my film work. (Oh, and this is on the way….)

I recently spent a day investigating the idea of starting a new, New Mexico based project, one that comes with A LOT of responsibility. It’s too good NOT to either use film or find something equivalent to some degree. Would I like to use film? Sure. Will I? No. It does not work for me at this point. So, I need options.

This story, if I can even get it off the ground, is going to require time, luck, patience and razor-thin access success rates. I can’t carry much. I can’t leave anything in my truck. I’ve got to be quiet, subtle, smooth and accommodating. I look back on my projects of the past. Sicily, Morocco, Bolivia, Man vs Nature, Peru, Panama, the US/Mexico border, Dogs Can’t Read, New Mexico, Uruguay, North Shore Journal, etc. All Leica. Thousands of rolls, thousands of prints. (You can find excerpts of these stories here.)

So when I told my friend he said “Milnor, you sellout,” as he should have. He was joking but perhaps there is some truth to this. Now, in my defense…I already have a lens. My trusty 50mm f/2 is gathering dust and this baby is my all-time fav lens on any system I’ve ever had.

But here is the funny part. In all my years of shooting Leica, which date back to my M4-P of the late 1980s, I’ve never really done anything with Leica outside of teaching one workshop in Palm Springs roughly ten years ago. And I know for certain I was not their first choice. In fact, I don’t think I was there second, third or fourth choice. I think they were desperate and I was around. So many people THOUGHT I was sponsored by Leica but I never was. And like I said, I was never in the conversation. I’ve known many people who were sponsored, others who I felt should have been but weren’t and others who were who shouldn’t have been. I can say the same for most brands actually.

I’m not looking for sponsorship. I’m looking for a camera body. I won’t have the chance to sell out in this case but I just wanted you to know if the opportunity to sell out happens in my life you just might see me in a straw hat and speedo once again. Compromise without complacency is maybe the model I’m after. What would happen if I was approached by the makers of my fountain pen? My shoes? My van? My eyeglasses? Or what if it was Exxon Mobile? Hmm, don’t be so quick to answer. I’ve seen oak trees fall in a steady wind.

Before I end this rambling mess I need to add something. My work at Kodak was about subliminal sales, although I was titled as a “Tech-Rep,” but my primary role was understanding the client and helping them integrate with the company. I do feel it was solid work and it led to many friendships I still have today. So, in other words, well worth it.

Last week I went to a friend’s social gathering. Met a Ph.D. in Ethics. “What are ethics?” I asked to see what his response would be. He looked at me like Hannibal Lecter but the question does beg an answer. “It depends,” could be the best response. Those gray areas of right and wrong. I think we all have skeletons. Mine wear pink suits and funny hats.