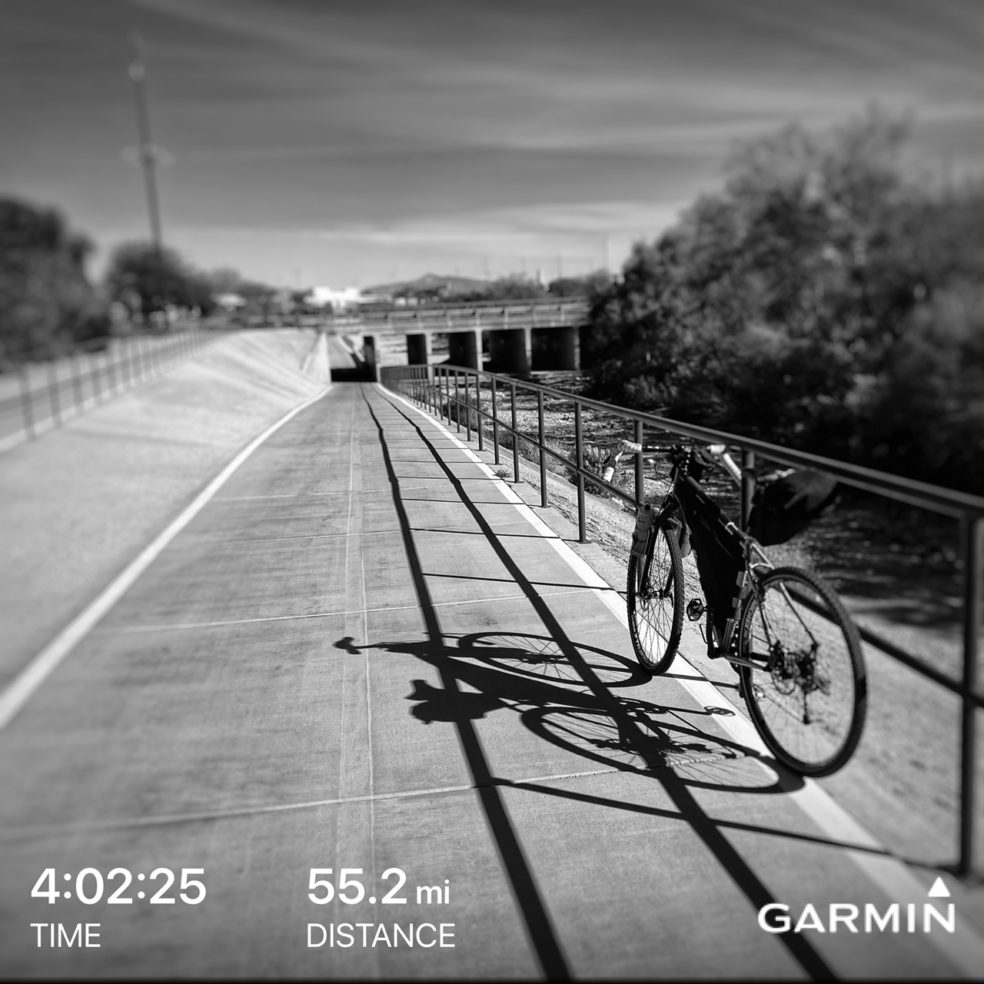 “I’ll just start riding and then turn around…right?” I told myself as I dropped down the ramp in an industrial section of South Tucson. It’s a loop, and it’s fifty-three miles. I’ve ridden once in the last month, so a plus fifty might be a bit much. But it’s so nice out, and there is hardly any wind. Why am I the only one riding in this direction? The only one. That can’t be good. Should I have packed toilet paper in my frame pack? And if so, how much?These were the kinds of things percolating through my brain last Saturday when I decided to have a look at The Tucson Loop.

Hats off to any city that invests in cycling infrastructure or any other energy-efficient transportation methodology. We have weaponized politics here in the United States and consequently, the bicycle has fallen prey to things like policy, party and general bigoted lunacy. I’m sure Tucson is laughing all the way to the bank as this place has become a winter cycling haven offering mountain, gravel and road options.

Look, I bag on Tucson a little bit here but the message is that we need to adapt as a species. I don’t see adaptation as a finger-pointing scenario. I see it as an opportunity for you and me and your friends and family and my friends and family to sit and ask “Hey, how do we evolve and make a better, smarter world?” High density, energy-efficient urban dwelling is being adapted around the world and WE need to get on board. If not, what is the alternative? Sprawl? Not everyone wants to live in high-density urbanity but many folks do, so why not find a balance that makes at least some kind of sense. And by the way, I’m not a quitter. Tell me something isn’t doable and I’ll tell you to look at the math in another way.

On a side note, my fitness sucks. I still haven’t figured out what to eat before, during and after rides like this. Especially after. The following day I was so mentally foggy I could barely function and ended up sleeping in the van in a museum parking lot. (The part of #vanlife nobody talks about.)

Now, I do think I know the problem or problems. Not enough food prior, not enough calories during and surely not enough recovery fluid and salt after. I really started to fade at forty miles so I pounded everything I had left. Gels, fluids, wafer, etc. I bounced back but the damage had been done. So, I need to get smart.

Winter in Tucson is a cyclist dream. If you haven’t been, saddle up and get to it.