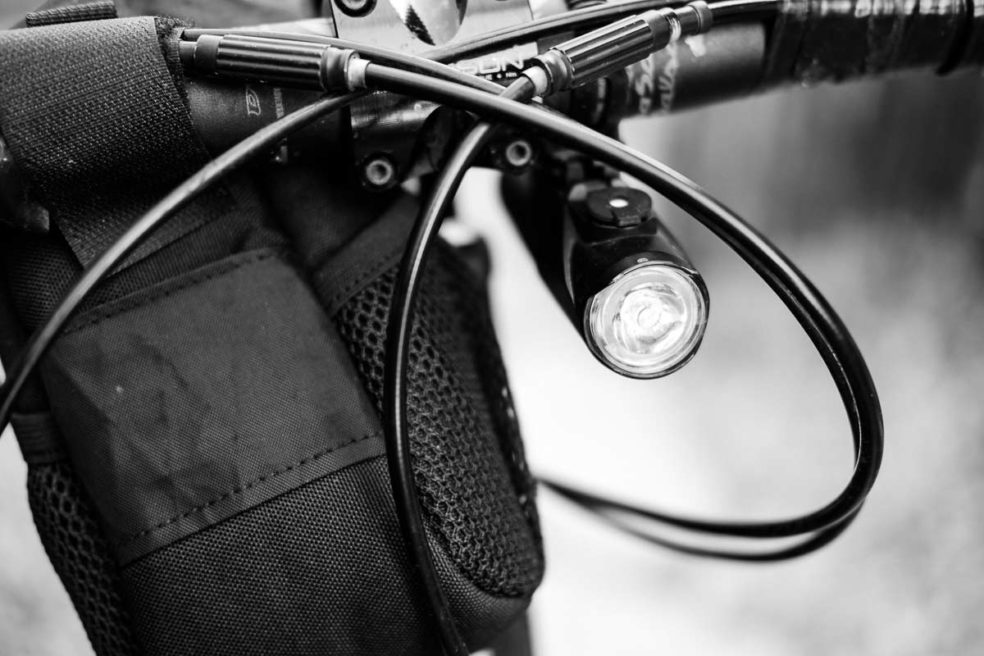 Believe it or not, the cycling world has plenty of machismo. Yes, even people wearing spandex bow out their chests from time to time. My calves are way too skinny for me to attempt this. One of the odd byproducts of this machismo is bike lighting. Again, believe it or not, I know a fair number of cyclists who refuse to run lights because they simply believe that lights aren’t cool.

This same thing could be applied to the bike mirror that one wears on their helmet to see what is coming up behind them. Bike mirrors are REALLY dorky but they can save your life, especially depending on what kind of riding you do. I’ve never seen a mountain biker with a mirror, but I’ve sure seen a lot of bike touring pros wearing them, and for these folks it makes sense.

Bikes lights, however, can be applied to ANY kind of bike. And in my mind, they should be. And for those of you saying “I mountain bike and there is no way I’m using lights,” first let me say this. I don’t actually care what you do, but I’m going to share my opinion anyway. In the last five years, I’ve seen two head-on collisions between mountain bikers both resulting in ambulances being called, both resulting in broken bones and lots and lots of blood. Both crashes could have easily been avoided with bike lights. The first wreck was in Texas in a greenbelt area. One of the guys involved in the wreck almost hit me but I remember my front light painting him from about fifteen feet away and he took evasive action. The guy behind me, not so lucky. They not only hit they hit helmet to helmet. It was ugly. The second wreck was in California, early morning, dark. Two mountain bikers on a short stretch of pavement between trails. These chaps also hit head-on but what I remember was the amount of blood and the fact that when I rode by later in the day there was one cycling shoe left by the side of the road. And a giant blood puddle stain.

But there’s more. Last year I was riding from Santa Fe proper to the ski basin at 10,000 feet. This is a classic Santa Fe ride and one I’ve done many times. I was riding with someone who doesn’t use lights. And this ride, people, is a total twisting, two-lane route up into the mountains. There are plenty of blind corners, narrow shoulders and loads of people in gigantic RV’s entering the mountains to “rough it.” It’s the PERFECT spot to run lights. But my friend, nada, nothing, zilch.

Before we started the ride I attached a light to his seat post. I actually ended up giving him the light which I now wish I had back, but that is another story. Halfway up the ride, we stopped for my friend to “throw a squirt,” as we like to say in my family. Minutes before a driver passed us on his way up the mountain. While we were stopped this same driver came back and pulled over. I wasn’t sure what to think. Is he going to yell at us for riding on the narrow road? Is he a bike nut who wants to check out my mid-grade ride? Is he creepy and he wants to touch my leg? I DIDN’T KNOW.

“I just wanted to thank you guys for having lights,” he said. “It makes it so much easier to see you and gives me more time to figure out how and when to go around you.” My buddy just looked at me and smiled.

Two days ago I was riding early morning west of Santa Fe. I came flying out of a downhill and merged with a two-laner heading into a housing development. About an eighth of a mile up, I saw an elderly woman walking her dog. She froze. I could see that she was nervous but didn’t know if she was nervous because I looked like a space alien or because she was afraid for her dog. I slowed down, waved and said “Morning.” She was holding her dog tight, and she still looked terrified, but she said: “Thank you so much for having lights.”

And this brings me to my point with this mess. Lights aren’t necessarily about YOU. Lights are about THEM. I feel that the age of the Internet has turned many of us into wildly self-centered, narcissistic drones, and one of the main reasons we find ourselves in the political and social mess we do is that we tend to spend the vast majority of our time thinking about ourselves while ignoring the needs of everyone else.

Bikes lights a symbol of a cultural abyss? Milnor, have you lost it? No. In fact, I think I’m on to something. So, if you have lights, power on baby. And if you don’t have lights, go get some. They just might make you a better person.