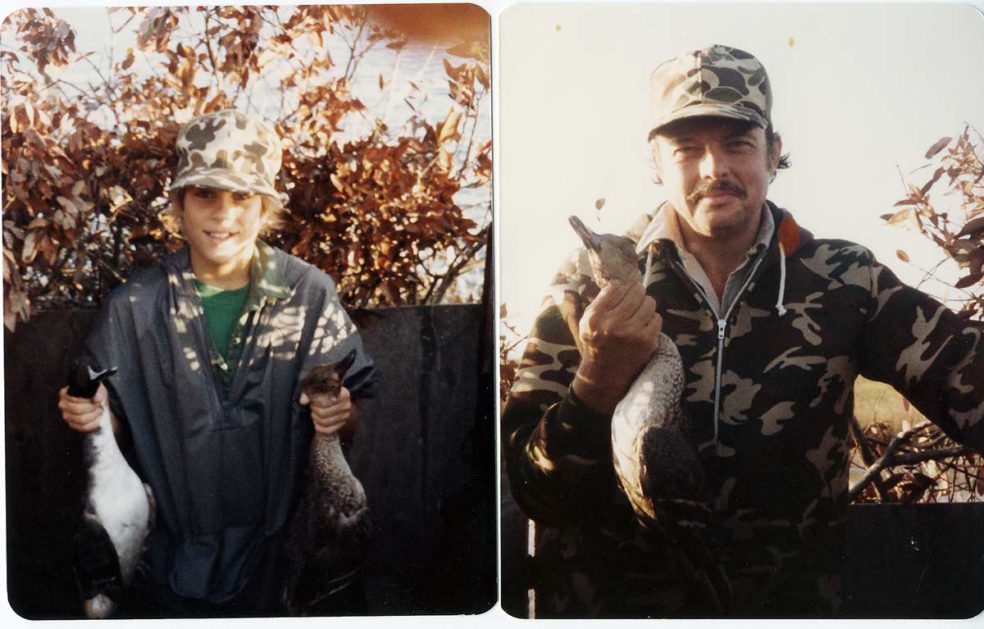 What must it have been like? What must it have been like to be my father? There are my older brother and sister to consider. My brother had the most contentious relationship with him. My brother is the first, the oldest and perhaps the most unlike him. My sister with her reluctant truce in place. There were prickly moments between father and daughter but otherwise, the peace treaties were in effect. By the time I arrive, we were three. I think I was the most like him. Maybe he was practiced by the time I arrived, and it’s as simple as that, but I don’t think so. Not for a moment.

Dad and I shared common interests. Outdoors, hunting and fishing. He was awkward. He was lumbering. His hearing was bad. His eyesight was bad. His knees were bad. Add to the list a total lack of patience, a quick temper, and parents who told him he was never good enough, and what you have is the flawed man who raised me.

My first hunt was for ducks. An Indiana winter day. Cold, gray and miserable, but that’s what we knew. The smell of decaying foliage, slick with rain. Dad with his 12-gauge and me with my BB gun. I never took a shot. It was just about being there, with him, and learning the experience. He brought me hot chocolate and made sure I didn’t drown getting in and out of the homemade blind. He used to just stare at me with a slight smile on his face. I don’t know what he was thinking. Pride? Fear? Insecurity?

He would talk to himself in the car. His arms moving, hands gesturing, as he worked things out. It was as if I wasn’t there. He knew he didn’t need to hide from me, but he still did from time to time. He hid from all of us. Like men do. Women sometimes too.

I remember those dry mouth moments of embarrassment, of admission. What happens behind closed doors with all families. What you hide, or try to hide from your neighbors.

I think he knew I would leave, that I would one day depart his world and only return from time to time. I don’t know what he felt about this, but I don’t like the way it makes me feel now. Our bond was still there, but marginally. Thin and far from substantive. We never spoke of photography, ever. It wasn’t a real job in his eyes. It was a hobby.

I knew he was slipping long before the day he died. I could see it. Making my biannual treck to their house I would see the changes in skin color, mental sharpness, or lack thereof. He was failing and it scared him. I only remember him being in fear, true fear, once or twice, but his recognition of the fact I knew he was scared was not something either of us could put back in the bottle. The rock, the man, my father faltering. A painful moment for both of us. Like track runners completing a relay. The baton passed from one hand to another, one generation to another.

He could be so understanding of the most unlikely things. Like getting arrested. One phone call. I remember him laughing, but then trying to act tough. Or getting suspended from school. “Did you do it?” he asked. “No,” I answered. He was okay with that, trusting me to own up if the crime was mine but it wasn’t. “Well, you will have a few days off to think about it,” he added. And then I told him they also wanted to “give me licks,” at vicious paddling with a wooden rod wrapped in leather straps. “Get in the car,” he said. Arriving back at school, dad calmly walking in and then through the vice principles office. Leaning over the man’s desk and saying “You touch him and then I come and touch you.” The suspension and licks suddenly disappearing. He first put a shotgun in my hands when I was very young. Natural for me, like breathing. Arms, eyes, and motion all becoming one, even the sound of the chambered round disappearing. The sudden, violent pressure on my shoulder as the shot pattern filled the sky. The first tournament he entered me in I won. A boy shooting against men, and yet there I was turning around to watch the crowd watching me. I didn’t care, but he did. He more than cared. “How did you do that?” he asked, genuinely mystified. He needed to work, to train, to fight his genetics, but I did not. “I just do it,” I said. “I just feel it and I make it work.”

He died in front of me. A heart attack causing him to go down and never get up. There was the failed attempt at CPR, he reduced to a broken machine in front of me, something to be fixed, repaired and returned to service, but it was not to be. You might think this was a bad thing, and to some degree it was, but I’m actually glad I was there. He was looking at me when the lights went off and the color went away. Eye to eye. I was the last to know him. But from this emerged an idea. Yes, a book idea. This book is for the family only, but I might share a piece or two as I get closer. Like now maybe.

Ten short stories, each 5000-words apiece. I have the title, the subtitle and four of the stories completed in first draft form. They all need much work but the bones are there. I’ve never done a work of non-fiction before, and I have to say it’s a unique challenge. You can’t hide from a project like this because the entire thing is on my plate, and I have no reason NOT to do it. I don’t need to travel and I don’t need access. I just need to flex my memory and focus.

This is the first paragraph from Gambling, Guns, and Greed

Dad’s friend arrived in a Chevrolet Suburban held together with duct tape. I don’t mean the bumper or a spare part or two, but the actual middle of the vehicle itself was completely wrapped from the roof to the undercarriage like a damaged Christmas present. The rear doors were unusable and the vehicle had obviously been through a major accident. It was barely on the right side of drivable but probably not on the right side of legal. And yet there it was. The vehicle was driven by one of dad’s friends, someone he knew not well but perhaps just well enough. The man belonged to a group dad had encountered during his deep dive into the world of competitive shooting, a somewhat wild, misfit bunch of gambling gun lovers who moved through the phantom world of underground shooting sports. As it turned out the truck had not been in an accident, at least not the typical kind. The destruction was a result of an angry wife, or jilted lover, who took it upon herself to destroy his vehicle with her own, ramming his beloved truck again and again until her vehicle sat idle, bested, smoke pouring from the hood. This episode might have fallen in the “rare” category for most of the general public, but in this crowd, it seemed like a Tuesday.