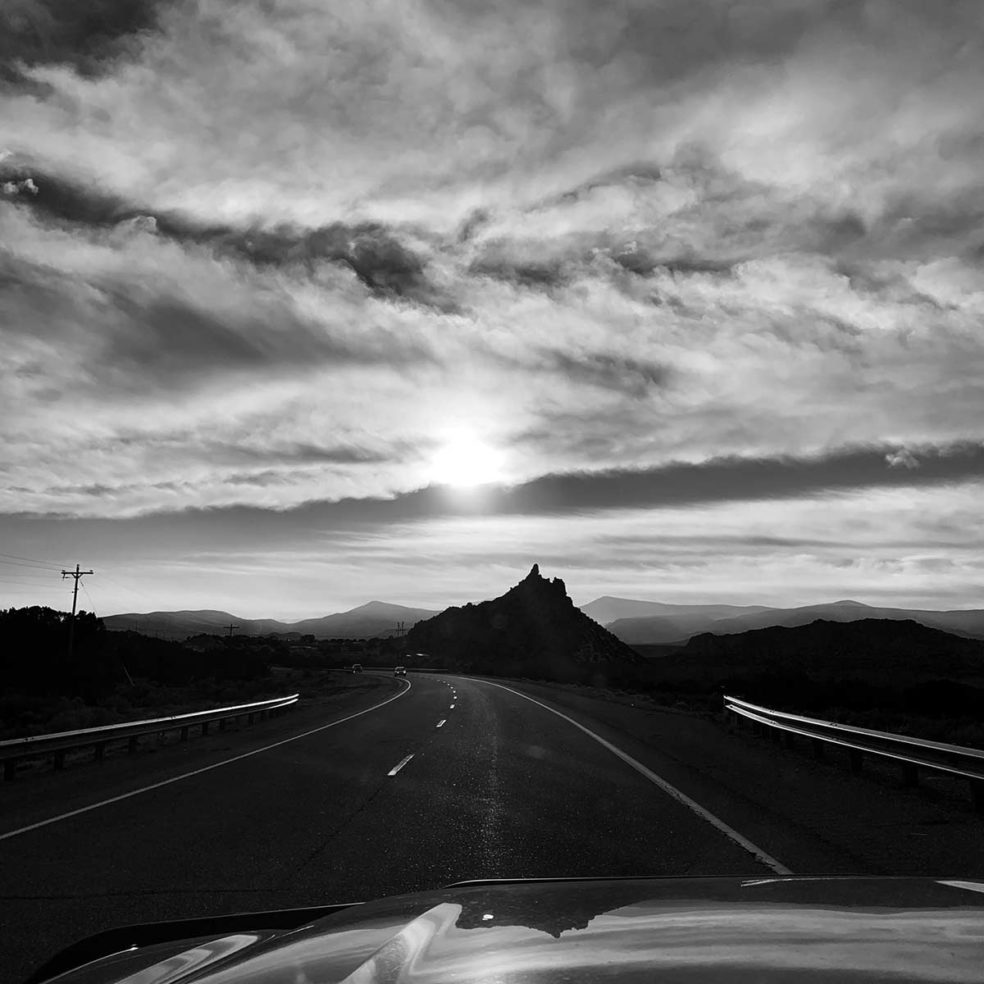 I don’t want to be anywhere else.

The West is being developing at an astonishing rate. If you too want to see this place you better go now because it won’t be long before vast swaths will be off-limits, gobbled up by city-dwellers wanting their piece of paradise, millionaires and billionaires buying up and fencing off or just the universally corrupt American government who wants to sell it off, mine it, strip it and build it out. The West, as we know it, is doomed. The only people who say The West is still vast and undisturbed are either city dwellers used to living in high-density environments or people who have never been. The key over the next twenty years will be access. Or lack thereof. Okay, enough of the bad. Let’s talk good.

These past few days included roughly a thousand miles of main road/backroad driving. Santa Fe to Denver and back with a little business in the middle. I’ve driven this route many times before, and I have to say, it never gets old no matter how things have changed. The Rockies, the San Juan’s and the Sangres, just to name a few. Massive ridgelines of 14,000 footers, snowcapped and begging to be summited, explored, gazed at and bowed down to. Not to mention the rivers like the Arkansas, Chama and Rio Grande. Smoking chimneys, raging wind, and patches of black ice. What’s not to like?

My goal? Easy. To visit the Colorado Photographic Arts Center and get a better understanding of their Veteran Workshop Series, currently in the second year of existence. Anyone who goes to war, at least in my book, deserves a tip of the hat. Support, logistics, communication, service or combat, doesn’t matter the role. CPAC reached out to Blurb last year asking for support, and by the way, asked for very realistic support. And they did so politely. We jumped on it and last year’s workshop went well. This was year two and their approach changed slightly with a critique session before the show which will be up shortly. In addition to the critique and show there is a magazine, of course there is a magazine. Last year’s issue looks great, and I’m sure this year’s will too. Veterans come to the center for a four-month intensive photography training course where they must commit to and complete a long-term photo-essay. This is about real learning, not dabbling. Each person has their own personal agenda. I have to say, it’s pretty darn great to see someone new to photography be SO transfixed by the medium. And everyone made good work in addition to simply having breakthrough moments.

Now, I went to Denver to learn more, yes, but also to throw a wide net of content in an attempt to make a short film about the project. Part practice, part job. I interviewed five people, shot motion and stills as well. Now, I will attempt to take this mess and make something remotely coherent. And I want to do it next week. When Blurb did their first round of customer profile films back in the 2007/2008 timeframe, with a real Dslr crew, the films were really solid but the turnaround was months and months. No knock on the filmmakers at all, but post is where the magic happens and when you rush it you get a lot of either similar looking films or films that just don’t enlive the audience. I just saw a film like this, and in the first fifteen seconds I thought to myself “Uh oh.” Heck, there are plenty of films like this on Netflix. I don’t want to make something like this. So, I’ll take my time, but also try to eliminate anything else on my plate so that I can truly focus on this baby. I own it to the vets and to the center.

Now, when I’m making my way too and fro Denver I’m driving my trusty Tacoma. I’ve got a full review of this vehicle ready to go, but I was waiting to see what Toyota was going to do with the transmission, a model that has sparked derision in countless Tacoma owners. In short, the transmission in the latest model of Tacoma was/is a complete disaster. But, Toyota recently updated the code and it made a HUGE difference. This was my first trip to New Mexico with the updated code. Huge difference. The truck is still underpowered, like every Toyota I’ve ever had, but overall it’s a great vehicle. And I spend A LOT of time behind the wheel. The truck is a 2017 with 31,000 miles on it. I will return to California in the next few days, get it serviced and probably buy an extended warranty because I’ll probably have this truck until gas is no longer an option. Then I’ll probably bury it and end up living in the carcass while humans scurry about on the Earth’s surface attempting to find food in the rubble left behind after the short range ballistic misile treaty was torn up thus allowing the arms race to reform and explode. I’m just filled with happy predictions!

Why are there no images here from the Denver project? Because I want to save them for the film. So in the meantime you get Tacoma snaps. Yes, made while driving! What could possibly go wrong? This drive provided the formula for my first trip of Spring 2019. I know the forest road. I know the summit. A LOT of exploring to do. I used to get up in the morning and look at maps of the world and think about all the places I haven’t been. I don’t do that much anymore. I now study the same map over and over and think about what it would be like to truly understand a place like New Mexico. Truly understand it. This is a huge undertaking, and frankly, one that borders on the impossible at my age. To really understand this place, especially photographically, would require me living here full time. And it would require me being fluent in Spanish and also have a range of connection I currently don’t have. There are still places in this state that simply do not want outsiders. These places take months, years even, just to get access. And with modern photography you must prove your innocence as most civilians assume guilt just for having the camera.Oh how times have changed.

But this place is totally worth it. I’m not sure ANYONE has ever summed this place up or even attempted to. I think of the photography projects I’ve seen but most are islands. Many are incredible islands, but the dots have never been connected. Now, like all dreamers, I have a long-term plan. One that involves funding, structures, plans, much hair pulling and potential disaster, but something this important is totally worth fighting for. Stay tuned my people and keep your powder dry.