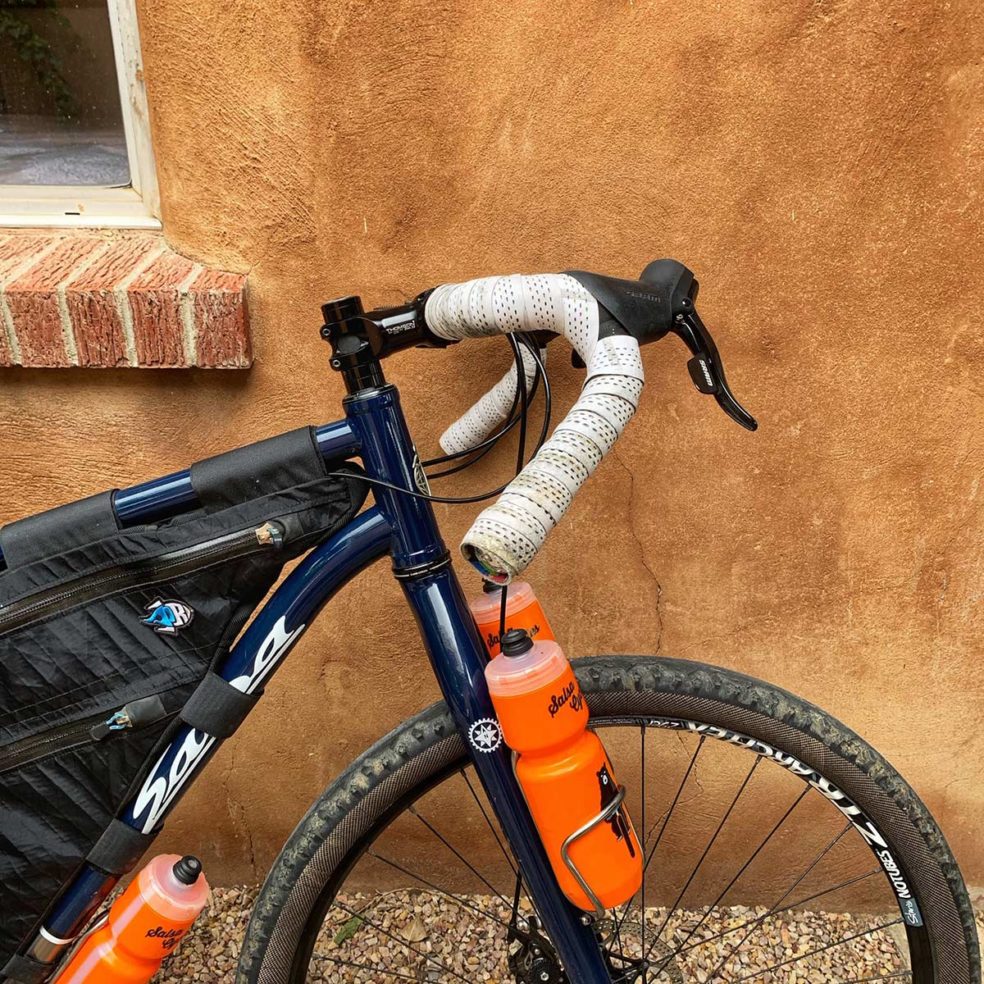 I love bicycles. Yes, the bike has become a political pawn, like many things here in America, and it truly pains me that this is the case because the bicycle is one of the most innocent yet impactful inventions of all time. I’m in Santa Fe now and there is a “People for Bikes” van parked less than a half mile from here. I LOVE seeing this. I want a pair of their socks, actually, but that is another story. (Turns out it’s not their van, just a sticker.)

I’ve always dreamt of a massive downsize, which I’m still angling for. A van, a life on the road combined with a small base here in Santa Fe. Now, if I can just get wifey poo poo to downsize her massive toiletry collection we still have a chance.

I currently own two bikes. I’ve had both for many years. But I still find myself pining for more. Bikes, like other tech, change frequently, and for someone who spends mucho time on two wheels these updates and advances can be hugely impactful. But do I really NEED a new bike? Ah, no.

I’ve always wanted to be a one bike guy. Just one. Just one amazing, do anything bike. Let’s work backward. I don’t do a lot of mountain biking. So, technical singletrack, downhill, etc. It’s not that I don’t like to mountain bike, I do, but I gave my full suspension mountain bike away. Someone gave it to me. I rode it for a few years and then I passed on the good fortune by giving the bike away to someone else who had not yet had the pleasure.

I have a road bike, a Bianchi D2 Carbon Cross, which I’ve had and ridden for ten years. This bike started as a cyclocross bike but I modified it to become my road machine. It’s nice but not super nice and is primitive compared to modern road bikes. But that’s okay. I know it. It has Dura Ace components which will be around long after I’m gone. I’ve crashed it once and it still survives. I’ve ridden this bike up dirt roads near Los Angeles and I’ve ridden it at 10,000+ feet in the mountains in New Mexico. But this bike is limited by the carbon frame, the lack of mounts and a few other basic things. This can’t be my ONE bike.

My other bike, however, is prime for becoming my only option. The 2014 Salsa Fargo Titanium, drop-bar adventure bike. Even the sound of it makes me long for the open stretches of the Atacama or the insanely dangerous lines of the Trader Joe’s parking lot. Titanium frame, carbon fork riveted for cages, aggressive geometry and capable of a wide range of fenders, racks, cages, tires, etc. I love this bike. If I had to choose my ONE bike right now, this is my only option.

So from this day forward, I make my plan. It might include a second wheelset but otherwise, I’m going to commit to this bike as my one-bike future. Is it as fast as my road bike? No. It is light? No. But it’s comfy, fast enough and durable enough to do everything. Commuter, roadie, gravel for sure and I have ridden it on singletrack.

If you are on the fence about biking my advice is just go. Get on it, stay on it and figure it out. Biking is so liberating, so healthy and so much damn fun. Yes, there are drivers who act like you are the root cause of all evil in the world but you can’t change those folks regardless of what you do. They hate far more than you and your bike. Get lights, ride smart and just get out there.