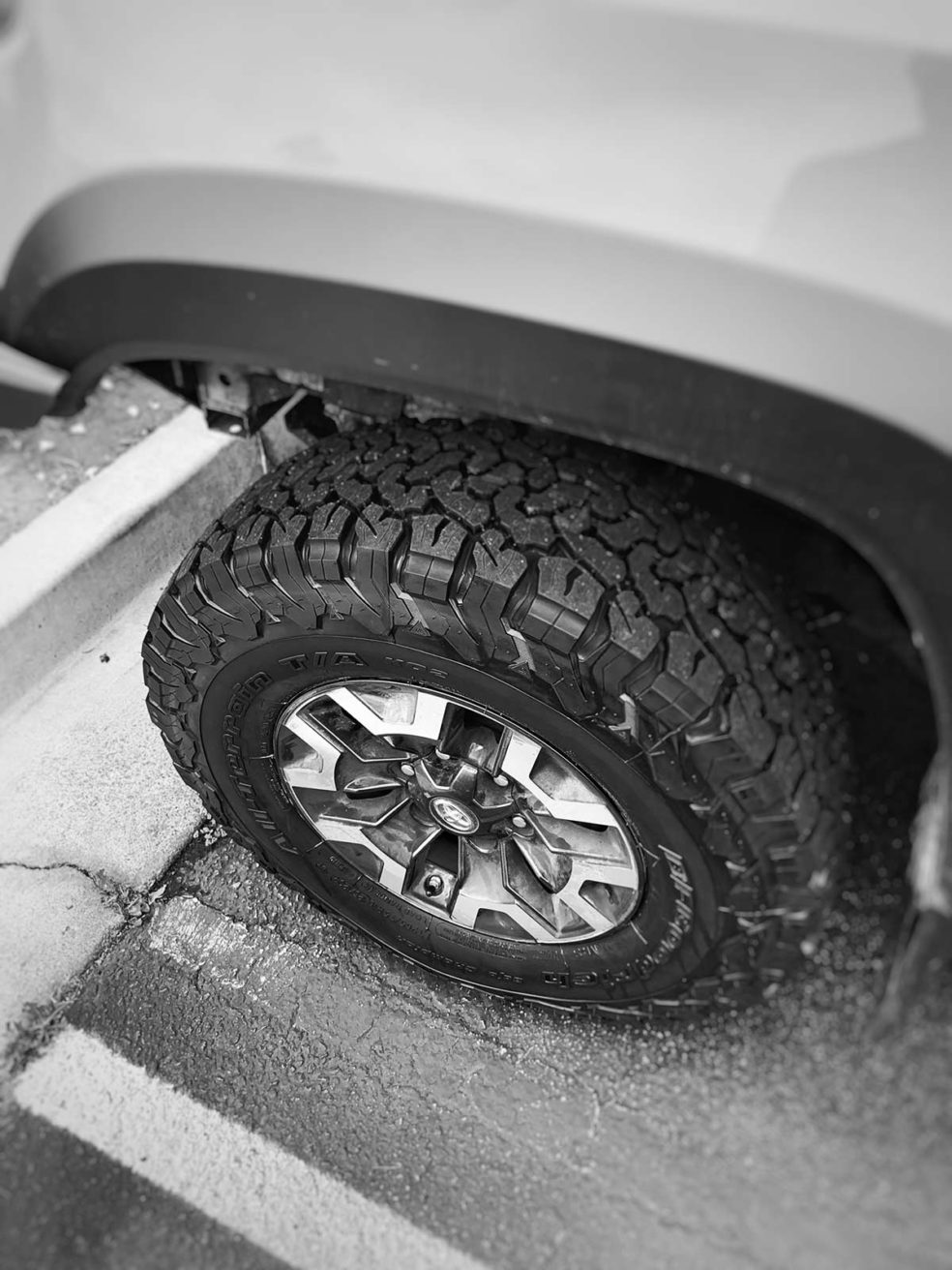 You might be wondering, “Milnor, have you lost it?” “A post about truck tires?” No, haven’t lost it but I plan on doing so as soon as possible. For anyone who subscribes to truck born adventure, you will understand where I’m going here. I don’t believe YOUR vehicle is actually YOUR vehicle until you are on at least your third set of tires. By the time you reach your third set, you are beginning to understand the nuances of your vehicle. (My current truck has 41,000 miles and feels like it is beginning to break in.)

This is my SECOND set. I’m on my way to my third set, just not there quite yet. My first vehicle was “assigned” to me when I was nine years old. A three-quarter ton, manual transmission, four-speed, 4×4 Chevrolet pickup. I was too small to push in the clutch and see out of the windshield at the same time. This is a normal Wyoming lifestyle, so don’t think much of it. And, I drove on the highway at nine…pulling horse trailers.

My first “civilian” car was also a truck of sorts. A Chevy S10 Blazer, 4×4. Automatic this time. I tricked this truck out too. Headers, dual exhaust, bumpers, and larger tires. BFG KO’s. I eventually gave this vehicle to my brother, but it was promptly stolen. And then it was stolen again. And again. Each time the thieves would, for some unknown reason, take a chainsaw and chainsaw out the stock AM/FM radio. They would leave the truck mostly okay but for some damn reason, they REALLY wanted that shitty radio. Eventually, they stole just about everything and left the shell of the Blazer in some backwater neighborhood. It was pronounced DOA upon arrival at the shop.

I moved on to other trucks over the years. Toyota pickups and Landcruisers, my favorite being a 1983, four-speed, 4×4, FJ60 Landcruiser that was built like a Sherman tank. Every single truck I had, at one point or another, had BFG KO’s on it. So when it came time to get new tread on the Tacoma it was an easy decision, but this time around I was able to upgrade to the KO2.

These are often referred to nowadays as “your father’s tire,” as the kiddies out there have, like they do with all things, moved on to other options that are what I would call “flavors of the month.” But underneath these other brands and models is the BFG. I’ve had these tires go 80,000 miles. Not that this is normal, and I don’t actually expect this new set to get nearly this many miles, but the point is they can and they have.

For those of you gear heads, I went with the slightly larger than stock 265x75xR16, but only because they were literally $50 per tire cheaper than the stock 265x65xR16. So odd but that’s the reality. How do they look? You be the judge. I say they look fantastic. And oddly enough, even though they are more aggressive than the stock Wranglers that came with the truck they are quieter on the highway. At the moment my truck is entirely overloaded as we are still mid-move. More on this later.

You might be asking why do you have a truck? Good question. When I lived in the city and led a very different life I drove a hybrid car, which is still the best city car I’ve ever had. I do love my hybrid cars. But my life changed a few years ago and getting back to the remote places became much more a part of my life. I don’t purposely go 4x4ing. I use the truck to get me to places that I need to photograph or need to find so I can launch climbing, hiking, cycling or fishing expeditions. And, I can’t get up my NM driveway in the winter without a 4×4. Much of the state is unpaved so rain, snow, etc. makes things interesting. I also have all the equipment required for my “needs,” which makes the truck essential. And I sleep in the back. Yes, it’s a gas hog. But I counter this by riding my bike as much as possible when I’m in town.

I’m looking forward to getting these tires dirty.