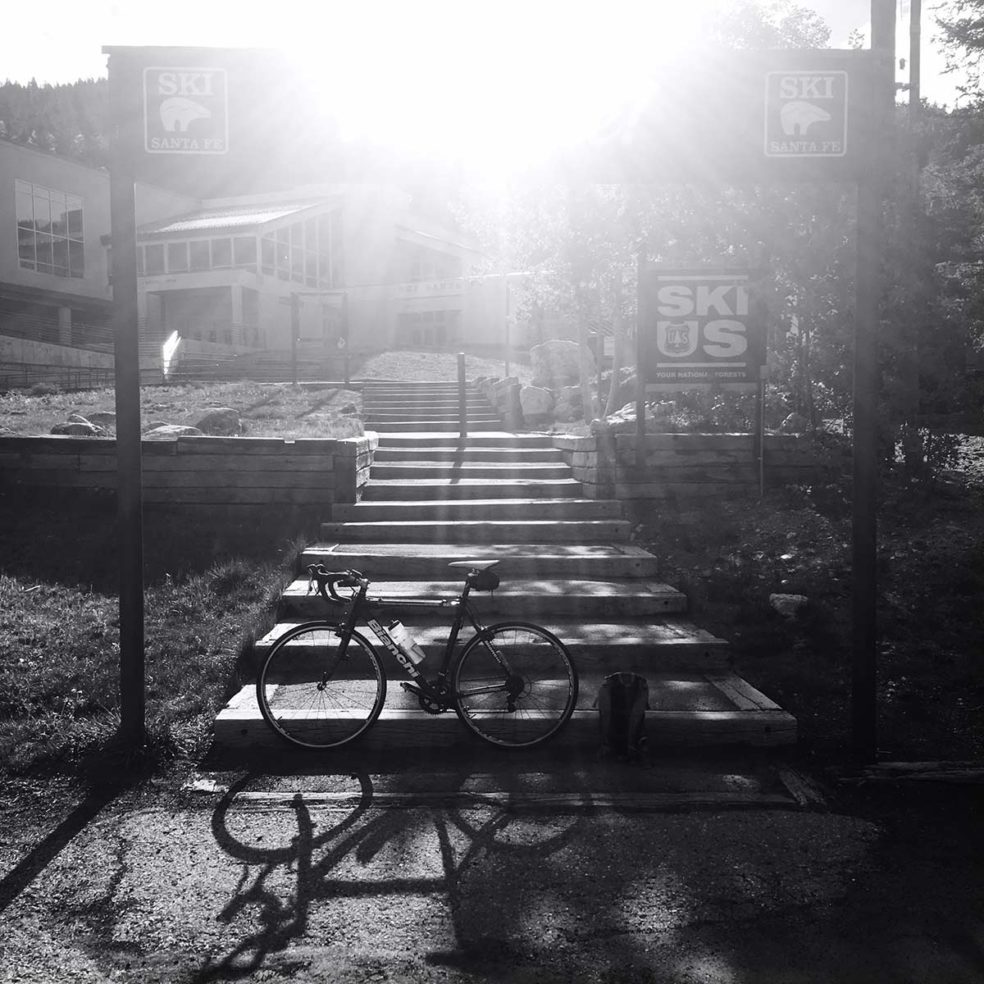 I’ve been here for less than a week, but I’m okay with the altitude, so it was time to stretch things out a bit. I started on Monday with a totally open half day. Drove to Aspen Vista and just started walking. No destination in mind. Even though it was a holiday weekend there were very few people past the first mile of trail. An hour and a half later I was six miles up at just over 12,000 feet. I promptly ate every single thing I had with me and then backtracked down to the truck. My next hiking goal, outside of a basic trip up Baldy, is to do this same hike then tie in Deception Peak, on to Lake Peak and then on to Baldy and back down. I’m guessing it’s close to twenty miles. Not sure when I’ll get to this. When I first moved to Santa Fe I was very nervous about the ski basin ride. Thirty-five-miles basically, a perfect split of half climbing, half descending. The first time I did this ride was on a old steel, touring bike, with racks, and it was a handful for me at the time. It was pre-Lyme, but I just wasn’t in very good shape. Now I have this ride dialed. I’ve shaved an hour off my original time. But the ride is so beautiful I don’t want it to end. Today’s ride was littered with mule deer. I left at 6AM, so pre-sunrise. It was cold, for me, but I knew the sun would soon be burning my backside. I have to say, it feels good to be in control on a ride like this, dipping into and out of the red zone of both breathing and leg burning, knowing that when I dig into the red I can recover while still in process. It took me a while to get here. Others, I’m sure, can do this from day one, and for that I hate them. At one point on the descent, as I neared 45mph on slow bender I came face to face with a mule deer spike. His eyes were HUGE. As were mine I’m sure. He probably thought I was an alien. He froze with his mouth cocked sideways, mid chew. Once past I heard an explosion of animal and nature as he darted away. Had I hit him at that speed I would not be writing this post. I kept it under fifty for the rest of the ride.

When I’m on a ride like this I get a lot of stares, and then at the top you get the same people who passed you in their car coming over to ask you about why the Hell you would do something like this. My answer is complicated. Riding is a challenge. Always a good thing. Riding is healthy, both physically and mentally. The scenery is the same scenery they drove up the mountain to see. And finally, it’s not that difficult. There are so many people who are slightly out of shape, who have somewhat given up, and I think this is a tragedy. Last year I ran into a guy in downtown Santa Fe who was riding from Chicago to Los Angeles. All he had was the clothes on his back, a map and one small bag between his handle bars. OH, AND HE WAS EIGHTY YEARS OLD!!!!! My point people is you don’t need to ride ski basin rides, but I think it would behoove you to find your version of this, whatever that may be. You can do far more than you might imagine, and have fun doing so.