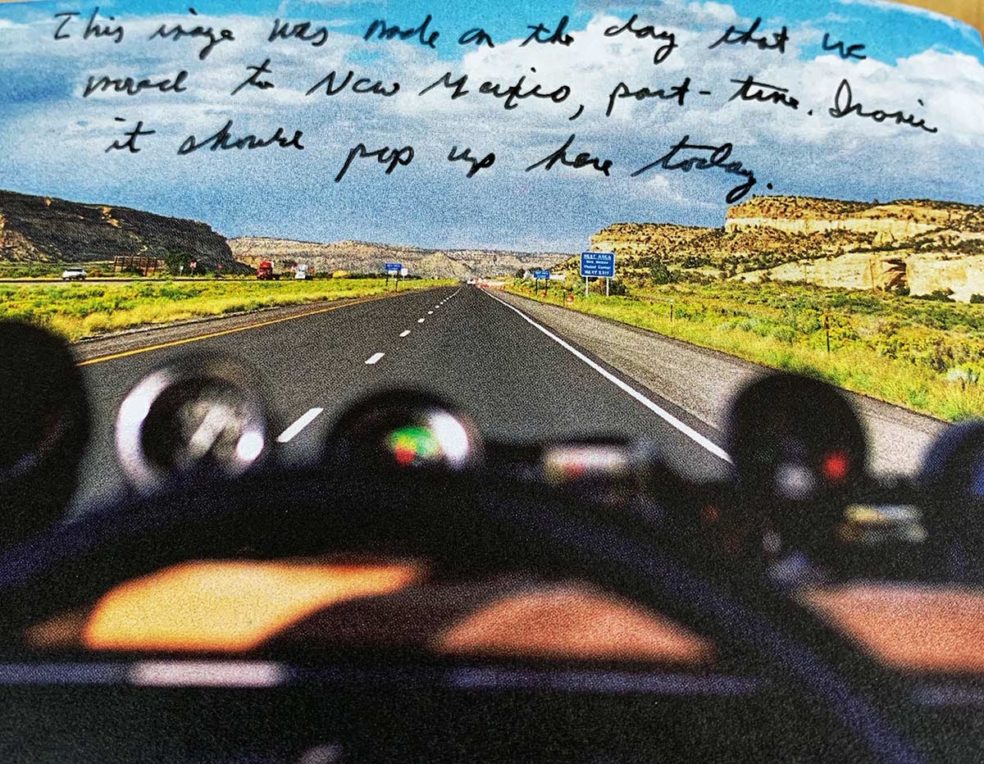 I’m at the Toyota dealership getting one last oil change. “Let’s Get Physical,” by Olivia Newton-John is playing over the stereo. I just walked out of my house for the last time. Well, it’s not my house anymore. As of midnight my roots in California have been pulled, dusted off and put to bed.

This has been a long time coming, but now it’s real. There is no guarantee what we are trying will work but we will go regardless. New Mexico bound. With the termination of my wife’s position at Canon, we are no longer tied to Southern California. The idea of becoming full-time New Mexicans has been tossed about during our early morning talks or late night can’t sleep sessions. What if?

We currently have roots in New Mexico. A tiny casita where our first footprints were put down. We have friends in New Mexico and we have a twelve-year, part-time history, so we aren’t flying blind. But it’s still a big move. (23 years in CA for me, and 36 for my wife.)

I looked outside our house yesterday and my wife was crying. Seeing your dearest friend and life mate crying is never easy. For her the end came quickly, too quickly perhaps. A house that sold in two days and a fast escrow and what’s done was done.(Our house was awesome.) My job is to make her transition as easy and enjoyable as possible. Me, I can endure, but she needs an introduction.

I am often asked “Geez, why would you leave Southern California, it’s so EASY.” There are many reasons but let’s start with the easy. Orange County is a velvet coffin. It IS easy. That’s the problem. This place lulls one into complacency like nothing else. Ask people what they like about Southern California and 99% of the time what you get is “the weather.” Very few people talk about culture, architecture, the clean air, the low cost of living. They can’t because the truth is SoCal is insanely expensive, crowded, polluted and has never been accused of being a beacon of any kind of culture although I will say the Latino community here is the really the best example of a solid culture making this place uniquely theirs.

Over the past few years, I had more than a few friends reach out to me unsolicited and say “Get out while you can.” These friends are all super successful and come from all walks of life, business, and expertise. All of them strongly suggested it was time to leave California behind. I remember turning to my wife and saying “That’s odd.” “So-and-so called, haven’t talked to him in over a decade but he just warned me about California.” This happened again and again. Once our house sold it kept happening but it was now, “So happy you guys are leaving, this was a great move.” Now, time will tell, and I certainly hope that nothing “happens” in California that would force me to look back and say “Whew,” but I will say there was a sense of foreboding.

Our goals moving forward are simply. Downsize, explore, get involved. We want to spend more time with family, which will be easier to some ways and more difficult in others as we are moving closer to some but further away from others. There is a van in our future for hitting every single section of this country. I have plans for Maine, the Great Lakes, Florida, S. Texas and the entire Western US.

The one draw of SoCal, at least for me, is the ocean. It’s undeniable. Powerful, and those drawn to the sea, well, it makes total sense for them to be here. I too am drawn, but in some way moving away makes the draw more crystalline in my mind. I have REASON to come back, to focus on the sea and to enjoy it profoundly. Now, I rarely go, and when I do end up going, mostly during the summer months, it’s packed. So the focus for us to find other locations to embrace the sea. Latin America for example.

What lies ahead is the unknown. I’ll see you there.