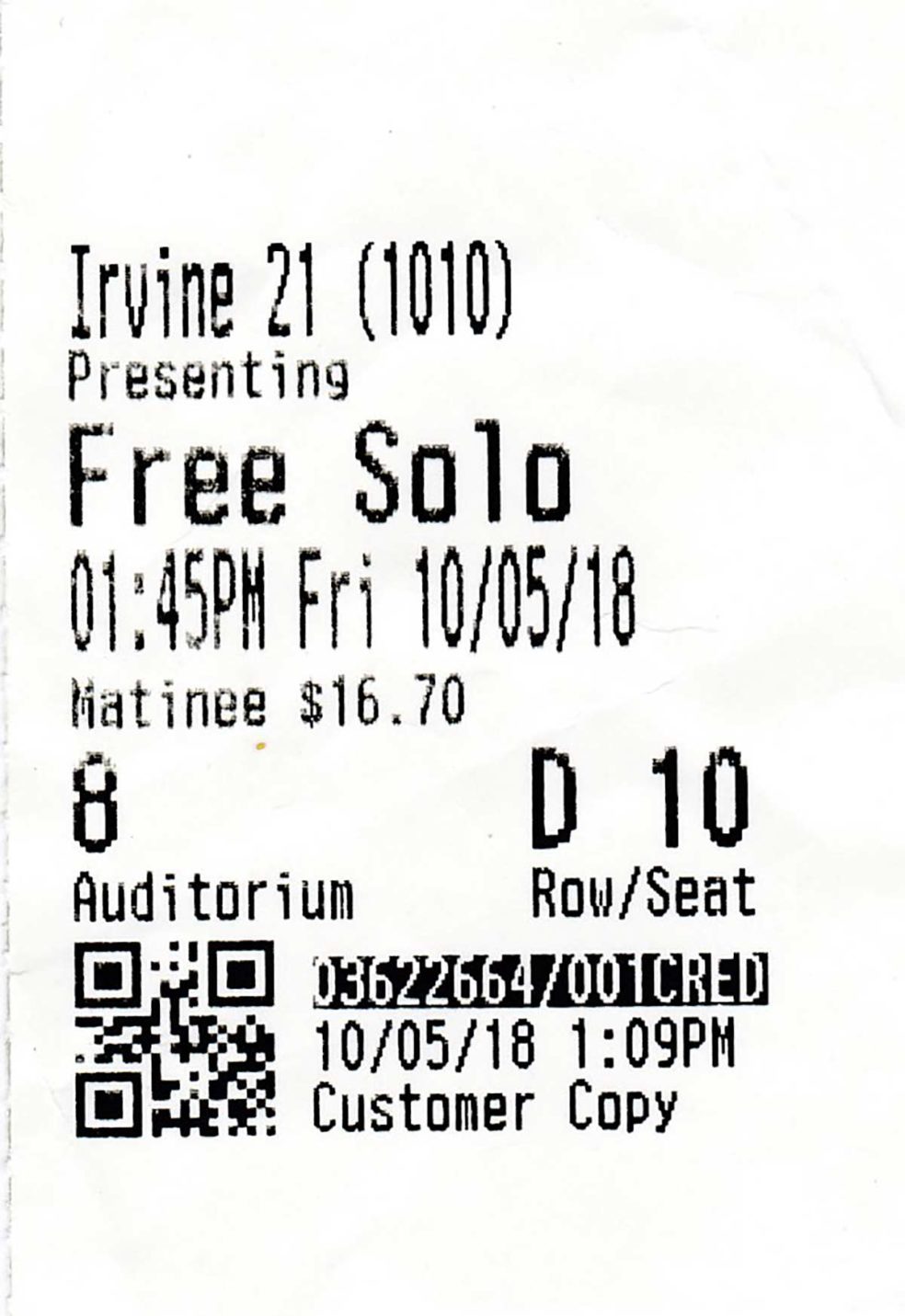 Just to give you a little window into my mind. How about four things that might seem unrelated. Me no think so.

Go see “Free Solo,” a film that documents climber Alex Honnold. Technically, I’m a climber too, but there is, nor will there ever be, a film about me. (I was at the gym this month which qualifies me, sorta.) I suck at climbing. Alex does not. In fact, he’s taken the art of free soloing, climbing without a rope, to an entirely new dimension. I’ve been following his exploits for ten years, and he finally outdid himself. He climbed El Capitan. Free. Yep, all 3200 feet of it. Honnold is a strange dude, and there a myriad of things I took away from the film, about him, that if I write about here, might take on a quirky connotation, and I don’t want anything odd to creep in because the sheer magnitude of what he did is perhaps the single greatest individual athletic “thing” I’ve ever seen. I don’t care if you don’t climb. I don’t care if you aren’t interested in climbing. I don’t care if you hate chalk. I don’t care if you hate nature. I don’t care if you think what he did is stupid, selfish, meaningless, etc. It’s worth seeing JUST for the fact the entire theatre was gasping, moaning, sweating and rambling incoherently. Well, in all due respect to the filmmakers, except for the eighty-year-old guy next to me who promptly fell asleep. Hell, he might be dead. He was still motionless when I left the theatre, but he looked so peaceful I didn’t want to ruin his two-hour nap.

The filmmakers are husband and wife duo Elizabeth Chai Vasarhelyi and Jimmy Chin who you might know as a Canon sponsored still photographer, skier, climber. He once skied off Everest, and he climbed Meru which is ANOTHER film you might want to watch. Personally, I’m sick of the guy because a short film about him is looping at the Canon office in Burbank, where my wife works, and has been for at least the past two years, which makes me want to eat a light bulb rather than ever see his face again, but I digress. In all seriousness, the film is well done, but don’t go looking for cinematic bliss. This film is a like a still photograph based almost entirely on subject matter and very little on composition. This is the reality of filming in a van, filming in hospitals, etc. There are moments of grand visual dimension and beauty, but unlike most films about outdoor action, they don’t CARRY the film. What carries the film is Honnold and his focus and story.

Anyway, back to Alex. Here is the point I want to make. Honnold lives a specific, focused, purposeful life, and frankly, this was the most important aspect of the film, for me anyway. He has lived in his van for nine years. He has almost no possessions outside of his climbing kit. Although he did buy a house during filming. He looked like me shopping at Victoria Secret, wandering around aimlessly trying not to look entirely out of place. He leaves very little behind. I love this. And he started a nonprofit aimed at helping the millions of people living without power. He reads. Okay, that’s it. Go see it. Think about living with purpose.

This ties directly into my next point. My electric bill. Which is why I was asking for solar generator suggestions. I think I almost power my entire life off of a portable, solar generator. Except for the gas grill which I use to cook meth. Just kidding. I use virgin redwood for that. Keeps such an even flame, it’s perfect for explosive elements. But seriously, it was interesting to see my energy usage. Still too high. What’s yours? Here is a strange little photograph of the rear wheel, out of focus because I forgot to change the focus range on my Fujiroid.

Next up, a ride. Nothing special, but MAN am I amped for a tour at some point. I’ll be asking each and every one of you for a free place to stay, free food, potent cocktails and access to your bank account, so just get ready people. It’s gonna be fun. Speaking of living a purposeful life. Let’s talk about my 2017 Tacoma TRD Off Road with Icon Stage 6 suspension and custom bumpers, skids and sliders. Yep, love it. Had it about a year and am just about to roll 30,000 miles. However, I need to offset this somehow, which brings me to my bicycle. Or, let’s be real, my bicycles. I’m trying to use the bike as much as humanly possible. There should be NO reason to use my car for trips under 5 miles, even ten miles. I’m thinking about donating my Bianchi D2 Carbon Cross bike, then using my Salsa for EVERYTHING. I need a second wheelset, but it would be nice to just have ONE bike for all things cycling, and it would save room in the back of the TRD so I can sprawl out when sleeping in roadside parks and random places. Okay, last random thing. Oakley. I have two pairs of Oakley Racing Jackets. Have had them for YEARS. Best glasses I’ve ever had. I have a clear lens and a shaded lens, both prescription. Two weeks after buying the shaded pair I put a nice scratch across the middle of the glass. Dead center. When the light would hit the scratch it would splinter which would cause me to literally see colored spots. I think this is bad. I called Oakley assuming the worst. Guy at HQ says “Ah, I’ll make you another set.” He did. For free. In a world of customer service misery, these peeps at Oakley go above and beyond. The pair you see here flew off my head this morning. They ended up in four pieces on my kitchen floor. My wife, always the supportive little creature, said something I can’t repeat. But guess what? They snapped back together, nothing broken. Do you realize how incredible this is? I was ready to let myself go, get fat and watch soaps. F%$# yoga.

For some reason, the accumulative effect of these four items has made me feel an overwhelming urge to return to the field to make work. I’m not entirely sure if that will be photographic. It might be a nonprofit. It might be creative in some other way. It might me motion now that I’m a YouTube darling. Wink, wink. Stay tuned.