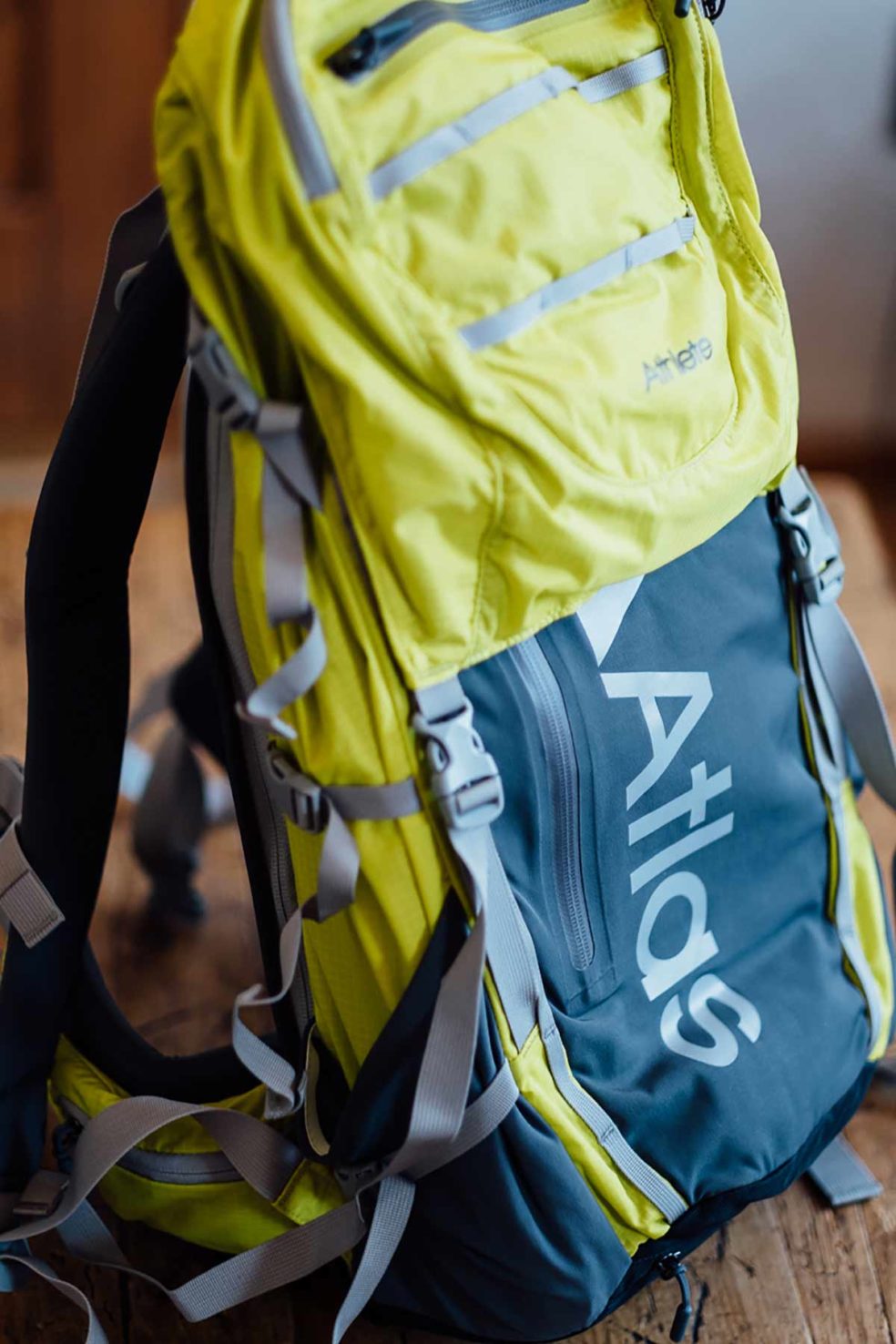 I’m glad several folks have already commented on this post, but I was remiss is explaining that Atlas is a BRAND new company, so their site is fairly bare bones at the moment. This will change in time! If you have interest in their bags then send them an email or track them down via social.

Wasn’t sure where I was going to post this. It was either “Creative,” or “Adventure,” and I went with the more woodsy of the two. Why? Well, let me explain. A few short weeks ago I was having a conversation with a friend and fellow photographer who once hiked nearly a thousand miles across Africa, and like you would expect with two photographers, our conversation wound around until we ended up talking about bags. After years of down health I’m finally feeling fairly decent, so I said to my friend, “What I would love to have is a real backpacking pack that actually held my gear, but I don’t want it to look like a photography bag….at all.” We nodded, grumbled, tossed out ideas here and there but left the conversation with our wish list still intact. And then I went to the Palm Springs Photo Festival…….

As I walked up to the event the same photographer came up to me with a mile-wide-smile and said “Hey, go see Atlas Packs.” “They are exactly what we were talking about.” It’s true. My wish list is now my reality list. 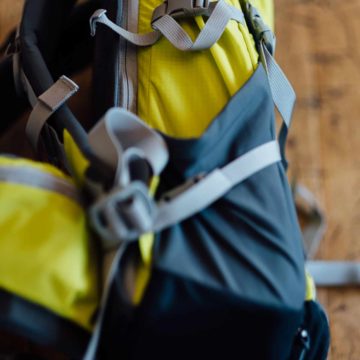 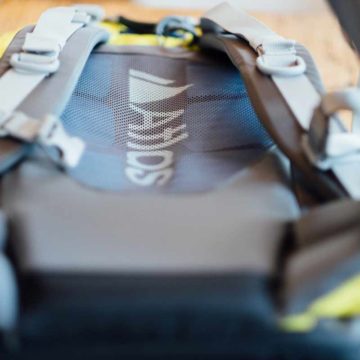 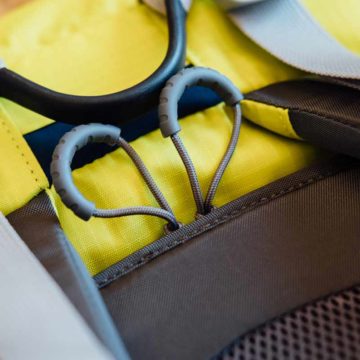 What Atlas, a new brand, delivered is a dynamite outdoor/urban pack. I’ve currently got two models, the “Athlete” and the the “Adventure.”(Will post about this one later.) The pack featured in this post is the “Athlete,” which will be my main pack for both photography and audio. I chose the yellow because I’m using this pack in the mountains, and having a bit of contrast is a good thing when going off the grid. Yes they make this pack in black, and yes I will probably end up with one of those at some point. There are several things I love about these packs.

First, they are lightweight and built like a true backpacking pack so the waist belt goes way beyond being ornamental. This thing holds the pack on your hips, and off your back, like a real backcountry pack. Also, and this is critical for anyone using the pack in an urban environment, the waist belt comes off entirely, which effectively reduces the size of the bag making it easier for things like overhead compartments or even under the seat. Speaking of under the seat. Even with all my gear the bag is still very thin, even nimble. I’m constantly in a battle with size, weight and displacement, and this bag seems to be just about perfect. I can hold my camera body, three lenses, audio recorder, mics, stands, cables and all the extras and still have plenty of room for my “civilian” stuff like journal, books, Kindle, etc. In addition to the gear hauling ability the front section of the pack is one, giant, open stuff compartment, so perfect for my clothes, food and rain gear when I’m in the wild.(And there is an included rain cover.) 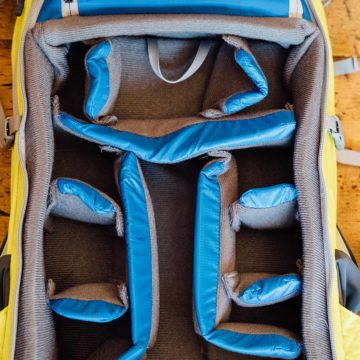 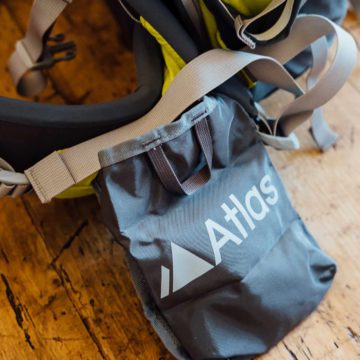 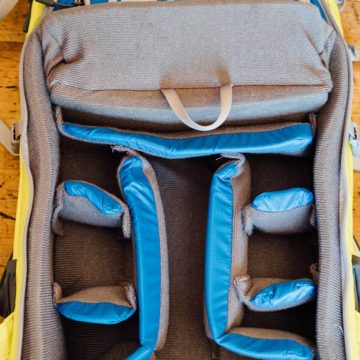 Another thing I love about this bag is an ingenious internal option that allows the user to expand or contract the gear section of the bag simply by pulling a small loop. I can add additional space if I have more gear than normal, or I can reduce the gear section while expanding the main compartment. It’s very slick, and I’ve already used it several times. Each day for me is a new adventure. I might be hiking in the morning, with minimal gear, but then need to do an interview in the afternoon where I need all my camera gear and audio equipment. Boom, I just pull the loop, expand or subtract the space I need and the bag customizes to my needs. Next week I do a three-day San Francisco trip where I need my camera/audio setup, but also need my computer, some clothes, etc. I think I can do it all with this one bag.

Okay, a few more small things. The zippers are great, as are the zipper pulls which are huge loops. Anyone wearing gloves will know how important this is. Also, the waist belt has small bags that pop out of the front zippers. These small bags are great for anything you need quick access to. My camera gear is very small, so I could even hold lenses in these if I needed.(I’d rather just have a second body and never change lenses.)

I don’t normally do gear reviews, but I think bags are something we all need and obsess over, and the new offerings from Atlas bring something new to the conversation. As with all equipment, NONE of this matters until you actually use the pack, so get out there and make stuff happen. Speaking of getting out. If you have intention of seeing The West you better go now. With what is happening with the all-out-war on public lands The West as we know it is officially going away.
If you want to see these places while there is some semblance of wildness you HAVE to go now. Even finding it now isn’t easy. You have to go further out. I don’t want to get too political here, but read up on today’s ruling by Interior Secretary Zinke and you will know what kind of scum we are dealing with.

Below is my typical “Dispatch” setup. Photography and audio.