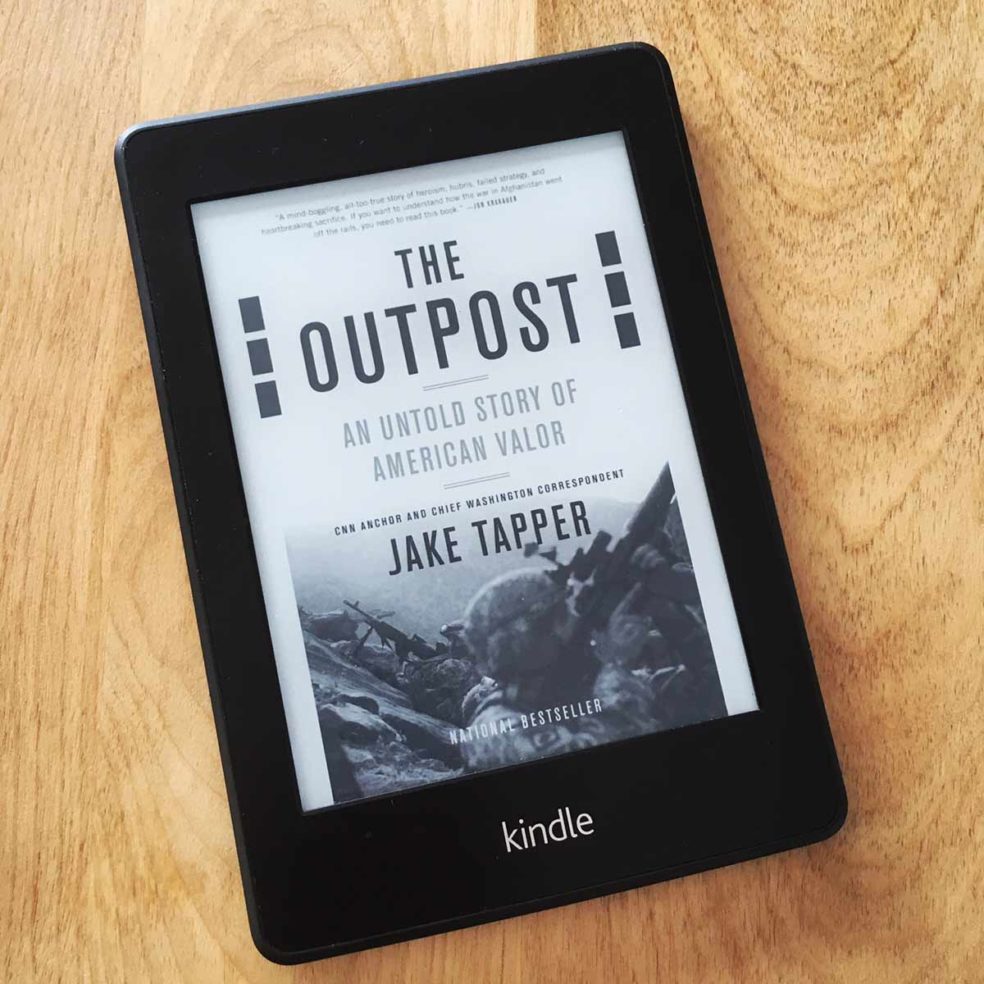 In 1990 I bought Ed Grazda’s book “Afghanistan” in Half-Price Books in Austin. I could have bought a first edition “Telex Iran,” a book that has gone on to become a collectors item, but that is another story.(I also got to meet and hang out with Gilles Peress in NYC.) I’m happy I bought Ed’s book. I actually got to meet him a few years ago and visited his NYC studio. He’s a guy I respect a lot. With this purchase came my interest in Afghanistan. I’ve never been and often wonder if I will get a chance in my lifetime. I truly hope so. There is nothing like it on Earth.

“The Outpost” comes to us from Jake Tapper who many of you might know from CNN. Yes, he’s a journo and has made the rounds at some heavyweight news outlets. I heard him describe recently as “kind of a d$%$,” but the description was meant as a compliment of sorts, saying that in Jake’s job you need a bit of this “dickishness” in you. I’m on the fence here. I think our current system of correspondents being celebrities isn’t working. In fact, I think when someone becomes a celeb their real journalism capability is over. But, I digress. This doesn’t mean one can’t write books, and Tapper wrote a good one, not to mention a comprehensive one.

Why would I read a war book about something that happened years ago? I get this all the time. The single most important statement/observation of this book comes at the VERY end. The America public, for the most part, is completely and uttered detached from the fact we are at war, STILL, in Afghanistan. I’m not sure how many people could find it on a map and probably aren’t sure what we are fighting for in the first place.

Let me just say this. The soldiers in this book, and the rest of them for that matter, are total badasses. Not just because they can bring the heat when they need to but because they can endure, many of them truly believe and they often come from challenging circumstances back home. When you read a book like this you can’t help asking yourself, “What would I do if I was stuck at COP Keating?” The truth? I wouldn’t last five minutes. You’ve probably heard the expression, “The grunt can take it.” And these men and women can and do. But the single most distinctive trait on display in this book is bravery. Placed in an impossible location to defend, in the incredibly remote Nuristan, a small group of soldiers fights against a much larger, more brazen enemy with a serious strategic advantage. There are many casualties on both sides and Tapper first builds us up, introduces us to the people behind the names and ranks and then blows us apart. Get it, read it and learn the backstory of the longest running war he have ever known.