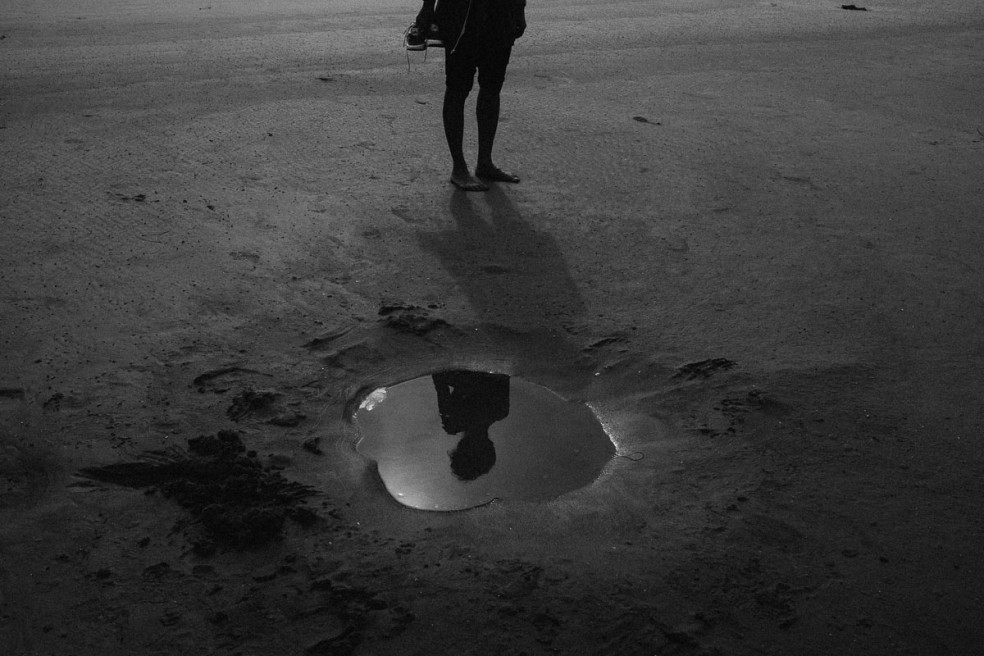 Home together. First time since September. Weather rolling in. Ultra-low tide, heat, humidity and a Pacific of near glass. Neither of know what to make of it all. Wide expanse of beach, high clouds and a peaceful openness that connects with some inner feeling. “If it was only like this all the time,” I catch myself thinking instead of just staring in amazement and appreciating the moment. The now. The right now. The camera as a filter. Shooting aimlessly. Talking serious talk. The future, the past and all things remotely possible. It can be fun but daunting. Sobering even. The now is so elusive, especially when it comes to my fleeting mind. Dolphins offshore. Cruising. A yellow v-hull powered up with a thousand worth of gas and burning it at both ends. What must the critters think. The tips of Catalina through the haze and smog. Like the island in King Kong. Jeff Bridges and Jessica Lange, waiting to get famous. North up the coastline, smokestacks and city. The bay you never knew was there. San Pedro proud. We try lattes to no effect. Then on to cold brew. “That’s been steeped for twelve hours,” she says. “It’s got 1.8 times the caffeine.” “Well then, better just keep it to a double,” I answer. “Don’t want to over do it.” The bars are tight on a Sunday. The noise of the game amid the flicker of lighters, dropped matches and flip flops. Locals. Not fit for public consumption. Doing the desperate. Chemicals and spicy wings. Day in. Welcoming the night. Quarter million dollar cars sitting idle in traffic. Snarling with single lane desolation of the construction. There is justice here somehow. Anyone one does such and such deserves such and such. I don’t know. I’ve never done such and such. Only gawked at a distance like most of us. Sometimes the most difficult thing of all is doing nothing. The pressure and hype is so much a part of the daily now, so when it gets pulled away it feels like life itself if closing down early. “Gone Fishing.” I don’t remember the last time I had her in my sights. It’s been many, many months. How can this be? “I have the cops on speed dial” someone says. Is that good or bad? Shuffling past the multi-million dollar “artist lofts,” filled with plastic surgeons and real estate agents who think art comes in a Hawaiian shirt and hair plugs.