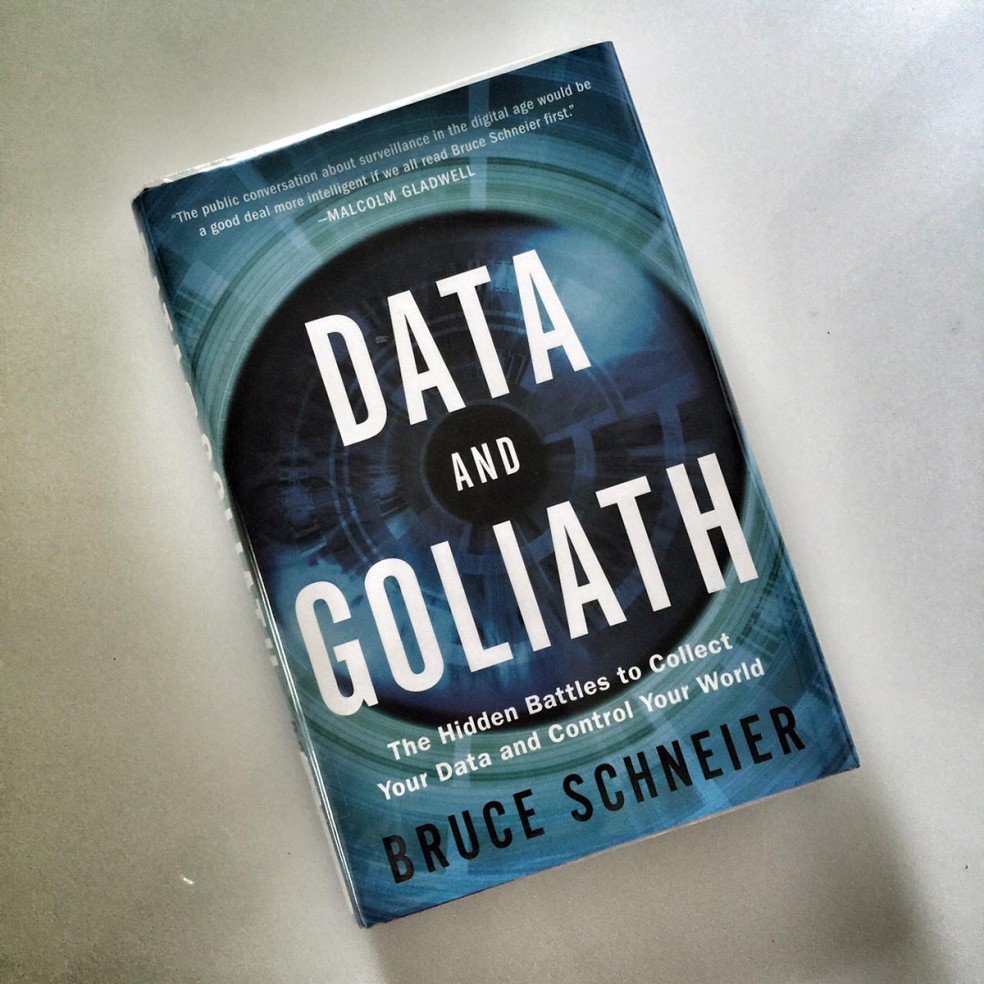 If you read this book I want you to focus on the pickle. It’s a book about big data, surveillance and freedom vs convenience, but I want you thinking like this book is one of those MASSIVE corned beef sandwiches you get in New York. You know the ones where the slices of bread look like postage stamps under a virtual mountain of charred, savory flesh. The sandwich is the key but the pickle should not ever be forgotten because often times is the last thing you taste. Bruce Schneier’s book on big data is something that EVERY American over the age of, well, reading age, should read. Will they? No. Why? Because for some reason many Americans don’t seem to care about much of this. At least until something happens to them, at which time they turn around and try to explain what happened to an audience who…just…doesn’t…care. I did my own little experiment and didn’t find a single person who was interested. Not that my little magazine does ANYTHING for you as a viewer, but when I would bring up the topic what I found most often was RAGE at anyone making an issue over what folks like the NSA are doing on a second-by-second, daily basis. At one point I brought up drone strikes, just because that is a sure way to be viewed as a total kook, and the response I got was, “Well, those people PROBABLY did something wrong and deserved to DIE.” Yikes. That’s like being shot by a cop because he thought you PROBABLY had a gun. But let me get back to this poignant book. What’s going down with data is so far beyond what you might think I’m sure not what you ARE going to think. The book covers not only the nitty gritty, but also real world cases and scenarios I knew nothing about, and good luck finding this stuff amid the deluge of entertainment news. You won’t. It just doesn’t sell like Botox and binges. Two things I took away that might be digestible for you. “Talk about surveillance.” Ya, do it. First of all, it’s an incredibly fun social experiment. Most people ZERO idea what is actually being done with their data. Carrying a phone, using Facebook, allowing varies organizations to track you. Like…how about you go drinking and take your phone with you, which is of course how half the tabloid stories begin, and you then eat at an all-you-can-eat fettucine alfredo place and you post images to your FB page, which is visited by a lot of your friends who also love the all-you-can-eat place. Isn’t that interesting if that data, who you are with, what you drank, what you ate, is then sold to say an insurance company who looks at your lifestyle and asks “What’s the highest insurance rate we can legally charge?” The vapor trail of data we leave behind is being bought and sold and WE are the product. But this topic needs to be front and center. Have we heard ANYTHING about this in the recent debates? And finally, “Don’t give up.” I don’t care how you feel about Edward Snowden. Guy went out on the most fragile of limbs with the intention of shedding light on what OUR government was doing to US and then lying to US about what THEY were doing. And, the facts show this massive deep dive into overwhelming surveillance hasn’t worked, so…why…keep….doing…it? I don’t know Bruce, but I can’t imagine what writing a book like this is really like. You could probably update the book the day after publication because so much of what’s happening is being done in secret courts and without the knowledge of that many folks. Luckily, Schneier DID write this. I “enjoyed” it.