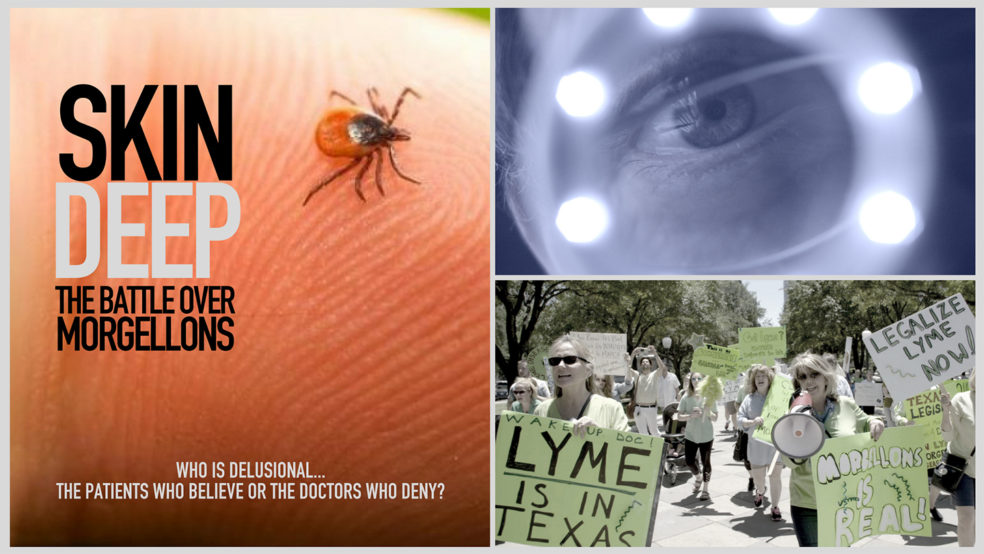 I haven’t posted about Lyme Disease much but not because it isn’t very much a part of my life. Sadly, it is. But, I prefer to look on the bright side. I’m doing just fine. It took four years for me to finally start to feeling somewhat normal. I functioned, traveled and worked the entire time of my illness, which means I’m a lucky one. Lyme has been in the news more and more these days, but the story has still not caught up to the reality. And now the reality is getting damn near out of hand. Throw in all the new tick borne illnesses and you have a perfect storm that is already causing havoc and has the potential to drastically alter life as we know it. There is SO much denial, misdirection and phony information, not to mention outright lies, coming from the government that all I know is that someone has something to hide. Lyme isn’t a “popular” disease in the medical community, neither is Morgellons, which is what brings me to this post. A few months ago I was contacted by a man named Pi, yes Pi, who was creating a documentary film about Morgellons and the fact that Morgellons is potentially linked to Lyme. I had a few thoughts. First, Pi is a really cool name. Second, this guy must REALLY want to make this film because I can guarantee it will not be easy. It’s difficult to explain to people, even friends and family, what it is like to get a disease that mainstream medical either doesn’t believe in or doesn’t want to deal with based on pressures from big pharma or insurance companies or just plain ignorance. I had friends say “Oh, that would never happen,” when I detailed experiences I had a doctors who said “I won’t talk to you about Lyme, and please leave my office,” as if I had nothing better to do than make things up. Please watch this entire trailer. There are some graphic/gross early moments, and I don’t you to get turned off and stop it. You need to see the docs at the end saying “This isn’t real.”

A little information from the filmmakers.

Skin Deep is a feature documentary about the controversy surrounding Morgellons Disease. A group of doctors and scientists claim that Morgellons — a disease whose symptoms include fatigue, brain fog, skin lesions and fibers growing victims’ skin — is linked to Lyme Disease. Other doctors claim that Morgellons is nothing but a delusion, that the patients’ fibers and lesions are self-inflicted. Skin Deep: The Battle Over Morgellons dives headfirst into the controversy. We follow the patients who suffer and the physicians who treat them… with antibiotics or anti-psychotics.

The Charles E. Holman Foundation announced that February 2018 is the first ever Morgellons Disease Awareness Month. Peer-reviewed studies (https://www.ncbi.nlm.nih.gov/pmc/articles/PMC4278782/) report that 6% of Lyme Disease sufferers have Morgellons Disease, and we hope that the two communities can come together in solidarity around issues of patient care and dignity.

Director Pi Ware is an Emmy award-winning editor, a Sundance filmmaker, and a former board member of the International Documentary Association. Pi has created documentaries and narrative films for Warner Bros., Universal, Fox Searchlight, Disney and Sony Pictures Entertainment. To read more about the film, visit www.morgellonsmovie.org. (Kickstarter)

Cindy Casey, the president of the Charles E. Holman Foundation, is a Morgellons patient and registered nurse who is a main character in the film. Skin Deep and the Charles E. Holman Foundation hope that by naming February as an awareness month, people will feel empowered to share their stories so that those suffering from Morgellons Disease know that they are not alone and can send a message to the medical community that Morgellons is real.

I’m guessing that many of you who read this post will say to yourself “I know someone with Lyme/Morgellons.” Sadly, there are going to be more and more people saying that as we move forward into a warmer, rapidly modifying world. This film is worth your time and attention, and even your hard earned dollars if you so choose. Take a look, have a listen and let me know your thoughts. And for those of you with Lyme/Morgellons, keep on fighting.