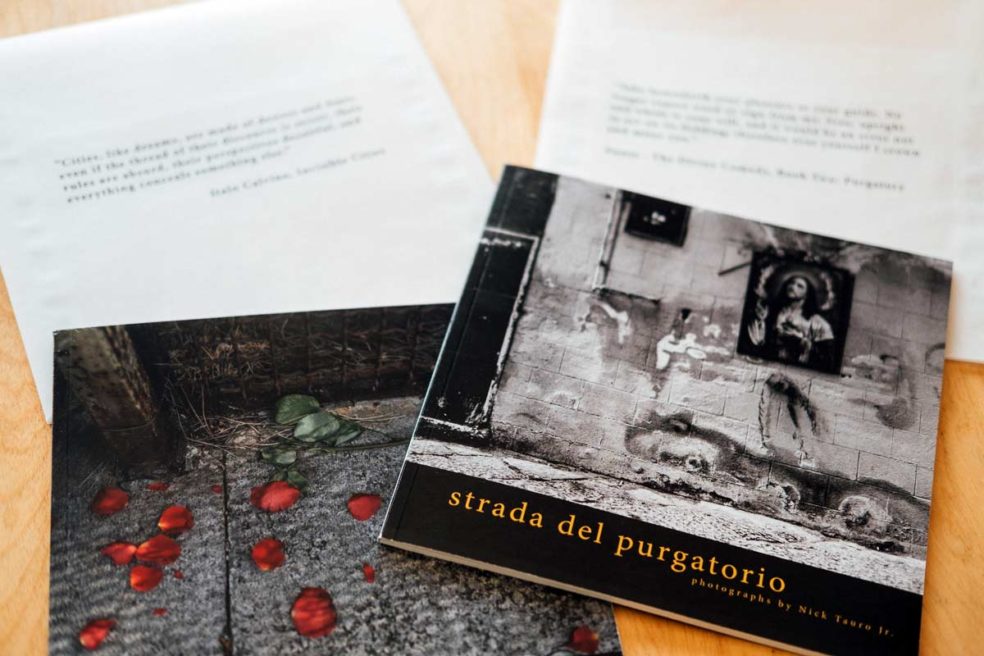 He’s done it again. Nick Tauro shoots, edits, sequences, designs, prints and then makes available his latest work. I’ve featured Nick here before, and I often joke about featuring the same people over and over, but I’m serious in my assessment that the WAY Nick works-when it comes to his publishing-is a way that A LOT of people should be adopting.

Believe it or not, the most common “traditional publishing” situation I encounter is, well, for lack of a better description, photographers pay for the entire thing. Yep, that’s it. Photographer pays upfront, typically between $19,000 and $30,000 for their book. In some cases, the photographers are told never to talk about this arrangement because the publishers don’t want to be viewed as “pay-for-play” publishers. Long live the facade.

I’ve met others who paid more than $30,000, and a few smaller publishers have told me they have seen deals that were in excess $100,000. And people, there is no way in Hell the photographer is making any money back. Even at the lower price points, most people come to me after the fact explaining what went so very wrong. I get mostly sob stories of “this doesn’t work.” The book becomes a two-year endeavor of lost wages and sales trying to sell something that might be living in their garage or living room for that matter. I’ve seen art school professors with offices stacked floor to ceiling with unsold books. I find all of this very odd.

Having said all this, there are still situations where this kind of deal will eventually win out. THANKFULLY. I heard about a guy who allegedly sold a million copies of his book. I hope this is true, but these are very, very rare. Historically, illustrated books don’t sell. They never have, but luckily people are possessed and continue to try. What photographers need to understand is that the world often times doesn’t need another offset, traditional book that requires massive amounts of time, money and further resources. Many of these books are just traditionally published vanity books done because the publisher is making enough to keep their business operating. No support for marketing, no distribution. In essence, just a print job and an imprint.

What Nick is doing, for me personally, is one of the only remaining publishing method that any appeal at all. Even if I had a publisher coming to me, which I have had and turned down, I’m not interested in going that route. Too much time too much money. Too many meetings. Too sticky. Way too sticky. But I have zero ego when it comes to my photography and books, but I know this might not be the norm. (I know it’s not the norm. I’m just being kind. Yesterday, I mentioned a photographer to a friend and he said: “Ya, I like his work, but he’s a total egotistical ass.”)

Nick on the other hand, does his work, creates his book, puts it up for sale and MOVES ON. Once more, HE MOVES ON. And he does more projects. Is he getting rich? No. Is he famous? Probably not. Does it matter? Not at all. I look at what Nick is doing and tip my hat because he’s found a balance and a way to publish HIS work and HIS books.

I just 400 monographs from my house. Each one wrapped in protective plastic. Packed in boxes. I was CURSING so many photographers who fell prey to their egos and printed these MASSIVE books that I so obediently purchased. Damn me. Estupido! Most projects, people don’t need or deserve these books. And the funny thing is I packed all these monographs and never cracked a single book. But I cracked nearly every single small art book, including other books that Nick did. I actually put them in their own small box so I could better keep track of them. Telling.

But the key here, for me, is the edit and the design. Slow down and take a look at these pages, images, and layouts. The real showdown with a project like this comes with the edit and layout. Most people fail, including me, at least a good portion of the time. These layouts aren’t random. I went through these books several times, quickly, and then I went through each one slowly. The edit was spot on. And the image size was spot on. These are things that might seem random or even inconsequential. They aren’t. He breaks out his best images, gives them space and then brings you back in tight with lesser images that are connected via theme or color or content. This is pacing. Good pacing, like a rollercoaster.

Limited to an edition of twenty books. Back to my previous point. This is so smart. Nick emailed earlier and said things were moving, so that’s a good sign. My guess, they sell out. Then what? He gets to do more books and projects. So before you go down that two-year road of “getting published” think about all the options. Have a chat with your ego. Have a chat with your banker. Have a chat with your lifestyle coach. And also ask yourself if the risk versus reward is in your favor. What happens when you put the rest of your life on hold so you can spend your time marketing and selling a book? If you are in your twenties or thirties and this book is going to take eighteen months of your life, is it worth it? Again, some will be able to answer “Yes,” very quickly. Others might need to pause.

Publishing these days can be fast and fluid, traits that used to be associated with the wrong way to do things. But today these same characteristics can be what makes the entire operation work. This goes against the establishment who still has a powerful hold over many aspiring photographers. Be brave. Make your work on your time and continue to be positive. What Nick did with this two books series, a series I really like should be a roadmap for many of us. And yes, I’m sure I’ll be featuring him again at some point.