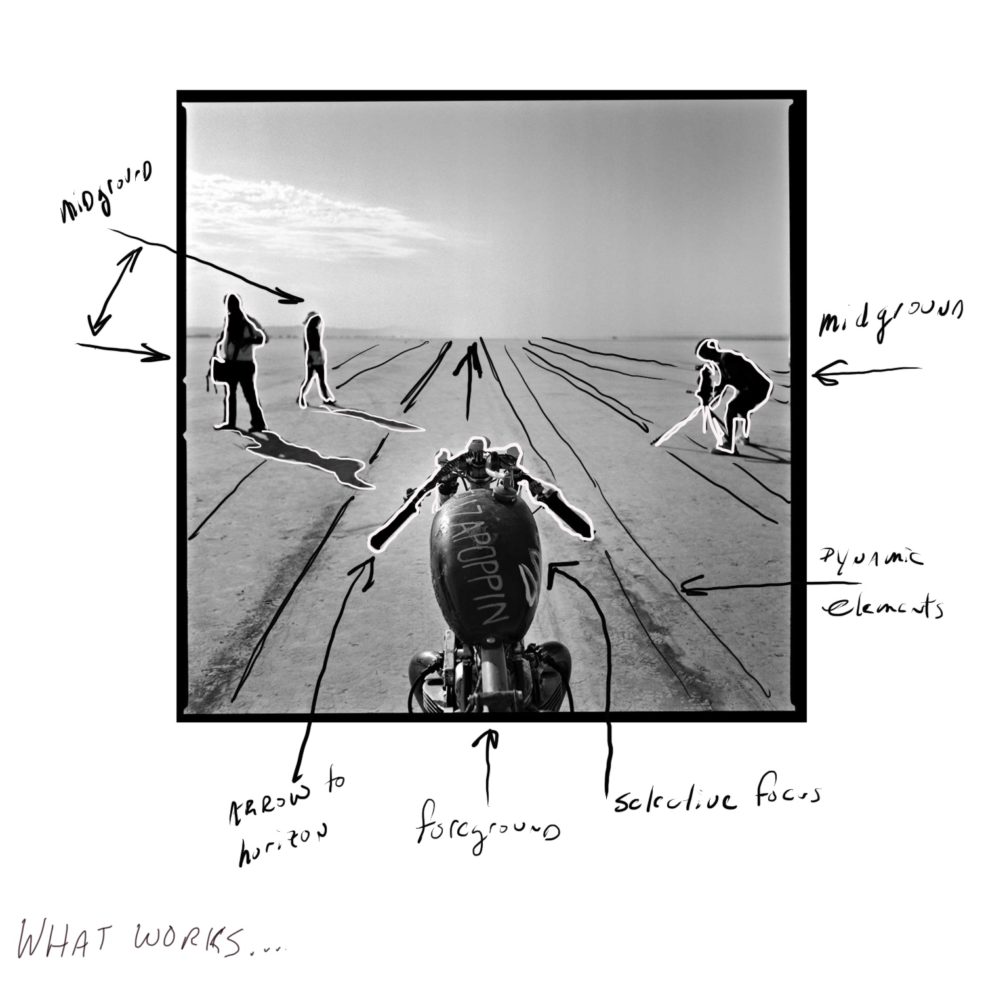 If you have seen a car commercial in the last twenty years then you have most likely seen El Mirage Dry Lake near Los Angeles. It’s close, within striking distance for those Uber hip art directors who venture out for a few hours, get a tiny bit dusty, then tell war stories about being so remote.(Sadly, most ads are CGI now which is code for LAME. Once heard a kid who had been hired to CGI for car companies, for 5% of what the photographers used to make for doing the same job, said his favorite part of CGI was that you never had to get up and watch a sunrise again. ) El Mirage is a very strange place. Dry, yes. Cracked, yes. I’ve seen people camping in black tents in the middle of the summer, and I’ve seen porn shoots with fake plane crashes in the background. When I lived in Los Angeles I would pack up my Honda Transalp and my 4×5 Polaroid and venture out to see what I could see. Those days seem so long ago and so innocent. It was years before the “Great Depression” hit the photography world. Thankfully long before social media, which has turned El Mirage into little more than a checklist location for those making the attention rounds. Joshua Tree, Salton Sea, Slab City, El Mirage,etc. Perfect places to sell the endless pile of free gear. The real problem is you can access the lake in a Honda Civic. I know because I’ve done it. I’m all in favor of gasoline filled trenches to keep the city hordes from taking over.

But El Mirage is also home to the Southern California Timing Association, which is code for people who want to drive really, really fast in a straight line. A VERY welcoming and interesting group. Dedicated, crazed and bent on finding the point of no return. The range of vehicle is wide. Cars, trucks, bikes and rockets with wheels that can hit 300mph. A site to see, without a doubt. I’ve attended their semi-annual event, several times, which is where I made this image, a 6×6, black and white negative made with a $65 Hasselblad and 80mm. This was a tiny part of a larger project titled “Man vs Nature,” which I worked on for about eight years in locations all over the world. Yes, I said “eight years.” People actually did that back in the olden times. 1. Square. I love square. Forget about horizontal and vertical and just shoot. Plus I love the full rebate on this scan, even though this isn’t a great scan because you can see the banding, but hey, this is only a test, so it’s fine.
2. The falloff on the medium format lens. The geeks have parties to get naked and talk about bokeh, all the while shooting pictures of plants in their yard. I managed a four-year photography degree and twenty-five-year career without ever hearing that term “bokeh.” It’s bullshit. Falloff, however, is entirely civilized. The Blad has beautiful falloff. And people you don’t always want massive falloff. You want to hold the precise amount of background information to convey what it is you are trying to convey. Just becauase you have a 1.2 doesn’t mean you shoot it at 1.2 every single frame. In this case I want the three figures in the background to be soft but not totally gone. Add my proximity to the area in critical focus and you get an aperture of about f/4 to f/4.5, and you get my desired look.
3. The handlebars in the shape of a “V” which point at the horizon like an arrow.
4. The lines in the dirt that point toward the same horizon.
5. The three figures in real motion, adding a solid mid-ground layer. Just to remind those who might not know. This is a REAL moment. I never spoke to the three figures while I was making this. Nor did I instruct them, place them, move them or in any way alter their natural trajectory. This is called “documentary photography” which is going the way of the wooly mammoth. I saw the image I wanted, moved into position, waited and then made ONE frame of the moment I wanted. One frame, CLUNK. Hard to believe, I know.
6. The shadows of the two figures on the left pointing back at the area of critical focus.
7. The two top ends of the forks and the stem forming a three pronged head to match the three figures in the background. 1. I’m too far left. I needed to take one small step to the right so the tracks in the dirt would flow on both sides of the handlebars but instead the right side bar blocks the dirt track. This might have happened because I use a waist level finder on the Blad.
2. There is a slight, unintentionnal tilt. Could also be attributed to the finder and looking down. But I still love this finder and wouldn’t change it for anything else.

That’s about it. I’m pretty much a first-ballot Hall of Fame photographer, so just sit back and soak up my awesomeness. I shot a half dozen rolls this day, of 12-exposure rolls, and ended up with about ten images that made the cut, one of which is an all time image for me. I also shot a few rolls of 35mm.

What did I do with this work? Nothing. Where was it published? Nowhere. For those of you who don’t know me you need to understand how selfish I am. My primary reason for making pictures is to live the experience of making them. This is a greedy, solitary pursuit. My second reason is to record. Data. Visual data. Record it, preserve it, move on, and hopefully have it utilized for historical purposes sometime long after I’m dead. Lastly, I don’t care about being known as a photographer, or building an audience, or selling shit. I’m in heaven simply by being there, talking with people, attempting to understand their course through the obstacle course of life ,and from time to time, hearing the occasional thump of the Blad’s shutter.