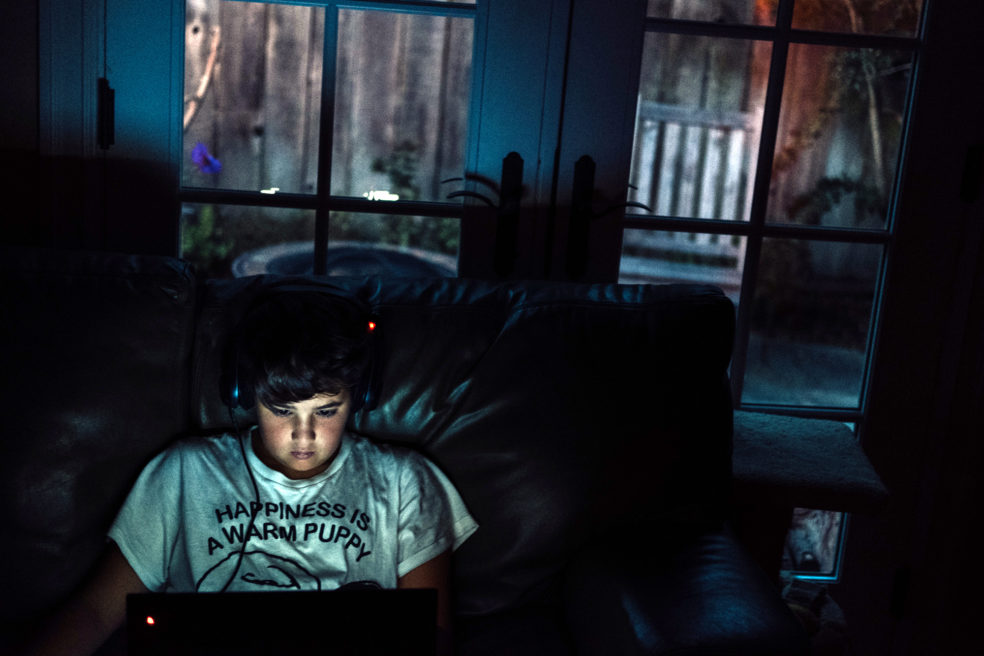 For those of you who have been reading my site for any length of time you will know about “Super Dynamite,” my soon to be twelve-year-old nephew.(More of him here and here.) I haven’t posted about him in a long while as he’s at the age when my photography isn’t high on his list of priorities and he’s too smart for me to trick him into anything.(God I miss those days.)

But early this morning I was able to trap the elusive beast. Just for a moment. Chalk it up to his being blinded by a screen, whatever, I’ll take it. But there is more to this photograph than just the subject. This is a digital photograph I actually like.

Yesterday I had a meeting with two friends, both photographers. One was carrying a Pentax ME Super and the other an ancient Contax SLR of some sort that must have weighed eight pounds. Both of these people know me as more of a Leica film guy because our history goes back many years. But yesterday I brought my Fuji, and for the first time in my adult life I didn’t feel like my “real” camera was at home. The XT2 probably isn’t perfect, but it’s damn close to perfect for me and my current set of needs. Light, small, relatively fast. A solid viewfinder, sensible layout and menus that even I can understand.(I’ve only looked at maybe 5% of the menus.) I also like the lens selection which feels very similar to my old days of using the f/2 Leica lenses which are mimicked nicely by my f/2 Fujicrons. And I have a fast 85mm for portraits.

Beyond the hardware there is the look of the file. My post production method is as painfully basic as you could possible imagine. Import, apply one star if I like, apply preset, export. THIS IS ALL I WILL EVER DO. I hate post and will never sit and tweak my files beyond this little sequence. My heart just isn’t there. But I have to say, this is enough. The color out of the camera is superb. I’m sure there are a hundred million thousand reviews out there that will give you all the tech juice about this camera but I’m not concerned about that stuff. It just f^%$%$# works.

A few folks have said “Oh, I have to have full frame.” I used to think that way too. Okay. I get it. But most of the time I don’t. I’m guessing I can do a 24×36 easily with this camera and probably a 30×40 if I wanted to. What the Hell else could I possible want, and frankly my fav print size is 16×20 which would be cake with this baby. And the reality is I make more 4×6’s than anything else, and by a long shot, and I surely don’t need to archive massive files.

I guess my only issue is that I only have one body, and the few times I’ve been in real shooting situations I’ve felt like I was missing things due to not having the second machine ready to go. But oh well. Life is a neverending, intensely cruel suckfest and then I get a disease and walk into the swift current of death. Or something like that. But, in the meantime I’ll be snapping away. Happily once again.