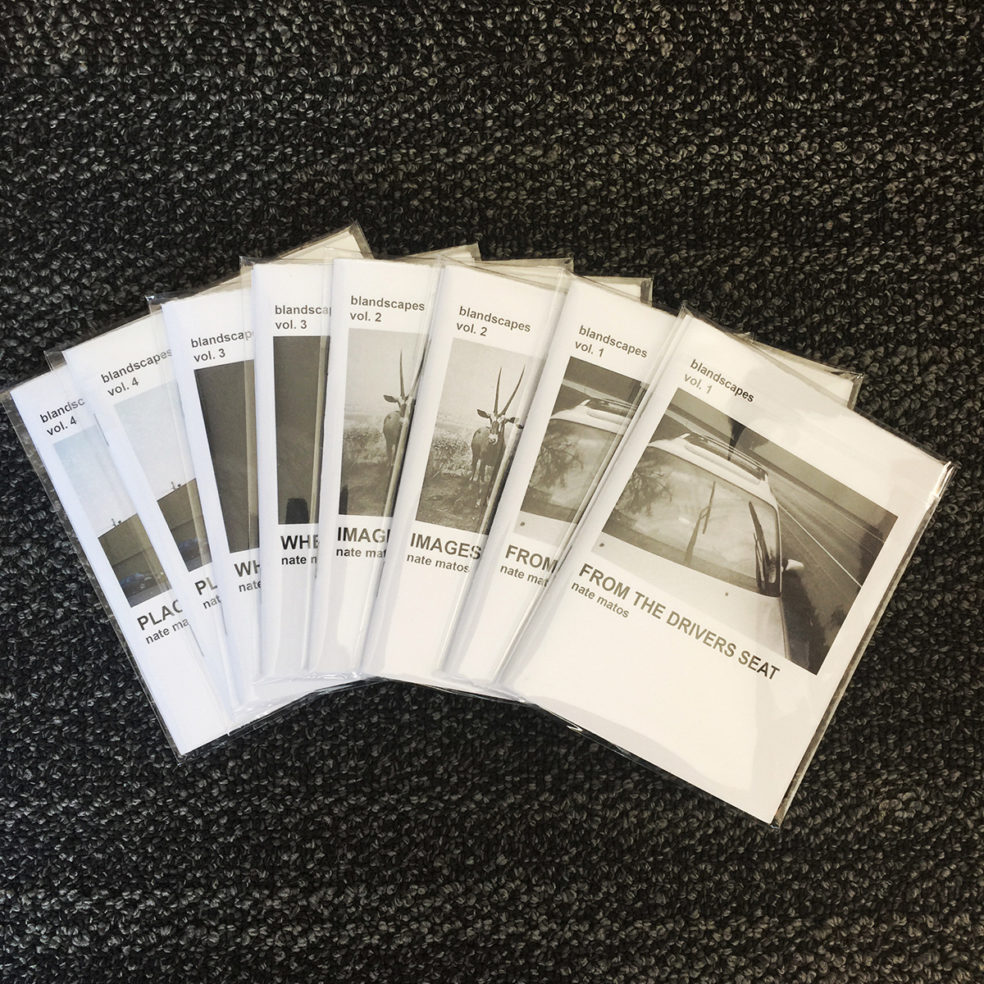 I’ve featured Nate here many times before, but he keeps doing creative things so it’s not like I can stop featuring him anytime soon. I admitted I was officially jealous and angry of his prolific contributions. But I’m not nearly together enough to do what he does, so I’m happy to let him continue to carry the torch.

I’ve explained before that I now have an “alternative” section of my illustrated book collection, and this new section is, by far, the most interesting. In fact, I’ve stopped buying classic photobooks for the most part. Most of them are too predictable, too stoic, too expensive and too safe. The indie mags, the Zines, the small art books, the editions of one are about all I look at, so when I got a box in the mail from Nate I knew whatever it was would be destined for my “alternative” section. What you are looking at is “blandscapes.”

I wanted to share with you a few images of what he has created, and also share a small interview I asked him to indulge me in. At some point I want a face-to-face interview so we can flush out the granular stuff. Until then….. 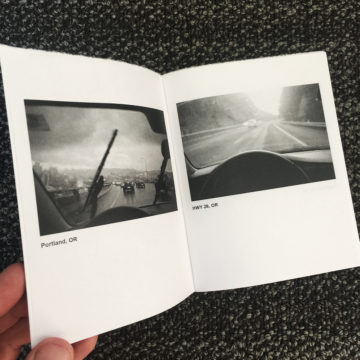 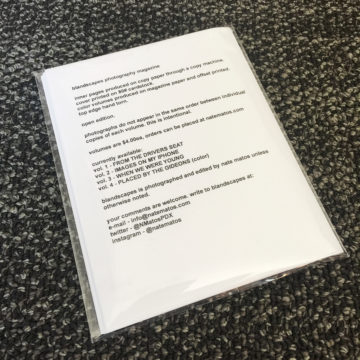 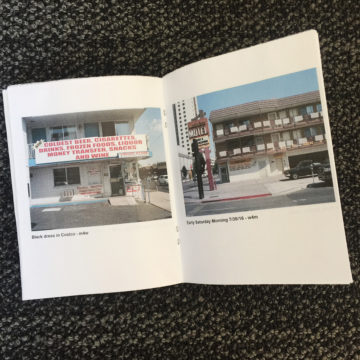 Tell us a little about yourself.

What is there to say? I’m on the cusp of 30, and have lived in the Portland, OR area my whole life. Being in an area that (like San Francisco and other urban areas) has seen rabid development and gentrification over recent years has shaped my world view. The structures I once saw as permanent installations in our man-made landscape have become an ever-changing component.

Day to day though I work with spreadsheets, it’s not as exciting.

I just received “blandscapes” in the mail. Now I’m jealous and angry that I didn’t think of this first. How is it you are so productive?

I go through spurts of rapid creativity. After I closed out Serif & Silver in March I thought a long time about where to go next. I was approached by PRYME Editions to produce a limited-edition Serif & Silver Compendium Box Set that ended up caring me through into the summer. When I was finally able to wrap that up I needed something drastically different. Blandscapes came together over the course of an evening sitting at my computer, each piece happening almost by accident.

For me being productive comes from a desire to stake my claim. Years ago, while walking down the street I was suddenly approached to be a part of an art installation. A photographer had a board and camera set up, and was asking each passerby to write a goal they’d like to achieve on it, then have your portrait taken. Mine was very simple “Have a Wikipedia page”.

That’s been my line in the sand for some time. So much of the creative industry is fueled by self-promotion. You push your Instagram, collaborate with others to broadcast each other’s message, hit the pavement finding any coffee shop or book store who will take you in and give you room to offer your work to the world.

But Wikipedia is different. You don’t have control over it, you’re not allowed to create or edit your own page, sources are required. Because of that it means that someone else has recognized you and your work. It’s a way of making it without having to have found yourself selling out or schlepping products on your timeline because your following has caught the attention of a company.

Each thing I do is to push me closer to that goal. Will blandscapes get me there? No probably not. But it is a stepping stone, it gets me into the mindset of my next production, and has already influenced the publication I just finished. Though that one remains under-wraps for now.

How often are you in the field making new work?

I used to be much more proactive. Shooting anything that would come across my field of view. But over the last 5 years that mentality has relaxed quite a bit. Realizing that you need to do something with your work, behind the scenes, after the images have been shot is a key component. Ignoring that aspect would be like opening a restraint without having a menu or kitchen staff.

I’ll look to get out on weekends, and have been trying to travel more. Flying to a new location every other month. But the bulk of my work still comes from my immediate area.

Everything you do ends in print. Why in 2017 is print so important to you?

I look at photographs as another language. Instead of nouns and verbs it’s light on a medium collected multiple times in different ways forming the story. Because of that, I find there to be two true ways to share images, in a gallery space, or a book of sorts.

And let’s face it, galleries are hard to come by, but anyone can produce a printed collection of images. From books, to zines, to folios of prints. There are countless ways to get work out into the world, to create something.

You also have a serious analog problem. Haven’t you heard “Digital is better.” Why analog?

I’ve heard digital is better from all different kinds of people, and I’m not sure that’s true. A lot of people will view that sentiment as saying analog is better, which isn’t true either. For me, when creating an image, there is a comfort in knowing that every time I hit the shutter I am creating a physical object. Once developed it becomes a part of a literal collection of mine.

But I do still use digital cameras. My approach is that if it captures light in a way that I like, what is there to complain about? Between you and I, there are quite a few iPhone photographs spread through all four volumes of blandscapes.

Who are your print influences?

It’s a cliché, but anyone doing their own work. I try to buy zines and self-published works whenever I am in a new city. They’re like souvenirs, and great ones at that. It’s hard to find stand out work without being directed to it, but walking into a small bookstore can offer you with a wide array of local photographers you’ve never heard of. Each producing a book or printed piece with their own unique touches. The fact that people are out there making, that’s my influence.

You knew there would be a Blurb question at some point. You used Blurb in a very unique and specific way for “blandscapes.” Tell us more.

I think a lot of people take Blurb at face value – using it explicitly for the printing of their own work in one of the pre-defined methods. I like to look at Blurb as a printing service like any other. It’s a jumping off point and not a finish line. But this is the first time it’s been a means not an end for me.

By using the Blurb economy magazine format, I could retain the low-fi look and feel of the other copy machine volumes, and most importantly the low cost. Since the magazine format is an 8.5×11 size, it was simple to take the existing layouts I had created and import them into Bookwright. From there it was just a matter of receiving my order, slicing off the spine, and going through my standard workflow.

Recently I bought a brilliant photo book from Mack Books. It was constructed with no front cover, no spine, and only mounted to a piece of cardboard on the back to offer rigidity. The slipcover, rather than wrapping the two covers, instead wrapped around the entire publication creating a sleeve that enveloped itself. My first thought was, I could do this with Blurb, I’d just need a knife.

What would you love to see from Blurb in the future?

Bottom line: more paperback cover options. While the standard glossy cover works, I find it’s often too formal for most of what I’d like to produce. Being able to use the Blurb Proline Uncoated for my covers would be phenomenal.

Other things include a 4×6 trade format as I find the 5×8 a little too large for informal publications, and an embossing service. Though I know the latter is unlikely to happen.

In addition to your photography, design, publishing and probably seven other cool, creative things you do in life, you also have a podcast? True?

I had a podcast for a number of years called Pdexposures. As with all things it came to an end, and I’m alright with that. We put the podcast together because no one else was doing what we thought needed to be done for the film photography community. Over the course of a few years, a few other podcasts were started, each bringing something new to the table. It didn’t seem right to be stepping on others toes for the sake of our own vanity.

What are you going to be doing in ten years?

Worrying about turning 40, and maybe re-reading my Wikipedia page.