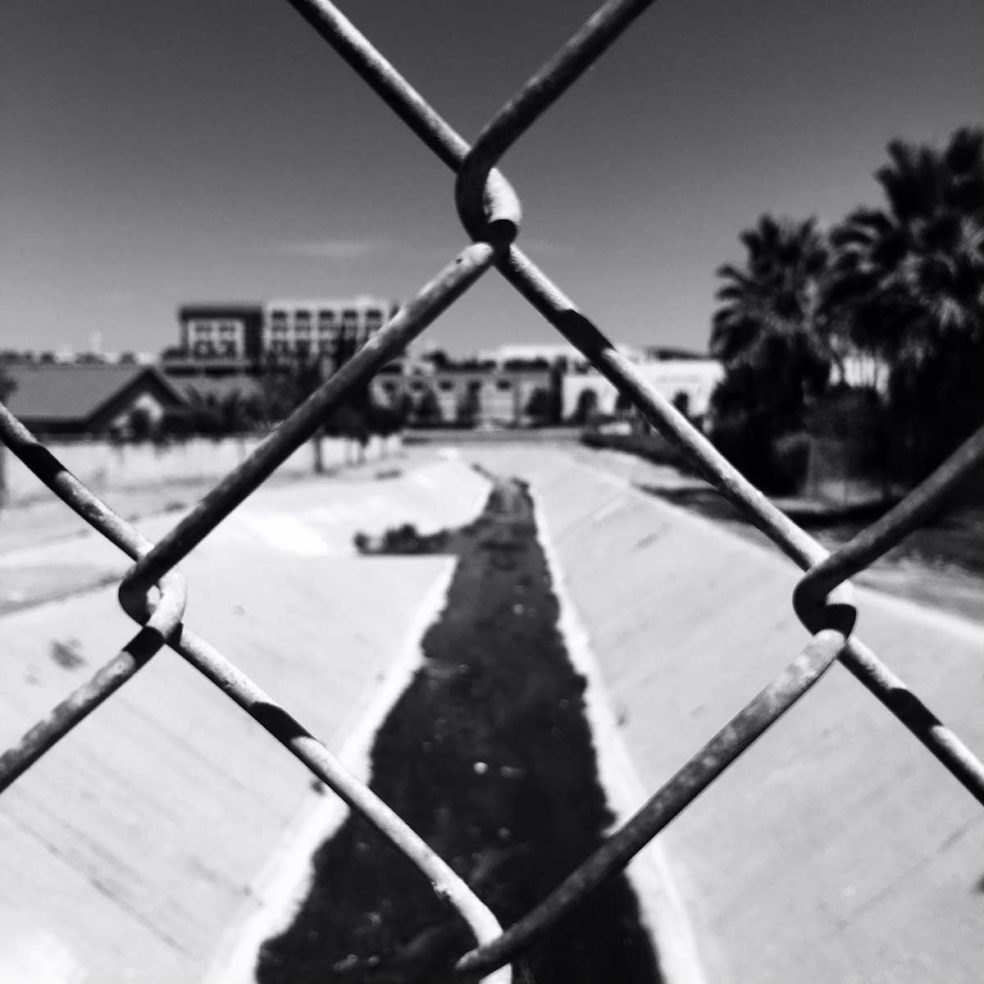 Endless rivers of moist concrete. Lost bits of human ephemera. Traces where transient man used to be. Walking here is strike one. Motorists isolated in their metal coffins, clutching phones in sweaty hands, just try to make it through as they stare in wonder as to what misfortune led to your feet touching ground. Bedroom communities, strip malls and the California blue collar workforce of the service economy. Zoning laws abandoned in the need to create the cheapest boxes possible. An army of terracotta tracks. Satellite dishes, new cars and the largest television possible. Comfortably numb.

Upstairs windows open. Attempting to quell a ninety degree day. Storage units for things next to storage units for humans. Industrial smells. And the trash of the recently homeless. Scavengers mugging water dispensers. Living in cars. Looking for cheap mobile plans. Where do you go and what do you do when there is nowhere to go and nothing to do, but survive?

A father and son. Proud, clean and uncertain. He tries to lead by example. They have the makings of a campfire of modern life, but the spark eludes them. I feel for them, for the boy especially. Does he have a chance? Yes, he does, but that chance requires flight. And sooner as opposed to later. Gathering near the dispenser of sugary drinks. Thai food, sushi, window covers, nail salons, tea shops, butchers, lamp stores, drug stores, tire stores, tattoo shops, laundry facilities back to endless back. An installation of the worst art man or woman can imagine, pitch and then create. There is seemingly no end to it.

Eyeballs at street level looking up at me. The whites are white, brilliant white you might say. A jar of jam, broken and smeared. A dead pigeon. A pile of children’s underwear. I walk from concrete to glass to dirt and then back again. The cop gives me a slow pass. The rainbow colored Cotopaxi bag and my blue shoelaces must have been reassuring as he or she punches it and departs.

Killing time while lost in time, and space. “What city are you in?” she asks. “I don’t know, they all look exactly the same,” I answer. How on Earth did we devise a place like this? I stop and stare, eyes moving from one edge of the view to the next, looking for the good, the beautiful or the hope. Bits of nature pushing up through the darkest of dark. Reminders that we are temporary, but this place will not be erased until end times.