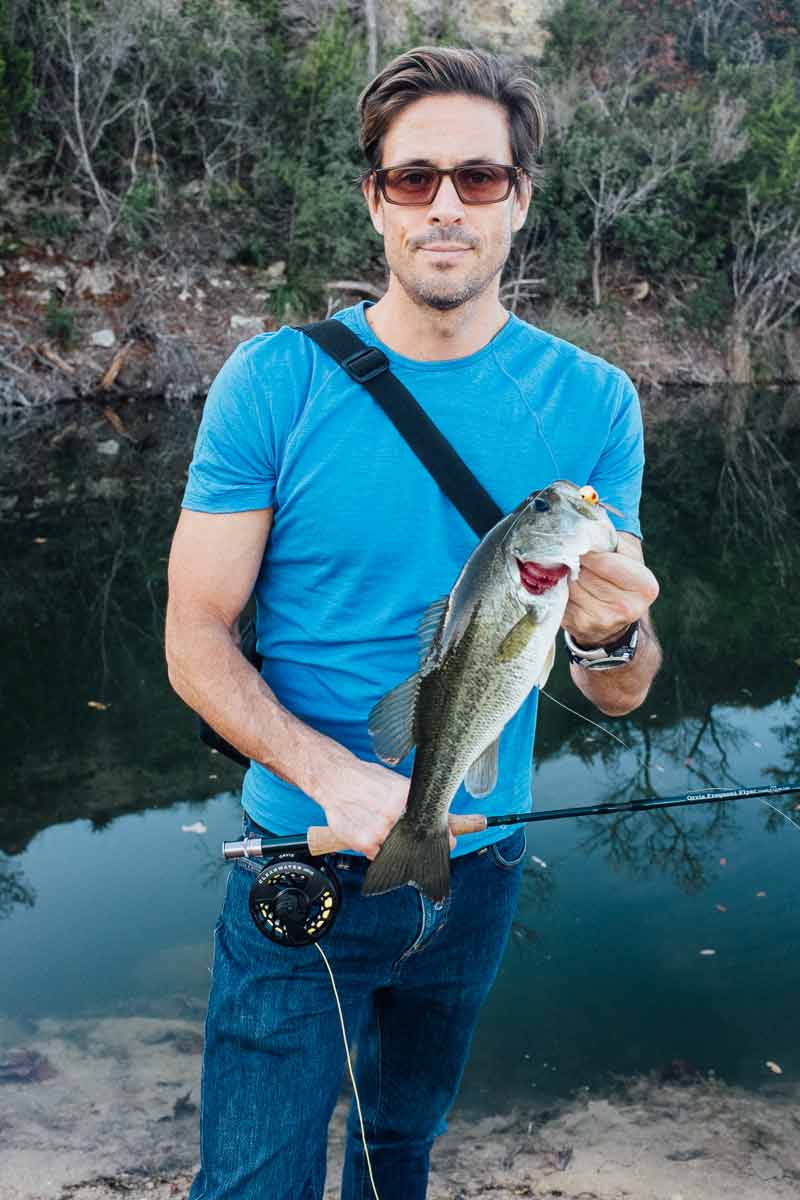 I think you might have seen these images prior to this post, but they were posted BEFORE I made all these recent changes to the site. I didn’t have an “Adventure” tab before, so these images were only posted on their photo merit or postcard merit. But now I can explain myself. I grew up in an outdoor family. Hunting, fishing, hiking, riding, paddling, etc. It began in Indiana, continued to Wyoming and Texas and still continues in both California and New Mexico. The rest of my family still resides in Texas, and I try to get there as often as possible, which frankly isn’t often enough. Old neighbors of ours in San Antonio now live on ranch outside of Blanco. Their property has a small river on it, cutting beautifully through a series of outbuildings and ranch facilities. Nobody fishes it. My mother taught me to fly fish when I was in elementary school. She also cut my hair.(See attached photo.) So from around 1977 on we have been fishing together. All over the United States, Canada. She is good, but I continuously remind her, I’m better. I’m really no better or worse, but I like to try and rattle her. So before a day like this I will be talking smack as much as humanly possible. “Are you sure you aren’t too old to go?” “Do you want me to remind you how to fish?” “What are you going to do when I catch all and you catch nothing.” She gives it right back. Sometimes I will be minding my own business, casually glance in her direction and she will be silently holding a fish, waiting for me to turn and notice her. Not saying a word…just waiting.

So this particular day was special for a few reasons, but namely because I hooked, then lost, the largest bass I’ve ever had on, and in the process experienced something I’ve never seen before. I’m typically throwing a very light trout setup, so under-gunned for Texas river fishing. The river itself is the width of a perfect cast, as far as I can throw a line with a 6w rod. I tied on a topwater bass popper and landed that baby inches from the opposing shore. BOOM. A tiny bass came up and sucked it down. The water is clear so I could see the little bugger trying to get away. I slowly lifted my rod tip and hauled the fish straight up and to the surface, then quickly stripped in line affectively pulling the small fish across the surface.

And then Moby Dick decided to eat my little fish. The largest bass I have ever personally seen came up from below and swallowed the fish I had on. Fish on fish action. At first it appeared as if a white bucket was floating up undernearth my fish, but it was the mouth of the largest largemouth I’ve seen, and it made a giant sucking noise as it sucked my little amigo, and my topwater popper, down under. And I mean under. Straight down actually.

I looked over at my mother who had witnessed this little event and she said “Uh oh.” She walked over to me and we stood watching the end of my severely bent rod tip. “That thing is going to break your rod,” she said, and I knew she wasn’t giving me the business. She meant it. I felt like Jimmy Hoffa was on the other end, or a lead bar. The fish didn’t move, and I had no ability to move him or her. We waited. And we waited. Mom got bored and wandered off to do her own fishing, and I thought of how incredible it would be if I could land this thing.

If you have ever handed a fishing rod to a small child then watch as they feel their first fish then you know what getting a strike feels like. It never gets old. Some people devote their entire lives to it.

Then suddenly the beast was on the move. Straight up. The surface of the river boiled as the massive mouth once again opened, this time spitting out my battered, well chewed little amigo and my destroyed fly. I was face to face with the beast with only six inches of clear water between us. “Jesus Christo,” I uttered as the bass hocked it’s foreign catch up and out then slowly faded into the depths. Believe it or not my little amigo was still alive. Confused, surely, but alive. I kept him in the water, took my fly out and made sure he was good to go. He flashed his tail which sent river water into my face, but I felt that an honest trade.