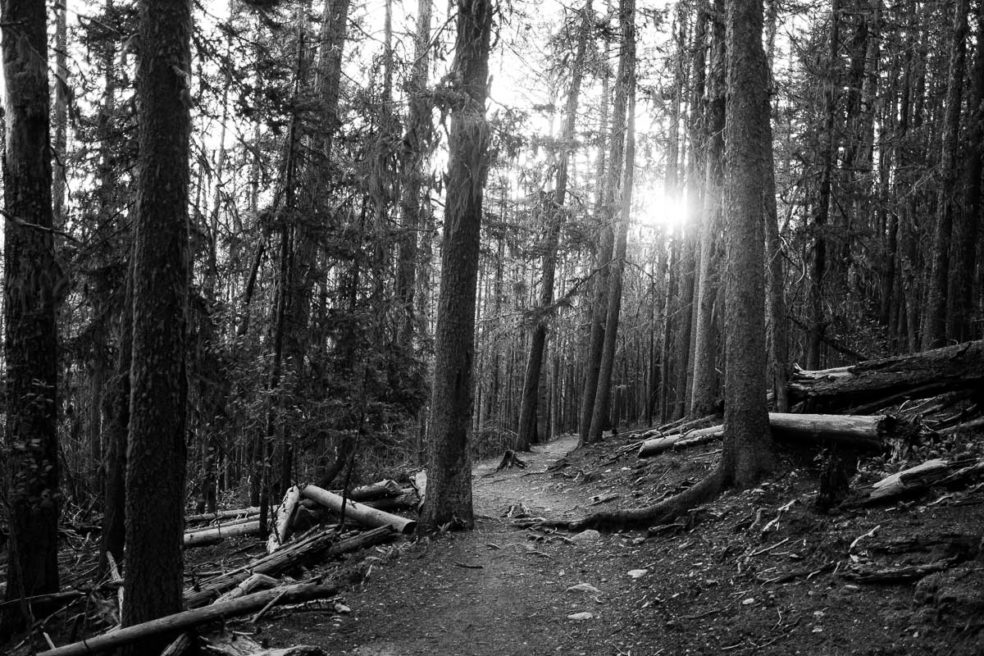 My first time hiking Baldy alone, which was fantastic. Not that I don’t enjoy hiking with friends, I do, but working alone allows for the mental and physical games we play. I left the parking lot at 6:15AM but should have left at 5:15AM with headlamp. Summer in Santa Fe, a Saturday, just asking for trouble with the masses, and today was no different. Lesson learned. There was however the games we play when the public is involved. Found two hipsters about two miles down the trail. Dressed for a day at the mall. No water, no food, no jackets. And apparently zero understanding of where they were or where they were going or the fact that the top of the mountain would entail…climbing up? I told them “Hey, no sweat. This trail is a breeze. Flat, fast and easy. I say go for it! Water is for quitters.” My goal for the entire trip was four hours. Why? No idea. Just seemed like a crazy number, and something I could keep in the back of my mind. The weather was perfect, the light so swelligant. And it was deathly quiet inside that forest due to an almost creepy lack of wind. I did hear fallen trees moaning as they rubbed against each other. That almost gave me a death shiver. I cranked up the mountain. A fastest possible walk. Were this my first time on this hike I would not have done this. I would have gone slow and really soaked things in, but again, I knew the crowds would be mustering around their trifecta hotel breakfast of gluten, sugar and dairy, and would be coming up the mountain as I was coming down. For some unknown reason I felt great. Like I could run the entire thing, but being 49 I realized I was delusional and would regret this action had I taken it. So, fast walk. Three liters of water in my bladder. Not my human bladder, my plastic one. One small bottle of coconut water. A Gu shot. A power bar of some sort which tasted like a dead elk with hoof and mouth disease. I summited alone. Just me. All by my lonesome. Entire place to myself. I dumped all my trash, spray painted all the rocks, started a small landslide and washed my clothes in the lake using non-biodegradable soap and synthetic dye. I felt good about doing my part. The downhill was where things got interesting, and funny. Oh the masses. Oh baby. So great. There were some real gamers, people were giving it a go and more power to them. And then there were the walking statistics I’ll look for in tomorrow’s paper. You also had the orgy of maps and apps and iPads and Garmin’s and tech insanity, all for a seven mile summit. A trail that is IMPOSSIBLE to get lost on and you need a satellite dish strapped to your head blue toothing real time data to your phone which is synced to your GPS which is relaying the experience to the rest of the family back home in Arkatucky. And the conversations are enough to answer any and all questions about how Dipshit Donny got elected. As you can see, my hiking training came from Camp Zapatista. I love to wear the buff over my face like a bandito, this way approaching hikers have a moment of “Oh shit, are we being robbed.” I even had one particular dog see me, freeze, wail and start running back the other way. Mission accomplished. I’m here to fear.Oh, and that hair was accomplished with zero gel, paste, mold or goo. Stay tuned for my grooming tips channel on YouTube. Now, maybe the best moment of the hike, for pure insanity, was just near the end. An older woman and her husband. He was grimacing and looked like he might not make it back. They were only two miles from the trailhead, so they hadn’t come far, but again, they were going for it so I tip my hat. I get about three feet from her and her phone rings. She grabs her phone, answers it and then steps directly in the middle of the trail, sideways, blocking the entire path. I stop one foot from her face then stand motionless to see what happens next. VERY SLOWLY she turns her head in my direction, never actually moving out of the way, then VERY SLOWLY turns her head back straight and never moves. Not an inch. “Oh hi Marge, oh ya, we are climbing in Santa Fe, we’ve done four miles.” I’m still standing there. I can see the blood vessels in her eyes I’m so close, and she completely and utterly ignores me. By this time I’m so intrigued by how this could happen I’m giddy with excitement. Then, from far, far back I hear her old man “What are you doing?” “Get out of the trail.” And like Excalibur’s sword being pulled from the stone she begins to shift. Sparks, lightning, planets colliding.

Full disclosure. About a mile from the trailhead the outside of my knees began to hurt so bad all I could think about was ibuprofen. I began to dream about the little orange pills, or blue pills or even the shitty looking white ones. Any pill. I would have done heroin had someone provided the needle. This pain is normal at this stage of the hike, but it was worse today, so I need to figure this out. Lack of weight training? Shoes? Speed (I shaved two hours off my last trip.)

So, I’ve made fun of lots of people in this post, but I mean none of it. Well, almost none. It DOES beg the question of how do you interface more and more people with less and less land? There is something so great/scary/pure about being alone in the woods, so by the time I get back to my truck the parking lot looked like D-Day in Normandy. Troops massing. Parachutes. Chow lines and a bathroom that stank like God died and then died again. The FIRST thought that popped in my head when I hit the start button on the trusty Tacoma was “Alaska.” Sorry Alaska. I know there isn’t room for us and you don’t want us even if there was, but my second thought was “timing.” There are simply too many of us, and too many who want to do what they see others doing on the Internet. So the timing has to be pushed out and back. Deeper into the fall, earlier into the spring. More remote places. Longer approaches. More knee pain. More heroin. Surviving on spores and fungus. Okay, wait, maybe that’s a bit too far. For now.

I was going to say “get out there,” but let’s just hold off on that.